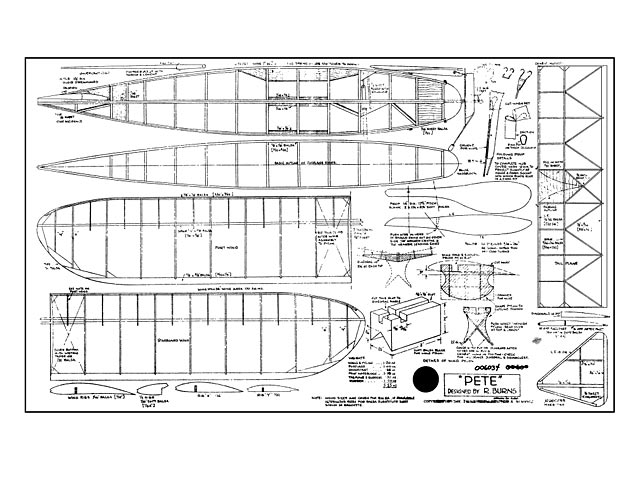 Quote: "THIS 'plane was built in an attempt to solve the problem of 'to streamline or not to streamline' and whilst it did not decide that at all it did prove that by careful arrangement of the parts it is quite possible to get an excellent performance out of a box model. The use of a folding propeller was contemplated from the onset and, since this involves a low thrust line position in order to counterbalance the CG shift, it was decided to see if any advantage was to be obtained in the way of reduced interference drag by putting the wing on a short pylon mount above a diamond fuselage.

In practice, this worked surprisingly well. The model was flown all last summer - and incidentally, had extremely bad luck in the way of 'tree-top perching'. The usual duration without thermals is in the neighbourhood of two and three-quarter minutes on 1,100 turns.

Building the model is quite easy, but I propose describing the folding prop and wing mount in some detail. The wings themselves are quite conventional. One point to bear in mind here is to pack up the front of the trailing edge about 1/32 in when building to avoid a flat bottom here. The tail-plane is built up 'Air Cadet' fashion with the centre-section sheet covered for additional strength. The fins are built flat, covered and doped and then cemented to the tailplane end ribs. The fuselage is reinforced here shown with 1/16 sheet and the undercarriage system is similar to that introduced by Mr Rippon and fully described in the Aeromodeller in connection with his model George (oz8986).

Carve the prop blades from soft balsa - if obtainable - and sandpaper to final shape. Put the bearing in place temporarily, and then take a 3 in length of 18 swg wire and push it through the hinge line. It ought to be 1/10 in nearer the hub and 1/10 in nearer the leading edge on the one side of the blade than the other. Hold the ends of the wire, with the blade erect so that you can see through the hole in the bearing, and allow it to fold without moving your fingers until it is pointing straight away from you. It should be flat and in line with your eye, not lying to one side or the other. If necessary, move the wire to a new position in the blade and try again to get this right.

The hinge wire must duplicate the position of the 3 in wire exactly, so cut a notch in the blade to expose the wire and take it out. Now bend it to occupy the slot while the two ends are in contact with the blade faces and opposite one another. The short length which lies in the notch must be kept straight during this operation so hold it in the jaws of a pair of pliers whilst doing any bending near it. The wire must not be an easy fit and should not be sprung into place as this will probably lead to the blade angle being altered when it is finally cut loose.

The hinge is completed by cutting a diamond shape from a tin can (scissors will do this) and folding this over the straight part of the wire, clamping it with pliers. Rub the straight piece of the wire with blacklead and solder the two ends of the tin together - the blacklead will prevent the whole thing soldering up solid. Now put the hinge in position and lay a piece of wire along the back of the hub which should project an inch or so beyond the end stump. Solder this to the hinge. Later this is bound and soldered to the balance arm itself to give it greater rigidity. The wire should be placed in a groove in the hub and this and the hinge wires bound and cemented in place..."

Quote: "Hello, I sent a comment that 'Pete' was in the July 1942 issue of Aeromodeller, I have since copied the two pages, see file. I love your site, glad to add something." 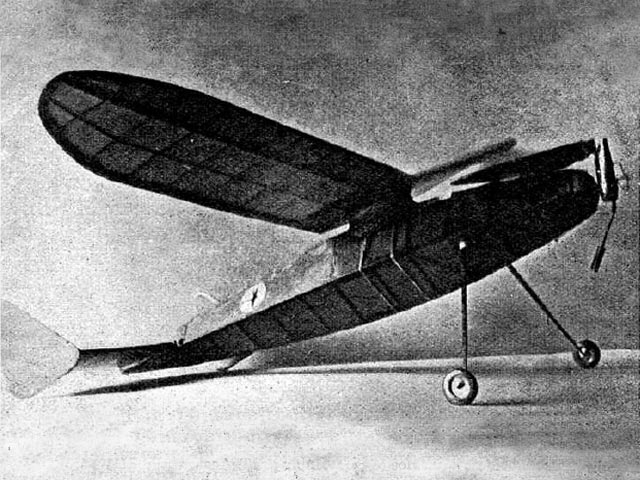