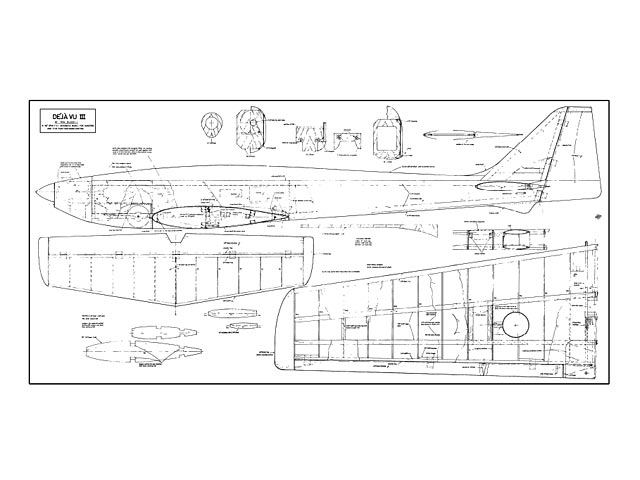 Quote: "THIS MODEL is not of particularly new concept in design or construction - hence the name - but it is my idea of what an aerobatic model should look like. The bonus, for me, was that, when completed, its performance turned out to be just my idea of what this type of model's performance should be, too!

It is loosely based on designs by the West German flier Neckar and our own Dennis Hammant, the model I am flying at the time of writing (well, not literally!) being the third in the series, the two previous machines having had foam wings. Mk III has a completely built-up structure, mainly for strength. (I will never be convinced that a foam wing is anything like as strong, especially if retracts are being used).

The models have all weighed around the 7-1/2 to 8 lb mark, which isn't really heavy by today's standards, but a good powerful engine is necessary. I use an HP.6x with a Kavan pressure injection carburettor. The Mk.I and Mk.II models used a standard HP. 61, and this was really adequate, but with the Kavan carb - wow!

My retract units are the Carl Goldberg type, and to power them I use the MK servo, which really needs no praise from me but I would, and do, recommend it to others. But you want to know about the model.

The wing - the heart of any model - is big and has a relatively thick symmetrical section. This means it is easier to maintain an even flying speed throughout the manoeurves. The sweep-back makes it easier to fly crosswind. The tail is also of a thick symmetrical type, and this combination gives the model the ability to be landed nose-up with the greatest of ease. Deja vu won't tip stall at low speeds but, with all that rudder, spins are no problem. The fuselage doesn't look particularly deep - until you measure it. It's more than enough for the rolling manoeuvres, anyway. The engine-wing-fuselage alignment is 0-0-0 but with 2° right-thrust on the engine.

What more can I say? This all sounds so good I shall be building some more myself - so why not give it a try?

CONSTRUCTION: These notes are just a general guide, so if you have your own particular way of doing things, then it is up to you. Use a foam
wing and tail unit if you must - but why not prove you can still build good strong wings the built-up way? It's worth it in the long run, I assure you. I will, however, go into some detail on the fitting of retract units, as this can be rather tricky.

Wings: First make all the ribs by the usual 'sandwich' method. The slight alteration in rib spacing, from R10 outwards need not be compensated for. Balance out the timber for lead-ing and trailing edges and spars, making sure that the timber for each wing panel weighs, in toto, the same. Then make the top front spars up into one full-length unit. Mark the rib positions on all pieces and mark centre lines on the leading and trailing edges. Also mark corresponding centre lines on all the ribs. This will ease the task of rib alignment considerably..." 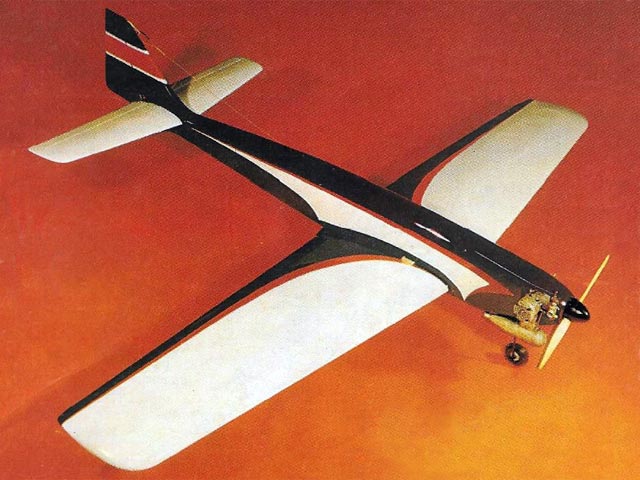 The original model as I designed it is slightly different from the plan. If you look at the photo with me in it you will notice that the fuselage profile is different. The high point in the fuselage of the original was farther forward than on the plan by some 4”-6”.
I never received any copies of the plan for inspection prior to publication. I did contact the magazine at the time but they weren’t interested in correcting things. Ah well, it was a long time ago now, wish I still had one.
Ron Russell - 09/04/2020
Love to get the rib profiles Ron.
John - 10/04/2020
I think the ribs are all just made as a sandwich, from the root and tip ribs shown on the plan.
SteveWMD - 10/04/2020
Add a comment