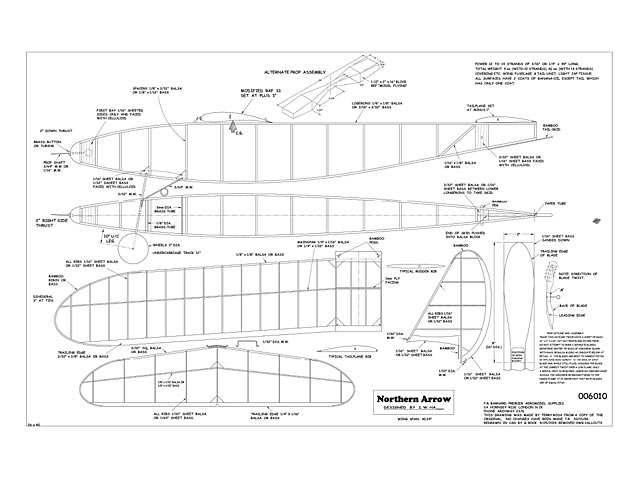 Quote: "FR Bernard Premier Aeromodel Supplies, 2A Hornsey Rise, London N19. This drawing was made by Terry Rose from a copy of the original. No changes were made TR 30.10.86. Redrawn in CAD by Gene Rock 9/25/2019. Removed swg callouts."

Note see supplement file for a copy of the raw scan that Gene drew this up from. I mention this here just because I think every so often it's worth noting what a sterling job Gene (and others) do here working on these incomplete, hard to read, scans of torn old plans. Steve.

Update 25/10/2019: Added (modern) article, by Ramon Alban, thanks to Pit who found this online at http://www.vintagemodelairplane.com/pages/Downloa...

Quote: "The Northern Arrow was designed in 1936 to compete in contemporary 4 oz Wakefield competitions by Mr IW Hall of Northern Heights Model Flying Club. It was not published at the time. The following year, the weight rule changed to 8 oz and the model was forgotten. Time moved on, war broke out and international competitions ceased.

However, F/F demand was still there. Premier Kits obtained details of the plane from Mr Hall and marketed a kit for sale in 1941, advertised freely in the model press. Problem was, the draughtsman (Mr J Calderbank) copied the wing chord incorrectly and made it 4.75 in instead of 5 in. The rib outline on the plan measured 5 in. People bought the kit and flew the plane. End of story, or so it seemed. Except, time moves on again. 40 years later, in the early '80's, Fred Chapman built a replica from the original negative blueprint.

Of course it was not a 'Wakefield' anymore, because the wing area was now approx 181 sq inches - too low to meet the rules of 190 to 210. Fred persisted and Mike Kemp then decreed, unilaterally, that it was a Wakefield and could be flown in Sam35 competitions. Rules were amended accordingly. His reasoning? There were so few British wakes of the era we could not afford to lose one. And why not? Bravo! After all, Mike was the centre of the known universe for British rubber flyers and what he said was Gospel.

In the meantime I built the red one seen here and still alive today but with black fuselage..." 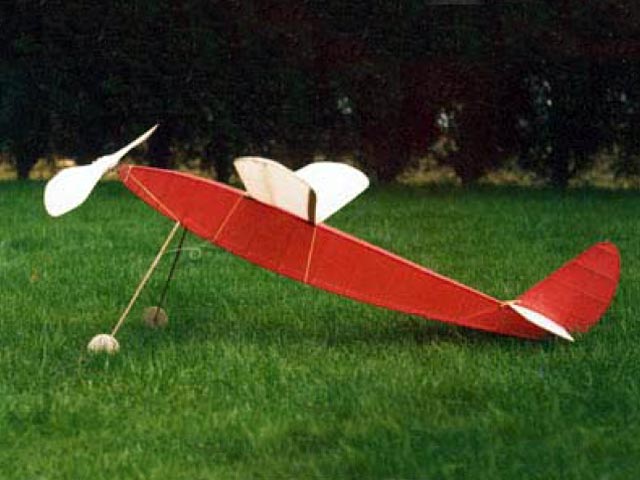