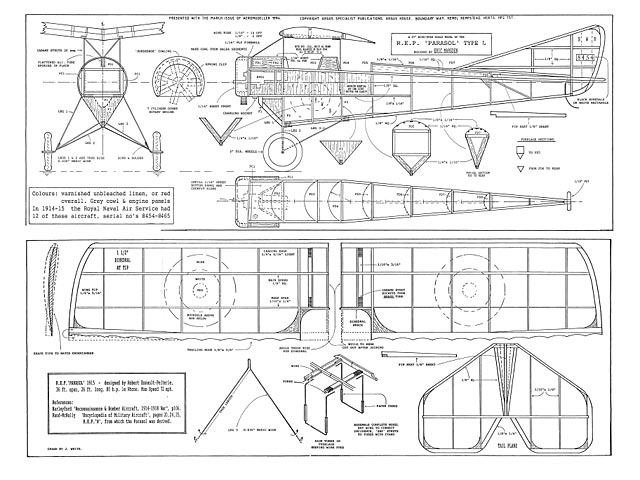 REP aircraft were designed and built by Robert Esnault-Pelterie, one of the leading French aviation pioneers before WWI. He is credited with the invention of the joystick. A trademark of his company was an all-red finish, even into 1915 when, perhaps, it began to cause some embarrassment to the airmen using his machines. Two of his types were in service to 1915, the mid-wing 80hp Gnome two-seater Type N, with the Armee de l'Air, and the Parasol 80hp le Rhone powered two-seater Type L. Both types were used for reconnaissance work - as were all aircraft then. The Harleyford book 'Bomber & Reconnaissance Aircraft of the 1914-18 War' gives one page to this marque, and has two pictures of each type, with a short account of each. It credits the Parasol with one machine gun as armament, and the Type 'N' cryptically as being armed with 'SA', presumably 'Small arms' - pistols, rifle, carbine?

The REP's are described as having 'good lifting capacity', but typically of the time, were slow - top speed 72 mph. The RNAS bought twelve Parasols. Whether they too were all red is not stated, but the pictures in both Harleyford and Putnam 'British Naval Aircraft' show the fuselage roundals on light coloured panels below the cockpits, against darker fuselages. Lacking definite information, my model was finished in an 'antique yellow' tissue to look like the varnished unbleached linen or cotton typical of the period.

Lateral control on the REP's was by wing warping, with the usual complex fan of cables above and below the wings. The upper cables were carried over a pylon of tandem struts, strut braced across the top. Judging that this mess of wires would be invisible in flight, and become a death trap for the model when it flew into a tree, I chose to 'include them out'.

If you compare the photographs of the model with the drawing you will see that the fuselage is much too wide. This is because I began to build a Type N from a thirty year old American magazine, and had the fuselage and tailplane built before I did any research. When I did, it was obvious the tailplane planform was incorrect, and the fuselage looked far too wide.

The diameter of the engines used on these kites, I found was around 36 in, giving, with clearance, around 40 in diameter for the cowling, which still gave ample width for the cockpits. In scale terms, the drawing in the magazine showed a cockpit nearly 48 in wide, which seemed a little improbable. I re-drew the fuselage and tailplane, and at the same time drew the model as the Parasol Type U. Having got so far with the fuselage, I decided to carry on with it, despite the excess width, on the grounds that if it flew well enough, the correct width model would probably fly better.

Construction: The fuselage is built by first making the partial side frames, and with the aid of dummy card formers, erecting them over the plan and pulling the upper longerons into a non-banana curve to the sternpost. Frame up the rectangular portion of the fuselage, with the main undercarriage legs bound to the appropriate cross-member, before adding the triangular frames and keel longeron, with the other undercarriage legs already bound into place. The remaining fuselage struts can now be fitted.

Make the cabane struts, adding the tightly rolled paper tubes before forming the top bends, and glue the paper tubes into the corners of the cockpits, without fixing the struts, at a height which will allow a small vertical movement when setting the wing incidence. This should be done when the wing is complete, and can be offered up and set into place correctly. An accurate way of doing this is to make card jigs to set between fuselage and centre section leading edge, and similarly to the trailing edge. A drop of cyano at the top of each paper tube will fix things nicely.

Now add the upper formers and soft 1/16 sheeting, with the stringers aft from the cockpit, Make the cowling from segments of soft balsa, a little oversize. The front bulkhead is cut from 1/16 ply, with small pieces, 3/16/2 x 3/8 ply, added as doublers where the motor mount screws fit. Mark off the screw holes, and drill to the tapping size for the 2mm screws provided. I found that the second smallest of the cheap instrument maker's screwdrivers, sold in plastic packets on markets, etc., gives the right size hole, so it is now filed to a diamond drill point for this purpose.

A tap for cutting 2mm threads in ply or plastic is easily made either from a 2mm screw, or better still, one of those R/C control rod ends. File a portion of the thread down to a slow taper from crest to root, making a triangular cross section. Add a handle made from brass tube or piano wire. The tap made from a cheese-head screw can be used with a screwdriver to cut the threads, but it's a bit tricky to avoid an oversize thread if it is allowed to wobble.

When the holes are tapped - not quite through - run a drop of cyano in to harden the thread, and leave to cure. When the motor is mounted, later, the screws will cut the last portion of thread by compressing the ply to make a firm fit.

Glue the bulkhead onto the fuselage, add the cowl with two or three glue 'tacks' only, and sand all to finish. Then detach the cowl, sand the interior to about 1/8 in final thickness, and re-glue into place. Clean, tin, and bind and solder the undercarriage legs together to give the correct geometry, and install the wheels with locating washers at either side.

Tailplane and fin are straightforward, and may be covered before the fin is glued onto its mount. Be particularly careful in making square cuts for the ends of the struts in these components. Slightly off-square cuts may not be obvious when first built, but over a long period, white glue, which never sets to a solid, and doped tissue which continues to pull, allow these glue filled joints to pull closed, creating the warps from which our models suffer. Another case for the old adage - Measure twice, cut once!

Covering and finishing: Cover, watershrink, and dope - 3 or 4 coats of 50/ 50 dope/thinners, and add roundals, and fuselage trim of black and grey. The roundals and rudder stripes are easily made from lightweight coloured tissue, but white tissue does not show up well. To improve it, paint over a piece of white tissue with white gouache before cutting the needed bits. The serial number panels for the rudder are made in the same way, with the numbers impressed from Letraset or a similar source. For the roundals cut the white ring slightly oversize inside and out, and fix these first, laying in place and flooding with thinners from a soft brush. Then add the blue outer and red inners. Black felt pen works well to indicate elevator and rudder hinge lines, serial panel outline, footholes, etc.

Fit the wing by sliding the front ethane ends into the mounting tubes, and spring the rear strut ends into place.

An adjustable mount for the KP01: The original model balances near the wing mainspar without ballast, but the more accurate one drawn here may need a smidgen of clay ballast in the lighter nose. With around 2-1/2 degrees of right and down thrust start your trimming flights. To make thrustline adjustment easier I mount the KP01 unit on short pieces of small diameter silicone fuel tubing, which squash to form cushion mounts, and make adjustments easy. Beware of the mount adjacent to the drive pinion, if you use this method - make sure that in squashing it does not foul the rotating armature, and cost you power. Always check the unit for freedom of spin by giving a flick to the prop after mounting, to see that the motor spins fairly freely.

A dummy motor can be made from paper tube cylinders mounted on a crankcase cut from the cap of one of those pump type toothpaste containers. If you find a thickish one, sand it down to reduce weight before cutting out the holes for the cylinders and parting off the excess length. To hold the dummy in place make light springs from 22 swg wire, and fix them to opposing cylinders, so that the engine will 'spring' into place and be held over the output gears. Mine weighed 9 grams - because I didn't lighten the crankcase piece. Since an extra 9 grams does nothing to improve the flyability of models of this size and power, my dummy engine is only fitted for the camera.

After two years of fairly 'chuck about' flying, the cabane struts on my model began to get a bit cobbley - one had fractured and been repaired by sleeving - all the result of having to use some of the inferior 'piano wire' which is all that is available in most model shops - no trade name no pack drill - so it's worthwhile to demand real springy wire, and not the soft stuff. If you get the same problem, you can do as I did, and cut the struts out, and convert the model to the Type N midwinger." 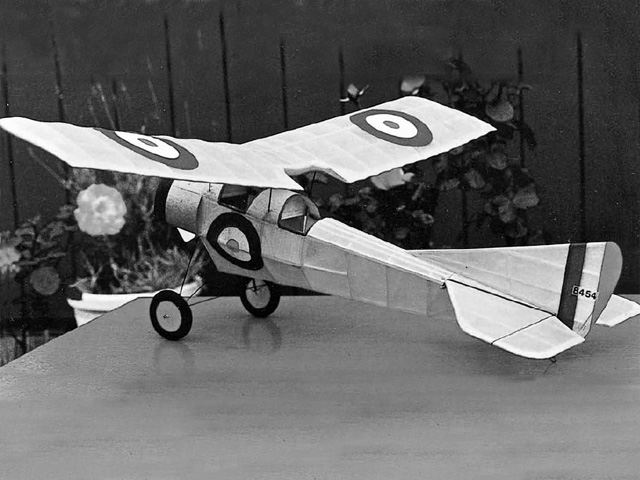