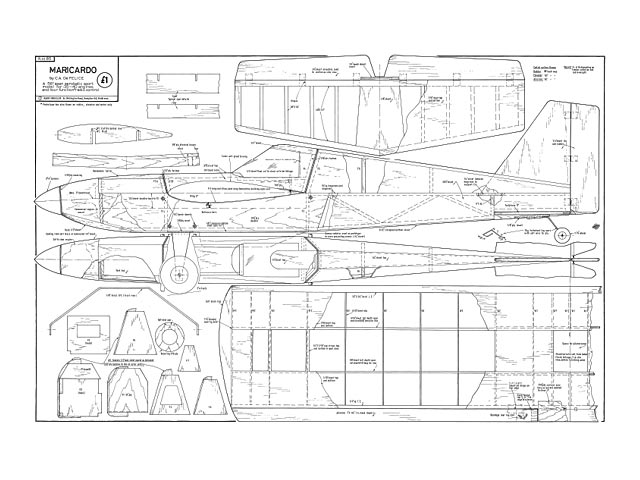 AFTER spending many months looking around for a shoulder-wing model that didn't look like a box with a wing stuck on top, I had to conclude that there are few available, and none had the 'full-size' appearance that I was seeking, so I just had to sit down and design one for myself.

My first consideration, therefore, when designing Maricardo, was an attractive appearance. Looks are a matter of individual taste, and my own preference has always been towards the miniature 'pylon racer' type model. However, my flying ability being, at best, somewhat average and pylon racers being, at best, somewhat hairy, I've always steered clear of these machines. As my needs on the flying side were quite different from this type of model (I wanted an easy-to-fly model, capable of sports type aerobatics), and not having to conform to limiting specifications, I felt that I could cheat all round and still come up with a model that looked the part.

Pylon racers are designed to have a very high turn of speed and, to this end, have a very thin wing of minimum area resulting in a high wing loading combined with neutral stability. My task was simple, I wanted exactly the opposite! The fairly thick semi-symmetrical wing section and a generous 600 sq in wing area, took care of any ideas Maricardo might have had towards breaking the 'ton', and with an estimated all-up weight of between 5-1/2 to 6 lbs, a reasonable wing loading was ensured. Modest dihedral and a shoulder to mid-wing layout gave me a certain amount of built-in stability (I like to relax when I fly). The low mounted tailplane keeps clear of any wing turbulance, and besides we're told by those who know about these things - or tell us they do - that the location of the CG is less critical with a low mounted tailplane.

So far, so good. On paper, at least, I had an attractive model, with a fair amount of inbuilt stability, a non critical CG location, and a reasonable wing loading.

However, one's equipment (in my case, Flight Link 5 series II), can also influence the final shape, the most obvious example of this being the dummy air scoop. The mid-wing position employed left insufficient clearance above the servos for the aileron linkage, and the only solution was to lower them through the fuselage bottom and cover the protruding ends with a dummy scoop. (This is shown dotted on the plan, with aileron horns above the wing, for other types of equipment.)

Another alteration also shown on the final drawing) necessitated by installation difficulties, was to the forward fuselage outline. This tapers from the undercarriage position up to the spinrmer. However, on the prototypes, I delayed the taper thus enabling me to install the receiver between F1 and F2. The reason for this was that I tend to build tail-heavy and my receiver is
fairly bulky. To install it in the more usual position behind F2, would have meant installing it flat and moving the servo tray aft. Owners of Flight Link Series III-IV and other mini outfits won't have this latter problem, and should build as per plan. They may, if they wish, also dispense with the dummy air-scoop, but personally I like this item, as it helps give a different look to the model and, let's face it, that's what own designs are all about.

CONSTRUCTION I've enjoyed giving you the back-ground of Maricardo, but telling you how to build it I wouldn't enjoy as much, so my building notes will take the form of..." 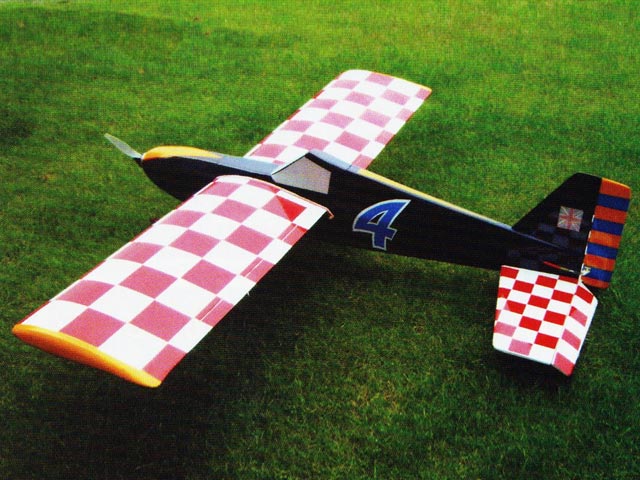 Many years ago built this from a kit supplied by Marionville Models, Edinburgh. Good kit, great model. Subsequently built an number of modified versions, with a low mounted wing, as I found that when one crashed it did a lot of damage to the fuselage, but with the low wing the wing came free and did less damage. Even build a bigger version with a 60 Irving fitted.
Andy Greig - 26/02/2021
I’m just about to start a Maricardo from a set of plans I ordered a few years ago. I remember my Dad built the low wing version kit from Marionville many years ago; it was called the Coyote and was a fantastic looking model.
Tim - 04/03/2022
I have some plans that I created for a Low wing version.
Andy greig - 24/03/2022
Can you scan and send them in?
SteveWMD - 24/03/2022
Add a comment