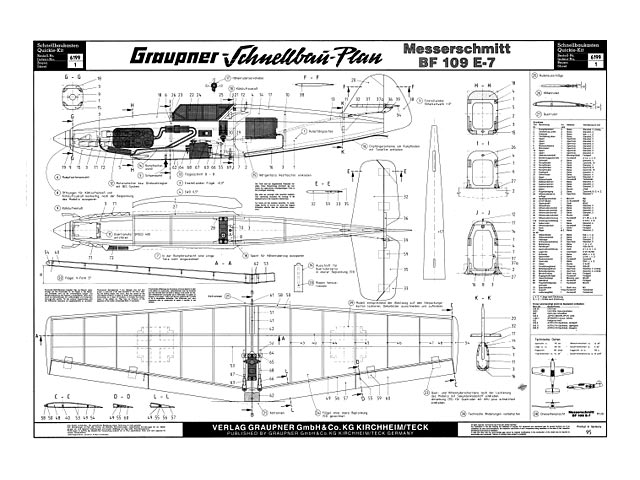 Quote: "Hello Outerzone, here is the plan for the GRAUPNER Me109-E7. Wingspan is 700mm. I bought it sometime in the nineties and built but never flew it. It was meant for Speed400 on 8 small cells, a lot of weight for not very much power. It's still laying around in the shop, some day I'll put in a light but powerful LiPo combi, I guess. B/R Hubert"

Quote: "Kit Review: A review by one of Germany's keenest scale electric fliers, of the buildingh and flying of Graupner's kit model of one of history's most famous aircraft. Messerschmitt Bf109E-7, by Franz Stickinger.

The Kit: In February 1995 Graupner introduced their little Me 109 at the Nuremberg Toy Fair. (Messerschmitt Bf 109 E-7 kit, part No: 6199). It only took less than half a year and the kit was in stock at my local hobbyshop.

For the retail price of 89DM, you get a quickie kit with illustrated building instructions, die-cut balsa and plywood parts, machined leading and trailing edges, spruce spars, sheeting material, vacuum moulded parts and a hardware pack. A close examination revealed that the fuselage side sheets were from extremely hard wood, and one set of ribs was die-crushed.

Meanwhile I had to provide two more kits for friends and I had the chance to sort out the kits. At least I found one kit with comparatively light fuselage sides and the ribs OK. As I had a look at the uncovered fuselage of a friend's Me 109, I was warned in advance, to make some alterations to the kit in order to gain a reasonable all-up-weight.

Assembly and Finish: The photos on these pages show the stages of assembly. Using mostly superglue, it is only a matter of approximately 20 hours. The Me 109's construction is very similar to the Mini Viper's - no wonder, both are designed by Werner Dettweiler.

The fuselage side sheets and the 6mm sheet for fuselage top rear decking were substituted with balsa of a lighter grade. Instead of the spruce spars 3mm hard balsa was used. This saved me only 5g. In addition the fuselage top and bottom blocks were hollowed out. Believe it or not, all the alterations can add up to 50g which is almost 10% of the total weight.

All ribs were sanded carefully before assembly and could be used. False TE spars were causing trouble, because they were too short. All other balsa parts were of good quality, especially the wing skin panels were very light. Bottom and upper wing sheeting were glued with viscous superglue. Begin by fixing the upper wing panel at the TE and then bend it down to the LE. Do this on a flat board and you can be sure to not build in any warps.

Seal the wings with at least two coats of dope, otherwise you will have 'corrugated iron' wings when applying tissue with paste.

The instructions tell you to use differential up and down throw of the ailerons, but doesn't give details. So it's up to you to rack your brains. The elevator was linked with 0.8mm piano wire, which runs in the white inner tube, to the servo. The hinges proved very practical; just put them into the slots, slide the parts together and then let the superglue soak into the slots. In the end the whole model was airbrushed with Humbrol enamels in the desert camouflage of I/JG 27. This is the particular airplane of Werner Schrier, a Me 109 E-4N/Trop. The crossbars are used as supplied in the kit, but they are not exactly scale.

Out to the field for flying: Due to the thin MH 32 airfoil and the tiny model, together with a total weight of 550g, I was expecting a racy performance similar to a Speed 400 Pylon racer. After having successfully flown several Speed 400 semi-scale models (Corsair, Sea Fury, Spitfire, Fw 190, He 219) I also wanted to try a hand launch. I would have liked a little breeze to help me get the model launched, but it was very calm that day. Nevertheless I risked the first attempt and promptly had to belly land the Messerschmitt.

The second attempt was successful with a 6 x 4 prop. CG and rudder throws can be taken from the plan. The Me 109 was fast and agile, but the motor fixing screws worked loose in flight and forced me to land. Tip: Soak motor bulkhead with superglue and use washers. Fix the screws with Loctite.

Third attempt: stalled the model and dived over left into a path. The result was a bent shaft, broken prop and some damage to the wing. The aileron torque rod was pulled out of the wing skin. The motor shaft could only have bent because the motor bulkhead (No.19) is too soft. Reinforce it with thin plywood. Back to the hobbyroom, try it another day. All that trouble with hand launching made me decide to put a hook into the wing, right behind the dowel and launch it by bungee. This method I had already tested with my 'BENETTONI' flying wing and it works perfectly. Be sure that your model is trimmed correctly before attempting a bungee launch. Since then, no more hair raising launches have occurred; it needs that fast acceleration.

The CAM Prop matches perfectly, makes the model fast in upward figures and doesn't break during landings. Flight time is approximately four and a half minutes, using a switch and 700AR cells.

Summary/Conclusion: Graupner's Me 109 is a reasonable, little agile model with a certain scale touch. It is rather a stealth Pylon Racer than a model intended for relaxed scale-like flying. For launching it, an experienced helper or a bungee is required. The pilot also needs to have experience with fast aileron/elevator models.

You can save quite a bit of weight, if you build carefully. With 7 x 500AR cells you could end up with an all-up-weight of 500g. This would be a good set-up for a maiden flight. Graupner suggests the 7.2V motor and 10 x 500AR cells, but I didn't try this because I feared the high wing loading." 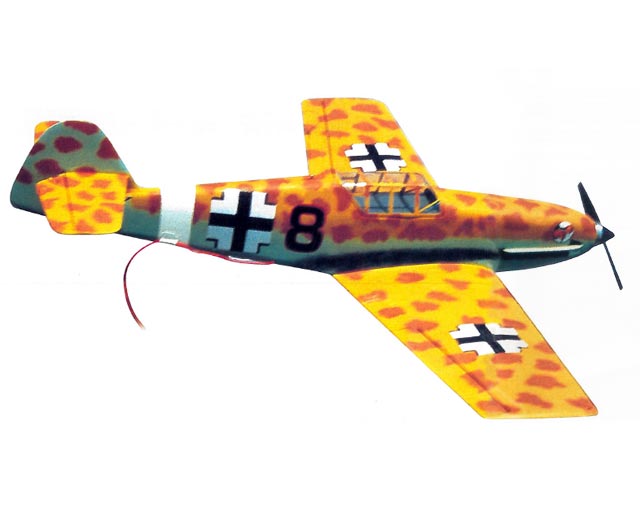