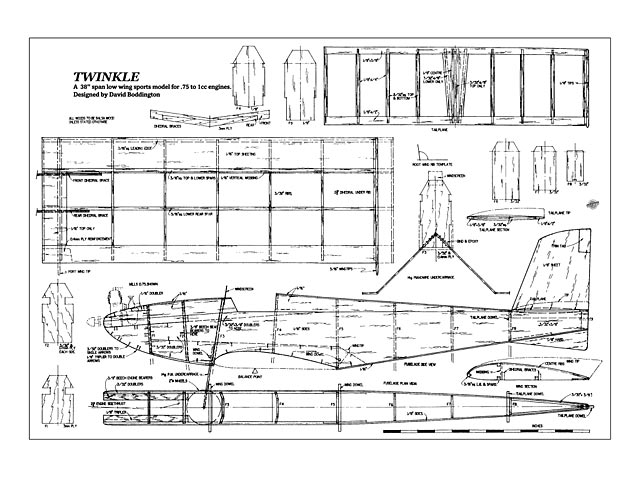 Quote: "There's life in the old dog yet. Twinkle, by David Boddington.

You must remember that you are not as young as you were. What a fatuous statement - of course I am not as young as I was, but I don't need to be reminded of the fact - a glance in the mirror is all that is needed! So when a well-meaning lady uttered these words, just because I was striding out on a walk, it got me thinking. How 'not as young' am I? Has it all gone to pot, or is there still hope? Only one way to find out - put my efforts to the test and, as aeromodelling is my main activity, it would have to relate to this hobby.

For a while I had been thinking about designing a low-wing free flight model, something I had never attempted, as this genre was considered to be very difficult to trim and not possessing the nicest of flight manners. As my CS Boddo Mills .75 diesels were just arriving, I decided to size the model for the power and one Wednesday afternoon and evening saw the design drawn. It was the following morning that the fatal sentence was uttered and I was stirred into action - a couple of prints were obtained from the local copy shop after lunch, the building board was cleared - with a sweep of the arm - and construction of the 'Twinkle' commenced.

I do like to cut all the parts out first and having a second print of the drawing allows me to cut out the formers, fuselage sides, ribs etc and glue them to the wood with Spray Mount: this allows the easy removal of the paper patterns. For the prototype model I usually only draw one wing half and when the second print is made, this is a reversed so I have left and right hand wing panels.

Quick build tips: As far as possible I wanted to use white PVA glue for the construction as it gives a strong joint, penetrates the wood fibres and does not tend to warp the structures. The down side is that it is relatively slow-drying and as I was attempting to buck the 'old and slow' signs, I had to plan the assembly carefully to give the structures as long as possible in a pinned-down, or clamped state. This aim was achieved to the extent that the only other glues used were epoxy - for the binding to the undercarriage joint to the fuselage former - and cyano, to glue the fin in position.

I thought could cheat in one respect, by using some die-cut wing ribs from an old (read 'very old') Tyro kit, but when I looked there were only a few of them. A change of mind resulted in the original wing and tail plane tips being discarded and the more conventional triangular sections used. By bedtime, the wing panels were assembled, albeit without the leading edge sheeting, the fuselage formers were glued to one side and the engine bearers were in position.

Friday morning - not too early - saw the tailplane being assembled over the plan, the wing panel leading edge sheets glued to the structures, still pinned to the building board and the vertical webbing added. The opposite fuselage side was glued to the formers, being careful to line up the tail posts and to get an equal curvature of the two sides. Throughout the remainder of the day the structure was completed - again, not rushing the glue drying of the wing panels when joining them, fitting the fuselage underside and top coaming sheeting and finally carrying out the shaping and sanding. Time, before settling down to a well-earned whisky and water, to put a couple of coats of sanding sealer to the engine bay and cockpit area.

Covering/finishing: Saturday morning up bright and early (only joking!) a quick spray of paint to the engine and open areas and then on to the film covering; a chance to use the 'World Models Lightex', sold by Steve Webb Models. This lightweight film is extremely opaque, good adhesive qualities and shrinks to a high degree of taughtness, it takes a bit of experimenting to remove the backing film..." 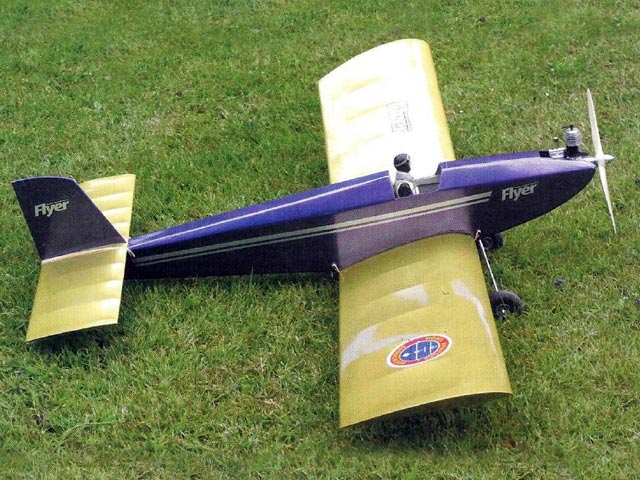