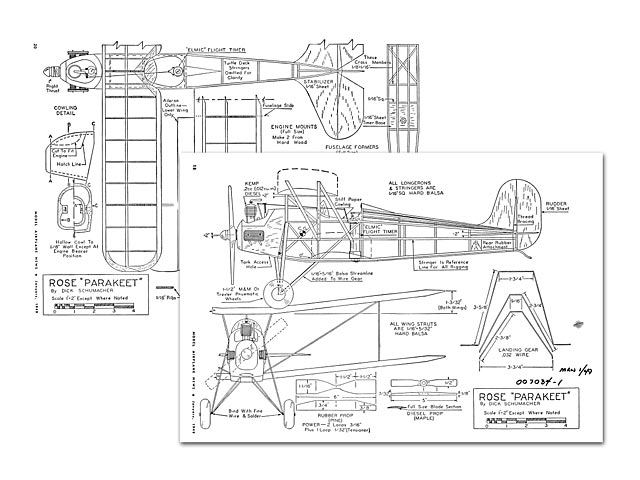 Note the plan and article as printed in MAN 1949 used the unusual spelling of 'Rose Parakeet' throughout, rather than the conventional 'Rose Parrakeet'.

Quote: "Model Parakeet, by Dick Schumacher. Usable with rubber, CO2 or diesel power, this attractive model should interest all builders.

WHAT modeler hasn't completed a little flying scale job and sat back to daydream about the possibilities of having an internal combustion engine small enough to power it? Our tiny Parakeet was first completed as a rubber powered flying scale, and the fulfillment of the dream was the result of exchanging info with Mick Farthing, one of England's outstanding 'ight weight' experts.

Through Mick I learned that a truly little diesel was being produced commercially in England. The motor is a K Hawk and has a displacement of only 012 cu in; as a comparison, it has less than 3/4 the displacement of the popular OK CO2! Its weight of 1 oz makes it one of the smallest and lightest commercially produced internal combustion engines in the world. What's more, this weight includes the tank and a built in cut-off.

As soon as I got this news there was no rest until an exchange was arranged and I obtained one. When the little jewel arrived it met with my highest hopes for workmanship. Would it start and run reliably? Yes! Despite the mental hazard of expecting an engine so small to be very erratic and tricky, once the characteristics of diesel operation were understood and 'felt', it started with remarkable ease and turned the 5 inch prop at a smart 8,000 rpm.

Shortly after the engine arrived I received a couple of Elmic flight timers from England, also courtesy of Mick. These sensational timers weigh only 3 oz which gave me a practical timer for that built in cut-off on the Hawk. As a sidelight, the Elmic is the simplest to adjust and has the greatest accuracy, even at ten minutes, of any air timer I've seen. It is blessed with a very strong snap action of about 1/4 in which, coupled with its small size, makes it an ideal dethermalizer for even the lightest rubber model as well as a good engine cut-off for a power ship.

As for the original Rose Parakeet, it was as tiny in proportion to its big sisters as the Hawk is in the engine field. Its 20 ft span and 16 ft 4 in length overall made it one of the smallest ships in the United States to receive the coveted NC designation. Powered by the famous Continental A-40-3 engine it stepped along at 100 mph in high and 85 mph in cruise. The climb was rated at 750 ft per minute. The little ship was so small that the first impression on seeing it was, 'Whose model is that'; and when the pilot climbed out he would tower over the top wing.

To get back to the model of the Parakeet, the ship came to 2.75 oz with a powerplant totaling 1.3 oz and some balancing lead in the tail.

The smallest engine in the smallest airplane makes an intriguing project, especially when the lines are as pleasing as those on the Parakeet and the Hawk, so let's get to work on the construction. Plans can easily be enlarged from the scale and dimensions indicated on drawings. If you don't have the facilities, take the magazine to your local blueprint and photostatic shop and have the job done.

FUSELAGE: It is constructed around a basic structure of 1/16 sq hard balsa. Sides are made first in the usual manner, by pinning the longerons in place over the plans; be sure not to pin through the longerons. Cut all the uprights for both sides at the same time, and as you progress put a spot of glue at each end of each upright and set it aside..." 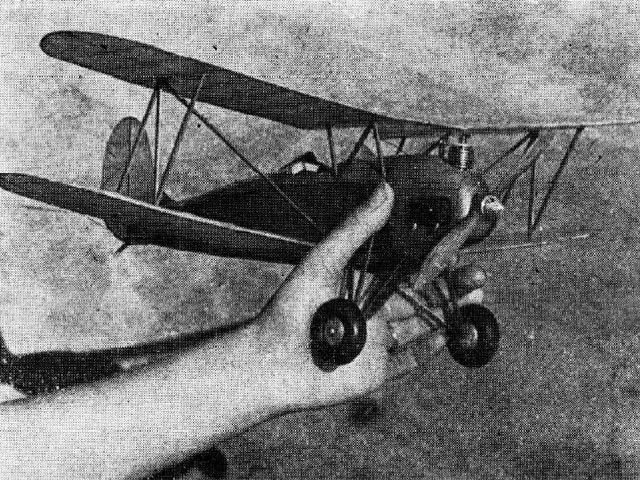