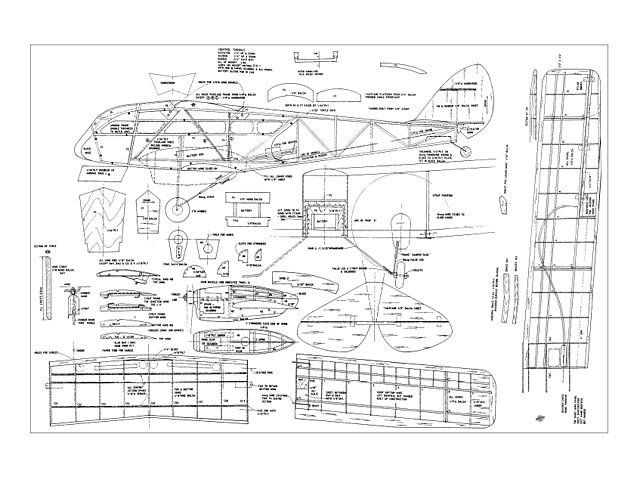 Some time ago I built a 33 inch free flight Mercury Tiger Moth (oz351), fitted a speed 400 motor and MFA mini Olympus gearbox, 9g servos, Hitec Feather Rx, finished it in yellow and silver leftovers of Solarfilm and was amazed at how well it flew. The TIGGIE has flown and flown and flown. The free flight heritage built in to this model really shows (they don't make 'em like that any more!). I have flown the Tiggie at lots of electric fly-ins and won a number of prizes for its ability to fly in all sorts of conditions - and it looks ace! Every time I looked at the Tiggie, I could not help but wonder if a de Havilland OH 84 Dragon would work using some of the same design features - it does!

I had done some calculations on wing area and weight etc, and the DH 84 idea sat in the back of my mind as other commitments intruded, then whilst on holiday near Edinburgh we noticed the Museum of Flight at East Fortune and there, amongst its other treasures was a DH 84.

Needless to say, this was enough to reawaken the sleeping dragon! I decided on 48 in span as a convenient size and as two speed 400/mini Olympus gearboxes were on the shelf, things moved on. I did think that some smaller motors and batteries could be better, but I had the motors anyway, so an executive decision was made!

I had drawings of a DH 84, but at 98 in wingspan, it was too big for my workshop and pocket! The smaller version came together with the Tiggie at arms reach for reference and inspiration. The construction details of the big version were not of much help, but with much head scratching, a final design was drawn up using only the outlines from the big one.

The method of securing the wing struts is copied from the Mercury kit and, whilst being a little fiddly to set up, provides a very neat and secure fixing. Some scale buffs out there will notice the wing planform has been simplified, but this made things far easier for the build, and is hardly noticeable on the completed model.

So there you have it - a twin-engined version of the Tiger Moth!

START BUILDING: The fuselage is built around 1/8 square longerons, uprights and cross pieces, faced with 1/64 ply doublers at the front end. I build on a piece of plasterboard as it is cheap, takes pins and can be discarded after use. Don't forget to build handed sides - one on top of the other to ensure they're identical (use clear polythene between plan and sides to prevent everything sticking together). You will notice that on the prototype I didn't include the cockpit side frames - a mistake! It would be far easier to make them integral.

Cut out F3 from 1/8 ply and after drilling holes (2mm dia), sew the wire u/c to F3 using good strong thread and then flood with cyano to bond everything together. F5 is cut from 1/16 sheet - it is removed after fuz is complete, but needs to be accurately fitted together with F3 as the basic foundation of the fuselage. Glue F3 and F5, together with F4 and F4a, to the sides, taking some time to ensure everything is nice and square - the tail ends must line up without having to twist them. These formers carry the battery box/chute, which should be made next from 3/32 balsa with no top. Build it round the battery you are going to use - 8 x 2000 mAh in my case - then trim F3, F4 and F4a until its a good fit and glue it in place. Pull tail ends of fuz together and glue (check for square). Then fit F1 (be careful not to snap sides!), followed by F2.

Make up soft balsa block for nose (make up with 1/64 ply profile glued down centerline - when you get to the ply, you have the right shape) carve to side profile first then from top, finishing with the sloping facets - this nose shape is very distinctive so needs to be 100% accurate. Then complete the cabin roof and windscreen frame. Finish all diagonal bracing to rear of fuz, fit curved turtle deck formers on top rear and finish with 1/32 balsa skin. Fit F6 and F7 to the angle shown on the plan, then the turtledeck formers at the front and rear, followed by 1/32 sheet as per plan.

Tailplane and fin are from 1/8 balsa. Build the platform for tailplane, making sure the incidence angle is correct, as this affects flight performance. You can now temporarily glue the fin and tailplane in place and admire those lovely, graceful de Havilland shapes!

LOWER CENTER SECTION Start with the lower wing centre section and make up top and bottom wing skins from 1/16 med balsa, marked with the position of ribs and spars. Wing ribs are all produced the same way using the sandwich method (different ribs for top and bottom wings and lower centre section). Whilst the ribs are as a block, you would normally need to cut the slots for the wing spars..." 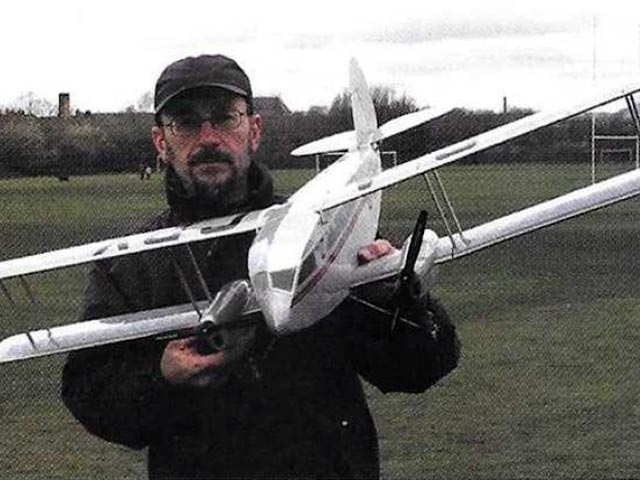 What a beautiful model, my Playmate of the Month nomination for sure!
Miguel - 21/10/2019
Add a comment