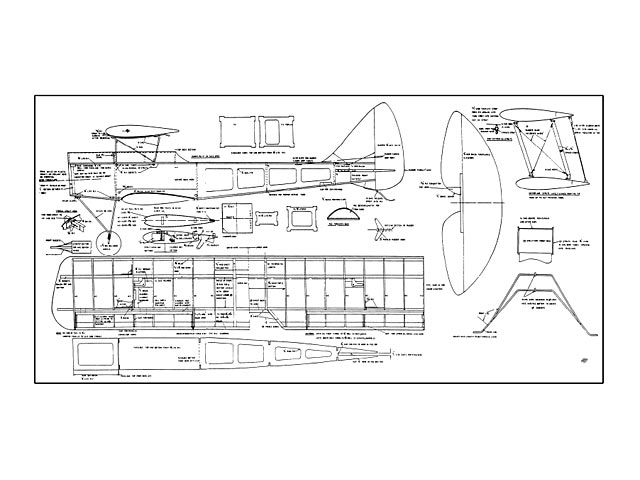 Quote: "One for the fun flyer! Box Moff, by Dereck Woodward.

The Biplane - for any lover of flight, is surely the most evocative of all flying machines. From the hesitant first flights of the Wrights to the howl of a big Lycoming Pitts twisting across the sky, biplanes are a part of aviation history. Throughout most of that time fly the Moths Gypsy and Cirrus Moths, elegant Hornet and Fox Moths, ageless Tiger Moths and the engaging, aerobatic Box Moff.

The what Moff? No - Box Moff, very rare indeed. So rare that the real one never existed, but the model is all fun and coupled to a 40 four-stroke, she's a cute little thing to take for a flight of fancy on nice days. Add to that, she's cheap to build, doesn't take up half the house and is good-natured.

So for a humorous trip into the era of real airplanes with two wings and a big fan, let's go make a little balsa dust.

Those wing things: Sorry folks, if you want nostalgia, you just have to cut out wing ribs! I try to do them first, a lot of guys use the sandwich method with two ply templates but I go for the cof-fee method. This needs only one ply template which you cut around with a knife. With the parallel chord all the ribs are basically the same shape, with odd holes and trimming as required. Where does the coffee come in? When I get bored I go make one and drink it while reading back numbers of R.C. Model World.

Worried about the centre spars? On a wing rib two centre spars take eight cuts, two spars top and two bottom take twelve cuts — centre spars also need no webbing, hence centre spars are quicker. Slip the ribs over the spars so each rib is about Vain. from it's correct position. Now run P.V.A. glue around the spars at the rib position, then slide ribs into position over the glue.

Rest the spars over the plan on scrap pieces of 1/4in., correctly align ribs, weight down and leave to set. If it was not quick and easy, I certainly would not use it. Note the length of the spars by a strange coin-cidence it is the same as a sheet of balsa. One meadium hard sheet of Vain. balsa and a little careful stripping and there's your spars.

Trailing edge look a little different? A hacksaw cut in each rib end, glue in the 3/4 x 1/32 in balsa top and bottom, a little light sanding and it's done. Very resistant to bench rash, car door bites, etc. Of course, you may prefer to carve and sand most of a sheet of 1/2 in balsa onto the floor.

For the ailerons I make up the sub spar and aileron leading edge slot them up for hinges, cut out the ribs at the appropriate stations and install the spar/aileron leading edge as a pair. They are then shaped in situ before cutting the aileron free from the wing structure. This should ensure that they match up later. All four ailerons are identical.

When you fit the aileron cranks in the bottom wing, sketch your hardware in on the plan, make sure there are no snags being built in as you proceed.

The cut out in the top wing centre section is really for effect, just cut out the trailing edge and edge the cut out with 1/4in. balsa. Both wing centre bays are sheeted up as shown, don't forget the scrap build up off the spars to rib height under the sheeting. Add the ply spare and rib reinforcement for the strut, epoxy in the wire hooks then add the balsa gussets to fair up to rib level..." 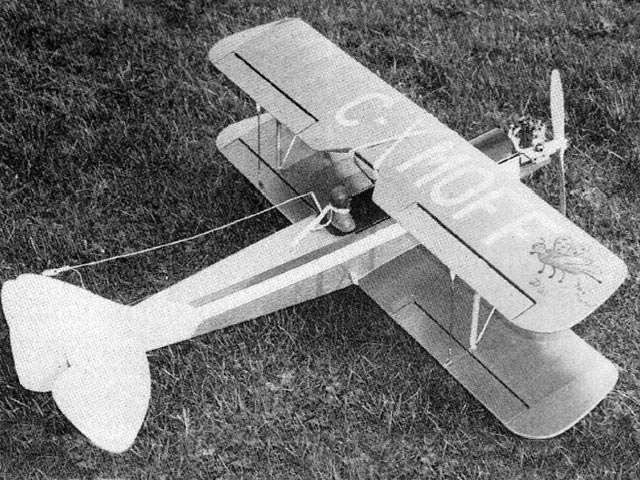