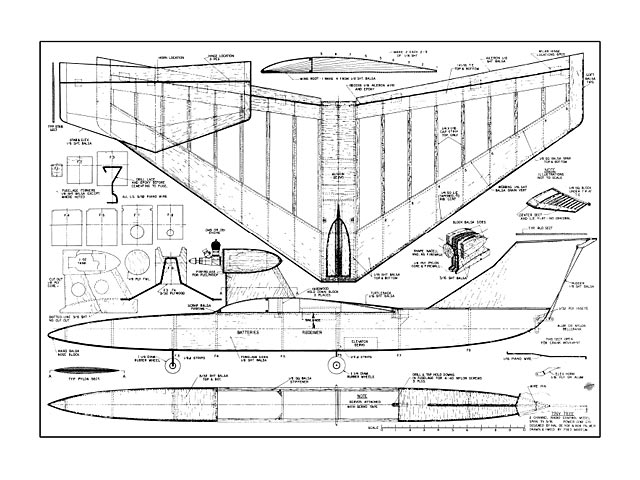 Quote: "TINY TEE, by BOB PALMER and HAL DEYOE. Long time design development from free flight up through R/C with varying engine displacements guarantee what the authors call it 'a sweet flying bird'. Designed for fun and Sunday flying it still can be the training machine for stunt.

One of the most refreshing sights to see is a person experimenting with new designs in model aircraft. Persons from the old school of model builders like to design and build something different. It is a greater challenge not knowing what to expect on the first flight; then, when everything works out as expected with only a minor thrust adjustment, one is very pleased with himself.

This little model was designed with simplicity in mind. Something the younger generation and the beginning modeler would enjoy building. The 'Tiny T' (as we call her) is very easy and simple to build with minimum expense. The Tiny T has a 34 in wing span with a 38 in fuselage. It has a 13 in chord with a 37° sweep. She was designed seven years ago as a free flight but slightly smaller for an 020, and was flown for about a year before being lost in a thermal.

On one of our Lockheed field trips to Langley Field we were discussing the possibilities of making an airplane that would utilize the new light weight pro-portional equipment that is available now. This was when Tiny T was re-born and was built on weekends. When we returned to California we installed a 4 RS 'Digi-mite' using aileron and elevator as the two main controls.

The proto-model was first flown without a landing gear and with an 049 Cox Golden Bee. It flew very well with this engine as long as it was used for sport flying. We decided Tiny T should have an .051 and .09 arrangement for more advanced flying. The pod was redesigned and made of fiberglass so it could be used as a fuel tank. Now it can carry enough fuel for both engine sizes. We also installed a landing gear for take-offs and smooth landings.

TEST FLYING 'TINY T': After launching the first model we had a torque problem which was solved by a longer tail. When this was done and when a little right thrust in the engine was added the plane flew very well. It was very stable in the air and handled excellently.

The model, being equipped with strip ailerons, can be banked very sharply and can be rolled easily. The first try at rolling four rolls was accomplished with very little loss of altitude. It rolled on its axis with no elevator being necessary. Rolls were fast, but rolling once and stopping upright was also accom-plished several times. So cuban eights and immelmanns are right up its alley.

Take-offs were no trouble at all although we recommend a smooth runway as there is no, way to steer it and small obstructions will change its course. It's a little jewel to fly and it was a pleasure developing a design into a performing R/C model. You'll find it worth your while to build and fly it.

CONSTRUCTION: Fuselage. The fuselage sides are constructed of two 1/8 x 3 x 36 inch sheets of SIG RC medium balsa. Lay the two sheets one on top of the other selecting the straightest esges for the top. Lay out side profile of model with bulkhead positioning..." 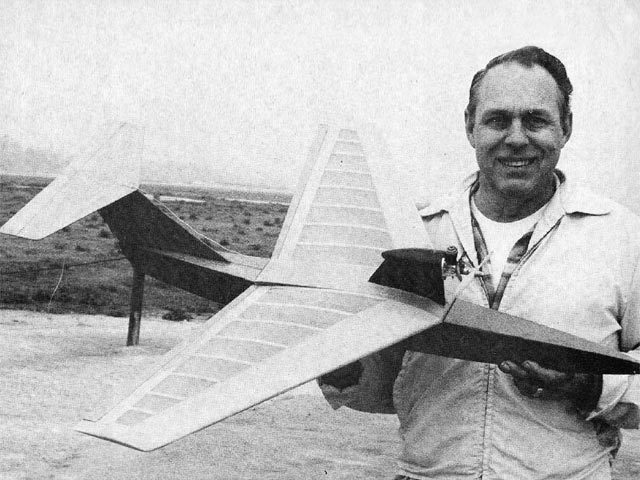