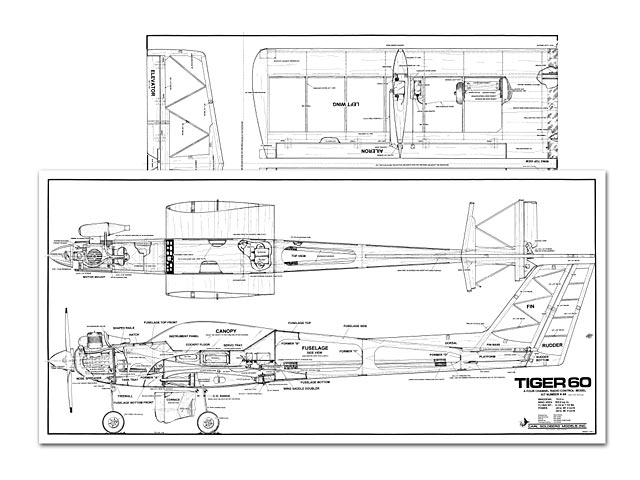 Quote: "Hi, I'd like to submit these plans for the Goldberg Tiger 60. It is usually built as a fixed gear low-wing sport plane, but for a time they offered it in a package with pneumatic retracts. The included plans can be for either version, since the retracts use a supplementary manual."

Note this is the original 2-sheet plan as supplied in the Goldberg kit. But there are no formers. For a later CAD-redrawn version of this plan (which does include formers) thanks to AlanSinclair, see Tiger 60 (11032).

Here's an R/C feline that can be tame and ferocious. It uses tab construction to build into a ship with both outstanding aerobatic and slow flight ability.

I had recently built a 40-size Tiger 2 as a change of pace from my pattern models, and it has been everything I expected, plus more. So, when the opportunity to build and review a Tiger 60 presented itself, the choice was easy.

The design is really a good, broad ranged one. Goldberg's Dave Patrick, an internationally competitive pattern pilot and aircraft designer, had a hand in the transition of the older and well-respected Goldberg Sky Tiger into the current Tiger 2 and Tiger 60 designs.

Let's take a look: The quality of the materials was quite good. There was an obvious effort in the selection of balsa for the wing tip blocks (they were light), the ailerons (they were stiff and straight), and the sticks to build the tail assembly (they were medium weight and straight). Die-cutting of the balsa ribs, and of the numerous lite ply fuselage parts was good. Most of the small hardware was provided.

The plans show a separate servo for each aileron. Excellent! That makes the aileron linkage a straight rod with a clevis. That results in less flex and slop than in the traditional torque rod linkage used with a single aileron servo installation. Also, there is no concern of the aileron linkage getting jammed by wiring or padding in the fuselage.

A radio with separate channels and a mixer for the aileron servos is not required. If you have one, by all means use it. But, a standard 4-channel radio using a 'Y' cord from the receiver to each servo is fine In either case, tape the extension to the aileron plug joint; it never hurts to pay a little homage to Murphy's law.

The plans also show an antenna tube to route the receiver antenna inside the fuselage. Nice feature, it improves the model's appearance, and protects the antenna from harm.

Putting it together: I'll spare you the usual (and dull) stick-by-stick building story and suggest you follow the Goldberg instruction manual. The text and illustrations are good and will spare you the excitement of building sequence errors! There are a few minor glitches in the instructions, but no big errors. If you have built a Tiger 2, the Tiger 60 will seem very familiar as you build.

The lite ply 'lock tab' fuselage construction shortens building time and ensures good alignment. Jigs are supplied to set up the dihedral angle when joining the wing halves, and work nicely. They are improved and easier to use than the ones in the Tiger 2 kit. Some careful block sanding will be required to even up the wing halves before joining them. I added two layers of 2-oz fiberglass cloth to reinforce the top and bottom of the center section of the wing in addition to the strip of 6-oz cloth provided in the kit..." 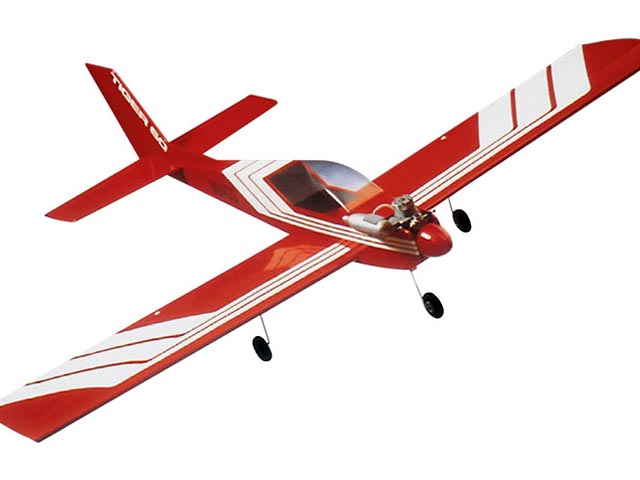