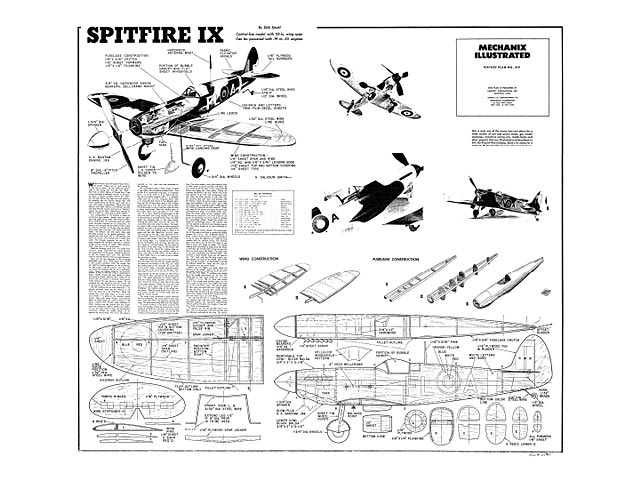 Quote: "WHEN Winston Churchill spoke those immortal words, 'Never was so much owed to so few by so many,' he was referring specifically to the young men who flew the 'Spits.' And truly no other fighter of World War II has a more enviable or dramatic record. In the darkest hours in Britain's modern history the Spit was the only fighter that kept the torch glowing. So versatile was the Spitfire design that with minor modifications the planes were used for a very wide range of operations. There were day fighters and night fighters, low-altitude pursuits and high-altitude pursuits, and even a 'Seafire' version for carrier duty. Rolls-Royce engines of 990 to 2,000 hp were used in these models.

The configuration of the Spitfire is ideal for control-line gas models. Simply built for lightness and good flying ability, this miniature Spitfire is nevertheless very attractive and very much worth the effort required for its construction. To attest to the strength and durability of the model, we call your attention to the fact that the photos were taken after more than 100 flights had been made. An Ohlsson .23 with rotary valve and Glo-plug proved to be amply powerful. The original was also flown with a .199 Bantam, but stunts of course were limited with a plant that small. We strongly advocate the use of Glo-plugs because the resultant reduction in ignition weight will be turned into higher flight performance. And now to the construction.

Build the fuselage crutch first. It is made from 1/8 x 3/8 balsa. Note that the engine bearers are integral parts of the crutch. Space the bearers to suit the engine you'll use. The bell-crank mount is inserted between the two engine bearers. 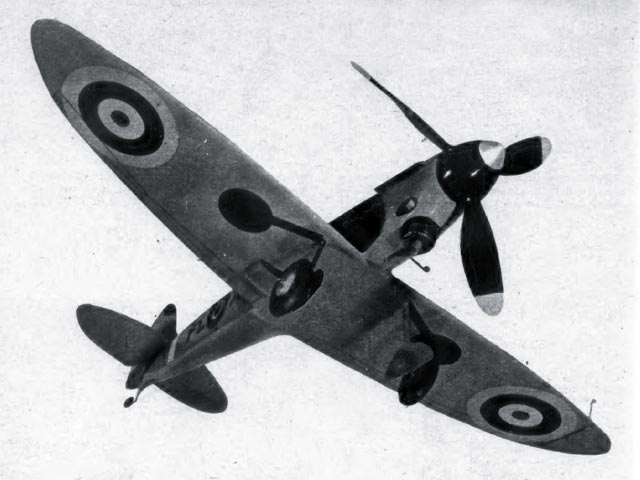