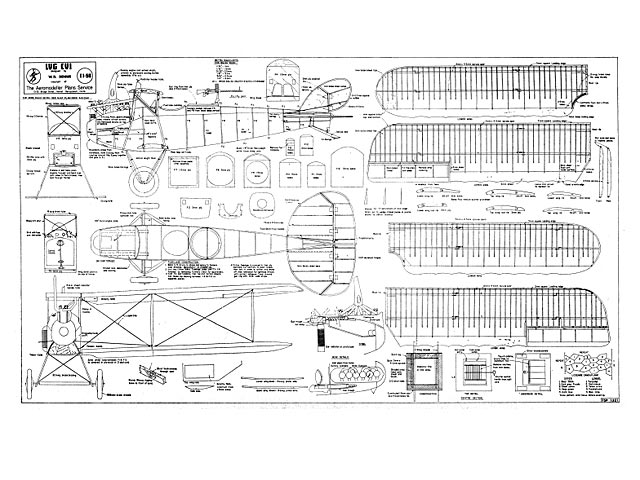 I DECIDED to build a model of the LVG after having seen the superbly restored machine in the Shuttleworth Collection. This was in spite of some misgivings about possible stability problems associated with the small tail areas and short moment arm, but as it turned out, the model flies very safely with careful trimming - but more of this later. The original was powered by a Mills 1.3cc diesel. This engine is really too large, but was chosen because it fitted well into the dummy engine! Any 1 cc motor (or even 0.75cc if built light) should provide ample power.

The construction closely follows the techniques described by Eric Coates in his excellent Flying Scale Models series of articles in AeroModeller. The model is not difficult to build, but great care must be taken during material selection in order to keep the weight, and hence flying speed, as low as possible - one should aim for around 21oz all up. Additional scale detail is best interpreted from the photographs and scale drawings in Plan Pack 2941 - available from AeroModeller Plans Service as order no. 2941, price 80p including post.

Wings: Trailing edges are prepared from stiff quarter grain sheet - it is worth spending some time getting the correct contours between the 'ribs'. Make all the ribs by the 'sandwich' method with spar holes, and then cut down the required number to form the false ribs, which show on the top surface of the wing only. The main ribs are slid onto the spars to their correct positions and the spars then pinned down to the plan with appropriate packing before gluing.

The ailerons have pronounced washout and should be jigged up during assembly with wedge-shaped pieces of sheet at the position indicated, in order to obtain the correct twist.

Tail surfaces: The outline shape is cut out of stiff 1mm sheet and the positions of spars and ribs marked on both sides. The structure is then built up on either side of the sheet and sanded to section.

Fuselage: Two sides are cut from light 1.5mm sheet and are assembled with the formers 10-13 which should already have the undercarriage, cabane wires and tubes attached as necessary. The remaining formers are then added, taking care that the fuselage remains square.

The fin and tailplane should now be added, together with cockpit details, before completing the top and bottom sheeting. Note that the top rear decking consists of separate panels.

The nose must be beaten from sheet aluminium. Carve and sand a hardwood block to shape - minus the thickness of the metal and drill through for the engine shaft. The sheet of annealed aluminium is held against the front of the former with a large nut and bolt, clamped in a vice. The side panels are then easily bent to shape with the fingers over balsa formers, and are held in place by single screws locating in blocks in the fuselage.

Whether you are building the prototype (cowled engine) or production version (uncowled), the dummy engine or cowl is attached to one of the side panels and is detachable with it.

The entire fuselage is now panelled with plywood, as on the full-size. The position of the panels is shown on the plan, and these should be accurately cut out of Imm ply. Each piece is boiled in water for 10 minutes to soften the wood, and as much of the inside surface shaved off as you dare - this is essential to avoid excess weight. When dry, the pieces are attached with an impact adhesive.

Finally, the plywood is doped and sanded to a smooth finish and fuel-proofed - if the latter is not done, oil gets into the joints and seeps along the grain, looking most unsightly.

Covering: The wings and tail are covered with lightweight tissue and given one coat of dope. Silk is then laid over the tissue, dry, and dope applied through it. If you are applying the lozenge camouflage, the pattern must be traced onto the tissue beforehand. The method I used was to mask out four of the five colours with Humbrol Maskol rubber solution and then dope over it - repeating the process. The mauve/green finish of the prototype is much easier!

Trimming: The model is relatively insensitive to rudder and elevator settings and seems to fly naturally in large diameter circles, with no tendency to spin in - I believe the aileron washout to be a factor in this. Trimming is more a matter of finding the optimum CG position : if it is too far back, the model has a tendency to stall on power, while the glide is steep if balanced too far forward.

With the original model, take offs are something of a lottery! The axle is rather far back and hence nose-overs are always a risk. This was because I made the mistake of bending the undercarriage main legs to the exact scale sweep-back. As anyone who has used the torsion bar type U/C will know, the legs do take a 'set' about half an inch back after the first heavy landing, so I would advise taking this into account, and bend the legs slightly forward of their intended position.

When properly trimmed and flying on low power, the model is very stable and most realistic in the air." 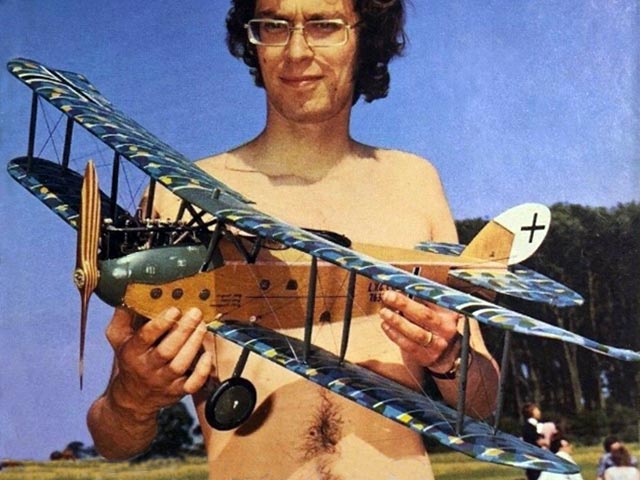 No, don't build the model on the cover! Or, at least, as it is designed. I can't remember why I made it so small but I suspect it was to fit the physical size of the exposed engine. The result was a model too heavily-loaded so some severe lightening is called for. I always felt the fin/rudder was too small. As for the photo, I offer the 1976 historically hot summer as mitigation.
bill dennis - 24/11/2021
And it took you 45 years to tell us not to? :-) Come off it, your plan makes up for a beautiful model as the pictures bear witness. There's a lot of material that can be left off to lose weight, and I don't know about your fabulous hex scheme but I'd bet it didn't help with the weight equation either. No need for self-flagellation - and you could always build another one, the flying season is near :-)
Miguel - 24/11/2021
Add a comment