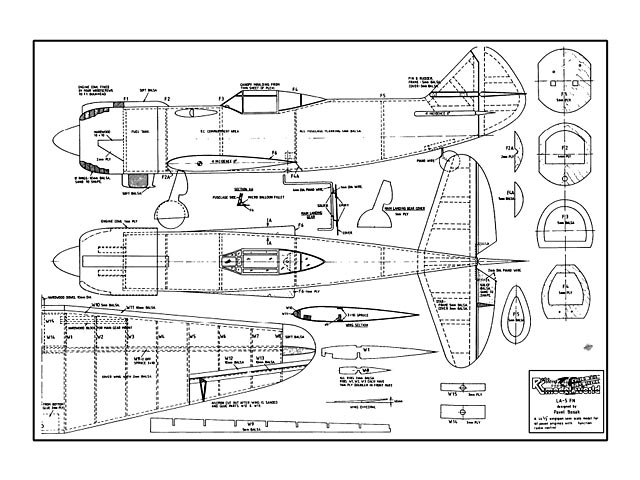 The Lavochkin is another of my 'Famous Fighters of World War II' series. So far the aircraft in this series have been high powered with a high wing loading, rather like the real thing. The Lavochkin is no exception, however, a good pilot can perform a range of manoeuvres up to F3A category standard with her.

Wings: The wings are first to be constructed, W1 to W8 are made by the sandwich method (using required number of blanks between
plywood or alloy templates of both root and tip, then shaping en masse). All spar notches are added at this stage, this way the ribs are produced for half a wing. The whole process is then repeated for the other half. Ribs W1, 2, 3 are strengthened by using a 1 mm plywood inlay before fitting the beech undercarriage block. Both spars can be fitted now and the wing halves joined, make sure that both wing halves are absolutely in conjunction with each other and that no dihedral or anhedral is built in advertantly.

Before setting aside to dry, add false leading edges and trailing edges. When the wing is set the undercarriage legs and bearers can be made up and the bottom of the wing skinned. All aileron pushrods, cranks, or flexible snakes can be added now before the top skin is fitted, when this has been done sand the whole wing and cut away both ailerons. These can then be made up and hinged using your favourite method, although the prototype used nylon hinges.

Fuselage: It is best, as with the wings, to make up a kit of parts before you start to assemble the fuselage. Formers F1 to F5, fin, rudder and stabiliser are all of the same type of construction, ie 5 mm balsa covered in 3 mm sheeting so these parts are tackled first.

The best way to assemble the fuselage is in a jig, if you do not wish to go to such lengths then assembling the fuselage using formers F1, F2 and the side planking is the easiest way. Using this method though warps and twists can catch you out, so take care. When thoroughly dry formers F3, F4 and F5 are added along with the rear top decking. The stabiliser and fin are fitted after first making sure all is square. Control cables, tank and bottom sheeting is next, leaving you with room to fit all radio equipment through the gap where the cockpit will eventually be situated.

The tail skid is made up from 2mm wire screwed to a beech block and cemented to the inner fuselage. The cowling is made up from a piece of plywood to the same diameter as the fuselage and finished off using six 10mm thick balsa rings. The first is fixed inside the cowling the others are cemented onto it, the whole construction is then sanded to shape as per the plan. The wings are a straightforward screw fix to the fuselage. The canopy has to be made up using a balsa blank over which heated acetate sheet is moulded.

Finishing: The model is now ready for a final sanding and then it is covered in tissue, shrinking dope is used, followed by a fuel resistant finish. All radio gear is finally installed together with your choice of engine, the wheels are fixed into place using soldered collets and the CG position is finally fixed as per plan.

Flying: The LA5 should always begin its take off run with full throttle and pointed into wind. The ground handling characteristics, as with the full size aircraft can be both brutal and unpredictable if take offs are tried downwind or crosswind, so, aircraft into wind, full throttle, elevator held in the full up position, correct any swing with rudder, as the speed builds ease off the elevator until the tail comes up by itself, she will now fly so gently ease back on the elevator and away she goes. When safely airborne trim for a slightly nose down attitude, in this configuration any form of aerobatics can be accomplished. Landings are best accomplished with extra speed in hand, the LA5, because of its high wing loading will not fly slowly. Once down the roll out is long and trouble free. Happy landings. " 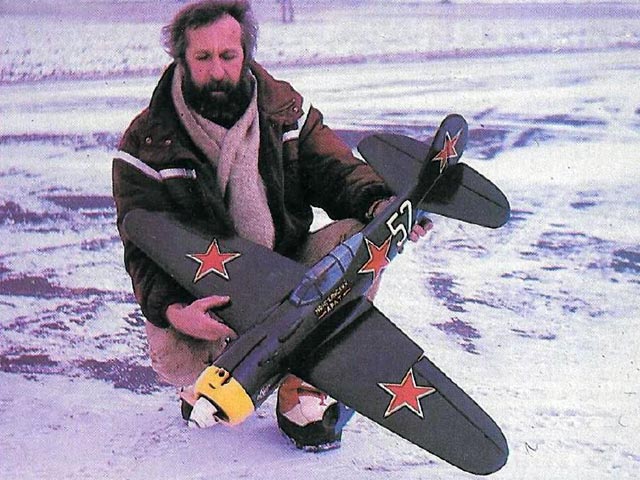