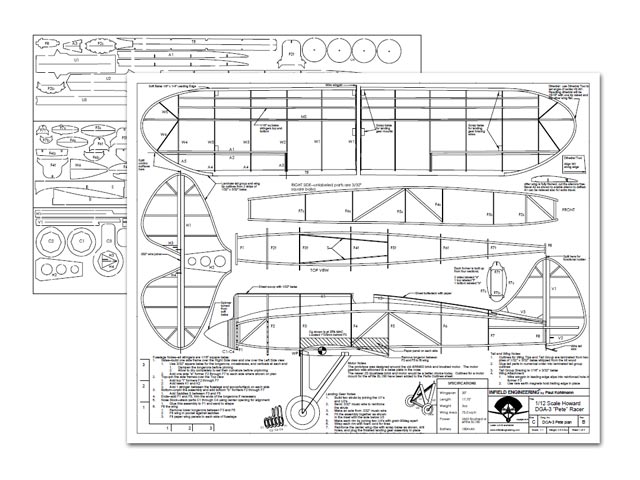 Note this plan is a free download available from the Model Aviation site at http://www.modelaviation.com/dga-3-pete where it appears along with the full build text and some great build pics. Also a free download of the plan in tiled format.

Quote: "Some time ago, while looking for a new aircraft to design, I ran across a photo of a little racer with a towering scoop in the nose. Leaning against the wing was a crafty-looking character whom the caption identified as Benny Howard. The airplane was the DGA-3.

Built in 1929, the DGA-3 was nicknamed 'Pete' and flew on a 326 cubic-inch Wright Gipsy inline four-cylinder 90 hp engine. This setup allowed Pete to fly at roughly 160 mph, which wasn't that fast even for its day, particularly when one considers the competition that Benny faced when he raced for the 1930 Thompson Trophy.

Benny found himself up against two Travel Air Mystery Ships, the Laird Super Solution, and Capt Arthur Page’s ill-fated Page Racer - all of which had top speeds well above 200 mph. But Benny was tenacious and hung in while a number of other entrants dropped out because of mechanical failures and Capt Page's fatal crash. When it was over, Benny captured third place and a purse of $2,000.

Miraculously, the Ike, the Mike, and the Pete are all still around. The Pete has been flown in recent years and is currently housed at the Crawford Auto Aviation Museum, part of the Western Reserve Historical Society, in Cleveland.

Design: The goal of this design was to repurpose an AR6400 'brick' from a worn-out UMX T-28. The brick is a compact little system that integrates a Spektrum receiver, brushed 1S ESC, and two servos into a tiny, 3.9-gram package.

The result is a 20-inch Free Flight-style (FF) airframe with full-house controls that weighs 70 grams. The tiny Pete flies well on the brushed 1S motor, but today there are more powerful bricks with 2S brushless ESCs in similar-size packages. My Pete will be ready for this upgrade as soon I can distract my son's attention while he's flying his UMX Beast.

The plans for the Pete have been cleaned up and are offered through Model Aviation as a free download. It’s a simple little project that can be cut by hand. Alternatively, a nice laser-cut kit is available from Manzano Laser Works.

Building Pete: Begin the project by laminating the outlines for the tail group and the wingtips. This process will sound more difficult than it is. If you try it, you will find that the resulting outlines are stronger and lighter than those built-up from balsa sections.

The first step is to cut 1/32 x 3/32 strips from the edges of the kit wood. Soak the strips overnight in water mixed with a splash of ammonia.

While the strips soften, make forms by tracing the inner edges of the outlines from the plans onto sheets of paper. Glue the tracings to foam poster board. Cut along the lines and pop the forms free. Cover the cut edges with clear packing tape so that glue won’t stick to them.

After pinning the forms to the building board, pull one softened balsa strip tightly around each form, pinning it into place as you go. Apply carpenter’s glue to a second strip. Stretch this strip around the first while moving the pins to hold the pair tightly against the form.

After it has completely cured, remove the outlines from their forms and pin them down to the plans. Glue the kit parts that form the inner structure in, followed by the 1/32 x 3/32 balsa bracing cut from the kit wood.

Split the control surfaces by cutting through the outlines where shown on the plans. Bevel the leading edges (LEs) of the elevators and the rudder to allow ample deflection. Narrow CA hinges work great on these tiny models..." 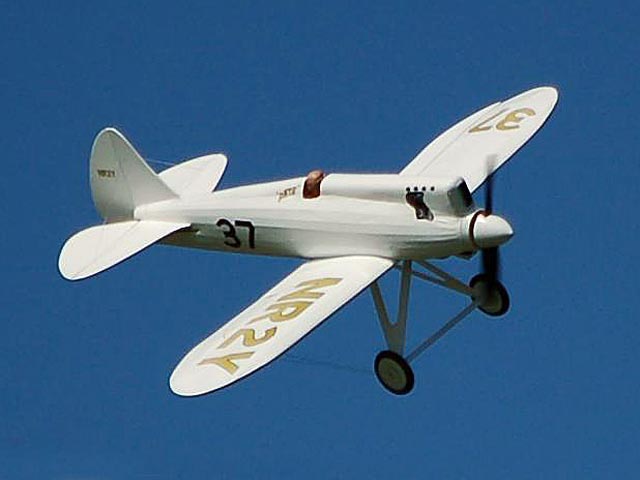