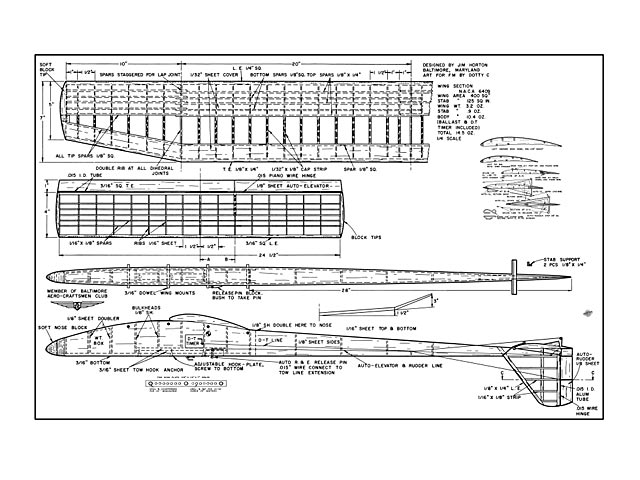 Quote: "Auto-rudder, auto-stabilizer, variable-trim wing and a clockwork DT - who could ask more from a single Nordic? A/2-X3, by Jim Horton.

Probably no other class of free-flight model has as much to offer the model experimenter as the A/2 Nordic glider. Since it is launched from approximately the same height each flight, the effect of design changes can easily be studied.

The X3 was not designed, but evolved. It is the third of a series. The first model was set up to give maximum dead air time. It had a 100% CG with minimum incidence difference between wing and stabilizer. The model glided so clean that we had to have an auto-elevator to give a low airspeed dead air tow.

The X3 was an attempt to combine the best features of the first two designs in one model. It has a two position wing which gives a 50% or 100% CG set up. The top of the body is designed to give the correct incidence at each position. The model is equipped with an auto-elevator for calm air tow. Since both set ups give high lift, low airspeed tow; tow stability is very good. In fact, the harder you tow the straighter the cliub. Now to construction.

WING: By building and covering wing first, you can work out any serious warps while working on body and stab. Select wood carefully, medium stock for spars and light stock for all other members. Make two templates of the main ribs and two templates of the tip rib of 1/16 sheet. Pay close attention to spar notch location as spars are staggered for lap joints at the dihederal breaks. Using the templates, cut out the ribs in groups of about eight. Begin work on the left center-section, pin down the leading edge and trailing edge. The trailing edge should be shimmed up in front so that the bottom follows the undercamber curve. Fit and cement the ribs in place. Cut the top spars to the correct lengths, allowing for the lap joints, and cement them in place. Follow the same sequence for the other panels. Block up each panel for correct dihederal and cement the sections together. Cement in the bottom spars. Cement soft blocks to the tip ribs and cut them to shape. Sheet cover the wing and cap strip all ribs. Sandpaper and cover with Jap tissue. Apply about 6 coats of dope.

Check the wing carefully for warps. A slight wash-in on either side is de-
sirable, and establishes turn direction for model. The model must turn into the washed-in wing for spiral stability. Too much warp causes excess drag and wing should be weighted on flat board until it is minimized.

FUSELAGE: Cut out two sides, two doublers, and all bulkheads of 1/8 sheet. Cut the bottom pieces of 3/16 sheet. Cement the side doubers to the bottom pieces and cement in the front bulkheads. Cement both sides to the doublers. Cut and cement in the re-maining bulkheads and wing dowel rods. 'V' out the top of the body at the wing positions so that wing rests flush on the body. Cover the top and bottom of body with sheet..." 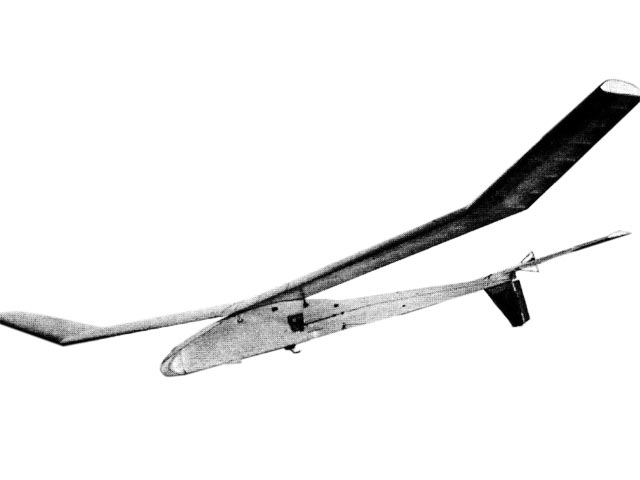