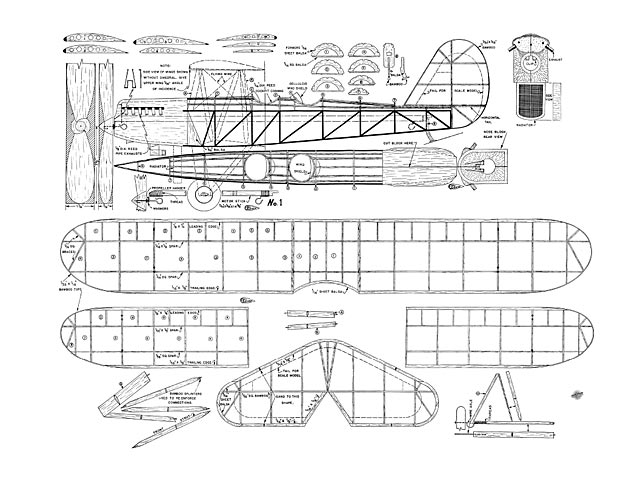 Quote: "How to Build a Russian Fighter. The First Complete Description and Plans of a Flying Scale Model of a Russian Airplane to be published in America. The Two-Place Fighter D-1, by Elmer Pilzer.

THE great progress made by the Russians in their development of efficient airplanes, is well exemplified by the general purpose D-1 type of plane. The Soviets have clearly designed this plane to serve many purposes efficiently. It may be used as a two-seater fighter, a light bomber, an attack plane, and as a reconnaissance or observation ship. The same type of ship was used in rescuing many of the stranded Russians exploring the Polar regions.

The D-1 is powered with a Russian built twelve cylinder Vee, water-cooled engine of 650 hp, type M.17. The rectangular fuselage is made of welded chrome molybdenum steel tubing and is covered with fabric. Its armament consists of two sets of twin machine-guns, one set synchro-nized to fire through the propeller and the other set mounted over the rear cockpit. This plane is capable of carrying a load of bombs or a torpedo. Russia can proudly put her faith in such a dependable ship as the Russian Fighter D-1.

By carefully following the instructions and working over the full-sized plans, you will not only produce a biplane of unusual strength and light-ness, but also a model which will give you continuously long and steady flights.

Fuselage: We are going to assemble this model somewhat on the same style as the real airplanes that are made in the fac-tories.

In order to make the side of the fuselage in one piece, it will be necessary to join drawings No.1 and 3 together and pin them on a soft pine working board. Now pin transparent wax-paper over the draw-ings and start making the sides of 1/16 sq balsa. The sides are indicated by the very heavy lines. After both sides are fin-ished, with the aid of carbon paper, trace and carefully cut out the formers of 1/16 sheet balsa. When this is done, cement 1/16 sq balsa under the formers. This strengthens the fuselage considerably. Then, according to the top view of the fuselage, cement the formers in their respective places, using 1/16 sq balsa for the bottom of the body. Now cement the stringers in the notches of the formers and put on the 1/16 diam reed cockpit coaming.

Nose Block and Propeller: Select a medium soft piece of balsa for the nose and proceed to trace and cut the side view. The same is done with the top and front view. Then cut the block in half from the top down and cut out the inside until the walls are 1/8 in thick. Now cement them together and put in the wire clip for the motor stick. Be sure to put a liberal amount of cement on so as to prevent the sides from coming apart..."

Quote: "This plan is by Elmer Pilzer and was printed on multiple pages in the June 1934 issue of Universal Model Airplane News. The aircraft was identified in the article as a 'Russian D-1 Fighter', but it is actually a Polikarpov R-5. This is the first plan for this aircraft that I have run across. The wingspan is 24 in." 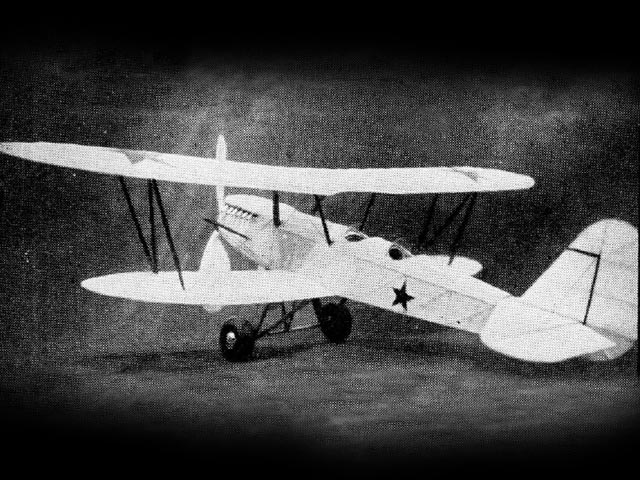