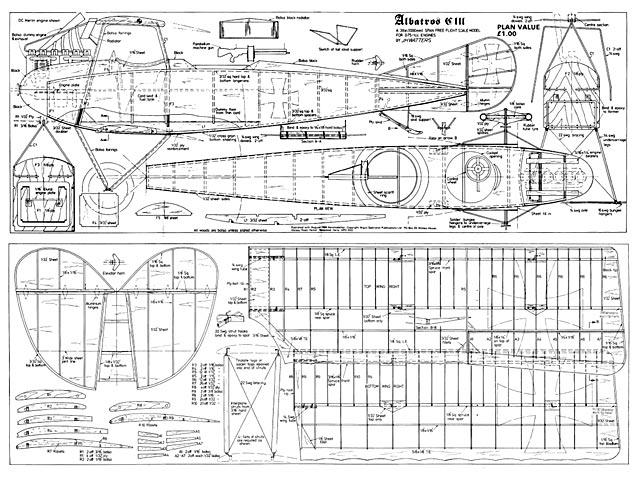 Coming into service late in 1915 and continuing to serve on most of the war fronts until early 1917, undertaking throughout the period many different roles, from photographic to light bombing duties.

My interest with this type of aeroplane is a result of building an Albatros CI radio-control model some years ago for the BBC television series 'Wings.' The Atbatros has many attributes to make it a good free-flight model and as a result of its long service career various colour and camouflage schemes can be applied.

Tailplane and fin: Cut out the shape of the tailplane and fin front in. medium hard sheet. Draw onto one side of the sheet the positions for the ribs and spars and then, by poking a pin through the sheet, the positions for the spars and ribs can be matched on the other side. The main spars are made from 1/8 sq and the ribs from 1/8 x 1/16. The leading edge from 1/32 in sq and the trailing edges from 1/16 sq.

The leading and trailing edges are formed by nicking the inside of the strip with the thumbnail, nicking as required to form the radius required. The structure is first built up on one side of the 1/32 sheet core, I use PVA white glue for building up all structures, as this glue does not shrink and induce any twisting.

After building up one side of the tailplane and fin, the opposite sides can be built by the same method. When all the parts have been completed and set, they can be sanded smooth to an airfoil section. The elevators and rudder although separate from their respective tailplane and fin, are attached by small pieces of thin aluminium or tinplate, which act as stiff hinges.

Wings: Start to build the wings by making plywood or aluminium rib templates for both the top and bottom wings, with the spar holes and notches cut out. The majority of the ribs and all the riblets are cut from 1/32 medium grade balsa. The ribs are best made by the sandwich method, from rectangles of balsa slightly larger than the templates then pinned together between the templates and sanded to shape.

With all the ribs still sandwiched together, the leading edge notch and spar holes can be cut. The holes for the central spars are made by first, drilling through the ribs and then filing out. To make sure of a good fit, a spar can be pushed through the block. After shaping, the ribs can be cut to length. Riblets can be made by the same method, or by cutting each one out around a template.

In building up the wings, first pin down the trailing edge (which should have the rib slots already cut in) and pack up the front edge to suit the undercamber. The ribs are slid onto the spruce main spars as a block and then each rib is slid to its correct position before slotting into the trailing edge and pinning down. Next add the leading edge, riblets and tip sheeting.

When the wings have set remove from the building board and add the remaining bottom spar and the 1/16 sq strips to the top and bottom of the wing tips, forming by nicking as described for the tailplane.

The ailerons are constructed separate from the top wing but are best built along with the wing to obtain a close fit. A design feature with some German aircraft of this period was to have reflex ailerons, this model is no exception. Although there is quite a bit of work involved in building up the ailerons, the results are worthwhile. Cut out the ribs for the ailerons as shown on the plan and with the piece of trailing edge blocked up, build up the ailerons as you would the wings..." 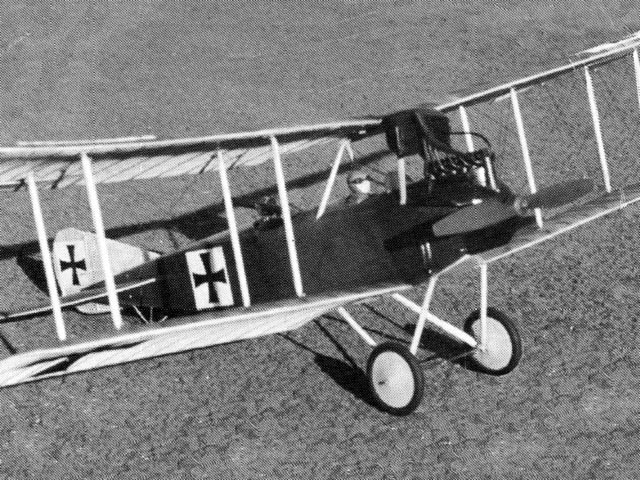