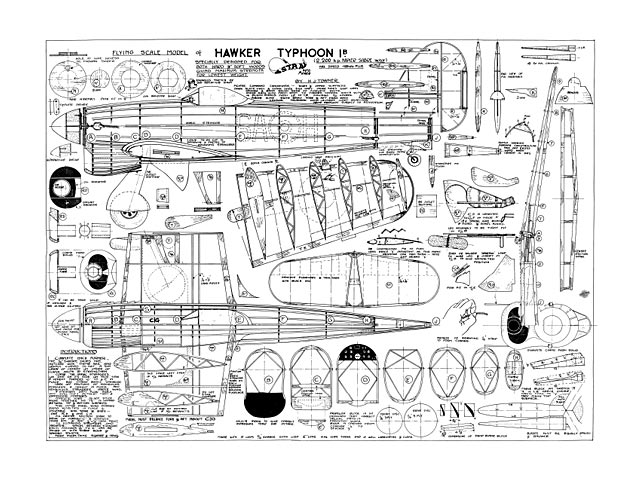 Update 25/2/2022: Replaced this plan with a clearer version, scanned from original at 600 dpi, thanks to GuyColeman.

Quote: "Instructions: The present series known as MK II have been specially developed and tested in the Astral Research Dept, and flown under all sorts of weather conditions and have proved themselves capable of standing up to a lot of rough usage.

Owing to war-time restriction of Balsa wood, these designs have been developed in order to make a satisfactory model of the harder and heavier woods available. If these instructions are carefully carried out the all-up weight of the completed model should not exceed that of the usual balsa type.

The MK II type ribs and formers are actually lighter than the same sizes made in the usual type of balsa method, with a considerable increase in strength.

In order to still further reduce the weight and improve performance, the so called built-in jig method of building upon a substantial keel has been abandoned. This may entail a little more care on the builder's part in the early stages of assembly, but time well spent here will be handsomely repaid in the final performance.

It will be seen that the ribs and formers are built of strip wood 3/64 x 1/16 and suitably bent to form the necessary curves. The bending is done by notching or indenting the 1/16 face of the strip with the thumbnail and gently curving the wood at the same time, so that the notches are on the inside of the curve. If this is done gently and stage by stage, getting a sharper curve on successive stages no crack need occur. Try a sample piece of wood first. It is not necessary to steam or soak the wood, but the wood should not exceed the 3/64 thickness for good results. Sand it to size if necessary.

Where the curve is excessive for this construction a cut-out piece is used such as the top and bottom of curved formers. This top and bottom is pinned to the drawing using greaseproof or thin tissue paper between (to save the plan), and the curved strips pinned into position. Let these strips extend an inch or so beyond their actual length which can be cut off and trimmed when the cement is set.

The cross pieces or braces are now added, cutting the ends to suit the correct angle and making everything a good fit. Put a spot of cement on both faces to be cemented together and it is as well to lightly smear a thin layer of cement on the side of the curve that is notched.

The two basic stringers are now prepared leaving them a little longer than necessary and giving them a gentle curve to coincide with the outline on the plan.

Lay one basic stringer on the side view of the drawing, concave side up, and either pin or hold in place with weights, whilst the two or three formers which are located more or less on the straight part of the basic stringer are carefully cemented into place on their sides. These should be checked with a set square or supported with small blocks of wood or even held between the pages of a partly opened book standing upright.

When fairly set the other basic stringer can be laid on the top and cemented in position, held in place with pins, preferably of the thin steel type with porcelain heads. These pins can be pressed right through the wood without splitting or weakening in any way. The ordinary pin is generally too thick. Care should be taken to see that the stringer that is now on top aligns with the stringer below and is best checked by using a set square pressed against the lower one when the vertical edge should just touch the upper stringer at all stations.

When set the front former can be added and also the stern post and the remaining formers inserted. Add remaining stringers and if they do not flow in a true curve little chips of wood can be inserted between it and the offending formers.

The centre section main spar is now added and must be square with the fuselage, make sure it makes a firm join on its correct cross piece on the former concerned and that it is the correct side of the former that the drawing calls for.

Complete each wing panel outline by pinning to plan and add ribs - one right hand and one left hand.

Measure the distance between each wing tip and the stern post to ensure the wings being square with the fuselage, and make certain that the same amount of underside of each wing is visible when viewed from the front.

It is advantageous to plank the front half of the fuselage up to about the windscreen with. odd bits of woods with edges well chamfered inwards, cemented between the formers and projecting slightly. These can then be sanded to shape, bringing the weight forward and making a good contour of the cowling..."

George Hollingdale was a fairly prolific scale modeller in the 1990s, turning out a number of usually vintage designs with a great deal of skill, he was a gunsmith by trade and lived in Loughton Essex. Haven't seen him for a while, hopefully he is still around
Mike hollamby - 11/10/2019
It appears Mr Towner has made two variations on a theme. This Typhoon plan has a non-identical twin in oz4302 with the same wingspan but this one is rubber free flight and oz4302 is IC CL.
Miguel - 30/10/2019
Add a comment