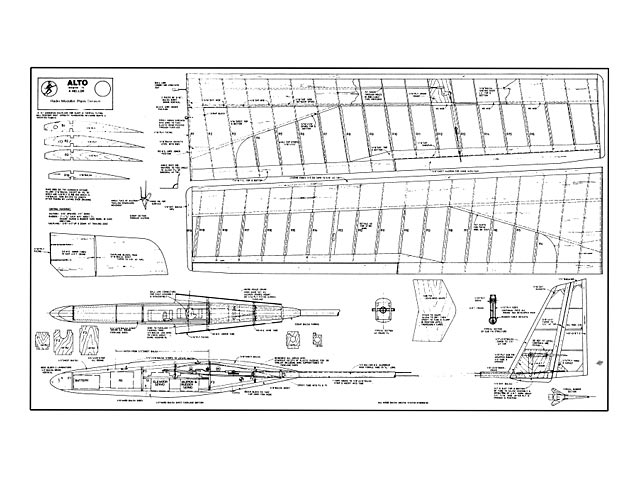 Quote: "Have you ever arrived at your local slope only to find the wind too strong for the lightweight floater you have just carried to the top, or too light for your aerobatic model? At this point most of us wish for a good, all-round model which will fly in all conditions and have to either risk flying a model unsuitable for the conditions or pack up and go home!

After several years of such frustrations I decided it was about time to design the all-round model that I needed. This need was also partly brought about for me by the fact that the locally available slope sites are quite small both in height and length! This means that, at low wind speeds, lift is very light and thermal assistance is always welcome, while at wind speeds around 15-20mph and above the lift becomes fragmented and unable to sustain a smooth area of slope lift.

So the model needed to cope with these conditions would have to be a good thermal climber to make use of all light lift, yet still be able to penetrate into stronger winds and punch through turbulence. The design criteria were further complicated by the fact that I wanted the model to be able to perform at least mild aerobatics to liven up my flying time in light or rough weather!

Alto is the result of my deliberations to try to produce such a model and has lived up to all my expectations with performance to spare. Thermal performance is excellent; this model has often overtaken 100S models in the same thermal. and penetration is all that could be asked for, ballast seldom being required. Although only mild aerobatics were envisaged when designing the model, this is one area where she really excells. Loops, stall turns (yes, even with coupled rudder!) and rolls, though not the twinkle variety, are all easily accomplished. Loop/roll combinations are also quite easy providing plenty of speed is built up first. But to really stretch her out try a bunt from inverted (upwards) or level flight (that's downwards) or fly towards yourself, push the stick forwards for a half bunt and roll off the bottom over the slope edge, if you have the nerve! In good lift inverted flight is easily maintained and if you are well up in a thermal there is no need to worry, just dive away or perform aerobatics on the way down - the wings won't fold on this one!

The thermaling capability is taken care of by the E 193 wing section which works well over a very good speed range plus having good low drag characteristics, and seems, on this aircraft at least, to vary very little in handling from high to low speed flight. The rest of the aircraft is designed to maximise on the aerofoil performance by keeping to a reasonable wing loading of between 9-10 ozs per square foot. I have found in the past that this section performs better with a little load rather than lightly (6-8 oz/sq ft) loaded when it tends to lose its performance edge compared with less sophisticated aerofoils, like the Clark Y for instance. (That ought to rattle a cage or two!)

The fuselage is a pod and boom type as this seems to offer the least surface area and therefore less drag, and with the aluminium tail boom lots of strength. Using 1/32in ply to make a sub fin wrapped round the tube, produces a very neat, light and strong tail end, again with little drag.

By sweeping the wing back I have found that washout becomes unnecessary, the model stalling straight with no wing dropping tendencies. An added bonus to this set-up, is that when the model is flown inverted extra stability is gained by the reflex action of the undercambered section plus the sweepback, as on a flying wing! I found this out a few years back when flying a broad chord (15 in) low aspect ratio model on this section. At about 1,500 ft in a thermal I decided to half loop to inverted and begin a descent (no air brakes). After about 10 seconds of this the tailplane suddenly disintegrated into a shower of small pieces, however the rest of the model continued to fly as if nothing had happened and eventually made a perfect landing under rudder control only, still inverted and perfectly stable, some three or four minutes later!

Well that seems to have explained the reasons for building the model and some of the design philosophy. Controls are two-function working coupled aileron rudder plus all-moving tailplane - she will go alright without the rudder coupled but the turns are much smoother and efficient with it! An all up flying weight of around 40 oz and, with the centre of gravity as indicated, she should go perfectly first time. Finally, if you like your models to whistle and howl at speed I'm afraid in this case you will be disappointed. Efforts to keep down drag seem to have worked well and very little energy is wasted making noise on Alto.

Fuselage: Begin by cutting two sides from fairly hard, springy 1/8 balsa sheet. Pin to the building board and add the 1/8 x 1/4 in hard balsa outer framing, splicing the joints for maximum strength. Don't forget to make a pair! Whilst this is setting cut all formers F1-F5 and servo mount S1; you will find it easier to drill or fretsaw the 1/2in dia holes in F4 and F5 before cutting from the parent sheet..."