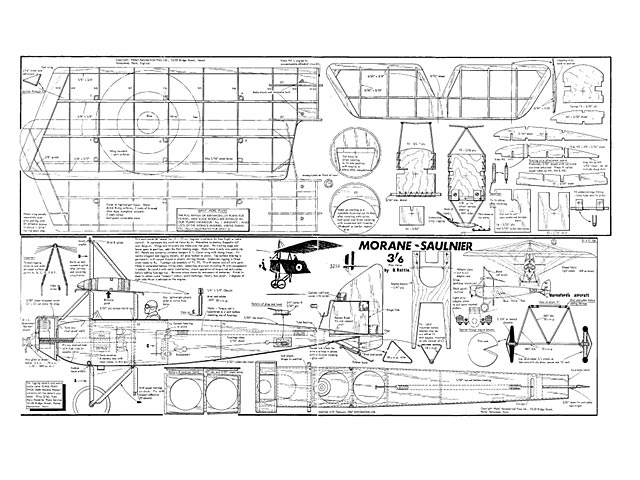 Quote: "World War I nostalgia in this small-field airplane will please the rudder-only fan who yearns for realism. And it's detailed. Morane Saulnier Type L, by D Rattle.

The Morane Saulnier Type L was a French designed and built aircraft of World War I, powered by an 80 hp. Le-Rhone engine. It had a span of 34 feet and length of 20 feet 9 inches. The model is of 1-inch-to-l-foot scale, differences from true scale being increased tailplane and rudder area and the inclusion of dihedral on the wings, these changes being made for stability reasons. The particular aircraft depicted, No 3253, was that in which Flight Lieutenant Warneford of the Royal Naval Air Service destroyed the German Zeppelin LZ37 on June 7, 1915 - for which he was awarded the VC.

No 22 of the 'Leach Heritage of the Air' advertisements published in Aviation Weekly, November 12, 1962, illustrates and describes this action.

Building: Wings and tailplane are built over the plan in the usual manner, care being taken to avoid warps. The wing halves are joined by dihedral keepers before covering. The king-post structure on the center-section and the rigging eyes on outer panels are added after covering.

Fuselage construction is commenced with a sub-assembly of engine bearer and formers F1, F2 and F3, these formers being complete with their 'wire-work.' Use a good hardwood glue on this sub-assembly. It is assumed that the builder has decided upon the escapement that he favors and also the engine. Former F4 will be modified to mount the escapement and engine hearer and F1 to suit engine mounting. The 1/16 in sheet fuselage sides are now added to this sub-assembly, other formers and the tail block finish the basic fuselage, which is then completed as per drawing. Note that top sheeting aft of cockpits is not done until the torque-rod assembly has been completed and operation of escapement checked.

The design is sufficiently versatile to allow any suitable miniature receiver, DEAC cells or pencells to be fitted at the dis-cretion of the builder. In any case, foam rubber packing should suffice.

The cowling presents no difficulty if built like a drum and then finished to shape. More experienced modellers may prefer to make it from aluminum or fiber-glass. It is an advantage on a cowled engine to use an extension compression screw for a diesel motor (such motors are popular in England, where our model was built - Editor) or for a glow motor to make two permanent wire connections, one to the plug, the other to the crank-case. These leads run to a miniature socket mounted in any convenient place on the fuselage side. In this way the cowling line is not spoiled by large holes for clips and damage from their use.

Your choice of engine should lean toward reliability rather than high power because the model is basically a sport type.

The rigging on the top surface is permanent, while that from the undersurface is attached by hook and rubber band to the vee-member from F3. On the full-size machine the wings were warped for control purposes by means of these wires, warping taking the place of ailerons (a common practice in the early days).

The undercarriage is hinged on the rear legs at F3 and is strapped to the dowel on F2 by rubber bands.

Examination of World War I aircraft indicates that finish was rough - whether a judge appreciates this fact is another matter. The standard of finish therefore is up to the individual. The cream color is intended to represent a fabric which has been doped, varnished and aged. The fully finished model should balance where indicated and initial gliding trials are recommended to correct the CG position prior to power flight. Wing loading is fairly light and the complete model should weigh about 12 oz.

Lightweight tissue was used for covering, with two coats of thinned clear, and two of thinned color dope."

Quote: "This is the missing page for OZ 1161, Morane Saulnier, as requested by Gregg. For the record the design was in Aeromodeller, February 1967 and in Grid Leaks, July/August 1965." 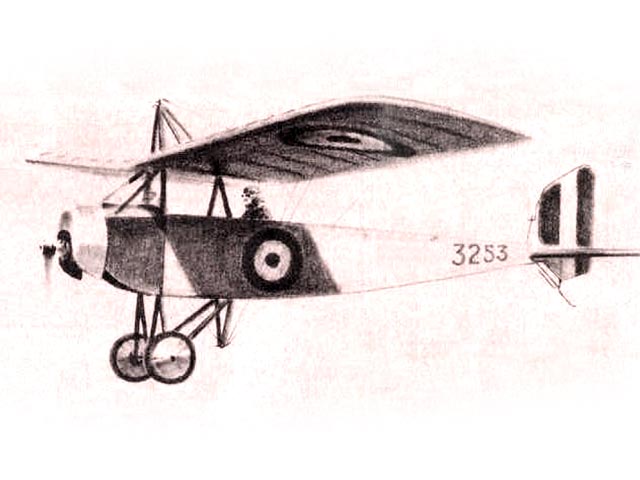