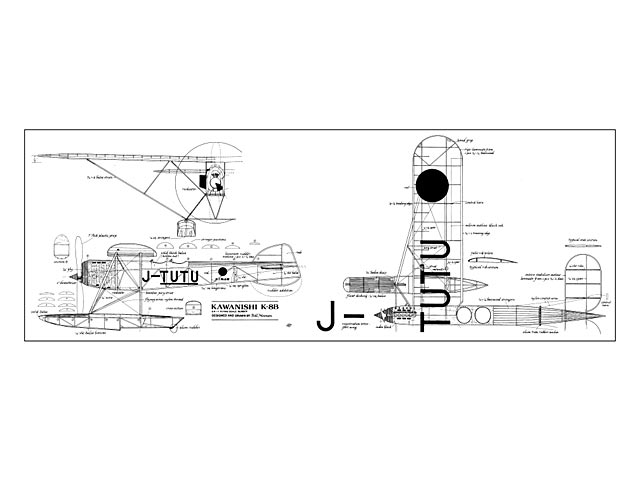 Quote: "A parasol design that has perfect proportions for rubber scale, and ROW at that! And you won't find this obscure subject at every contest. Near ideal for small R/C as well. Kawanishi K-8B, by Bill Noonan.

In 1977, while thumbing through a copy of Encyclopedia of Japanese Aircraft at the old San Diego Aerospace Museum library, I came across a wealth of photos and 3-views of obscure Japanese aircraft of the 1920s. The only catch was that the text was printed in Japanese. Fortunately, the publishers saw fit to throw in a recognizable word now and then, and to give aircraft specifications in metric. The aircraft manufacturer's name and the designation of the aircraft were in English.

The Kawanishi K-8B 'Seaplane Transport' was one that could hardly be ignored. Proportions are perfect for rubber scale. There is an abundance of louvers, pipes, openings and other details that con-tribute to the character of what is basically a simple design.

Further search for information provided meager clues. It is known that at least four K-8Bs were built, as there were that many registrations issued. One can only guess at the purpose of the aircraft. After all, a two-seat 'transport' on floats seems a bit esoteric. Purpose aside, it makes a fine subject, extremely stable and easy to fly. Ours has won first place in two annual ROW competitions sponsored by the Flightmasters Club, the most recent of which required the models to fly from a 12 x 16 ft man-made 'lake' (a plastic water-filled reservoir, 4 in deep). The model had no trouble in getting off the water in a grand fashion after about a 15.5 ft run, landing back on asphalt; none the worse for wear.

You may be saying to yourself - it's strut city! The K-8B does not lack in the brace-work department, but this isn't as formidable as it seems. A little studying of plans and photos should make it clear.

FUSELAGE: Fuselage construction follows the conventional practice of securing longerons and structural components over the side view of the plans. Longerons are 3/32 square medium balsa; the uprights and diagonals, with the exception of the one at the extreme nose, and the 3/32 x 1/4 in aft rubber anchor supports, are hard 1/16 square. These are 'set in' the longerons, giving a 1/32' air space between the structure and covering.

Make a right and left side in this manner. Fill in nose section with 1/16 sheet balsa. Add 1/32 sheet ply gussets at strut anchor points.

When the cement is thoroughly dry, the two sides may be inverted and pinned (not through the wood) over the top view. Cement in crosspieces. The unusual method of fairing in the rudder with the fuselage allows you to build the rudder top and bot-tom separately, or by making the entire laminated outline in one continuous piece, cementing it to the fuselage, and filling in the crossbraces and tab. 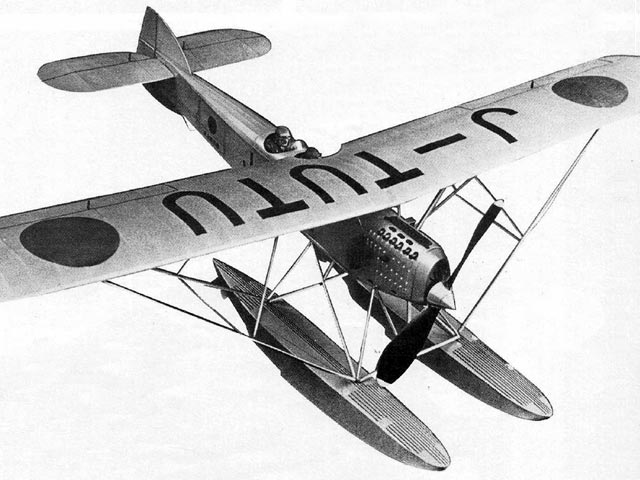