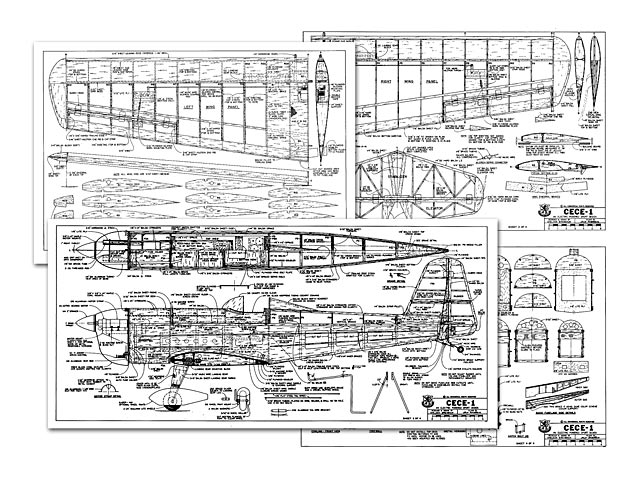 Cece Electric #1 was designed and developed after a chance visit to Toni & Addies Hobby Shop in Burbank, California. In 1983 I had to give up a hobby I started when I was nine years old. and a hobby that I loved and consumed most of my leisure time. Health problems prevented me from bending over or carrying heavy objects ie, field box, etc, Toni said, Why not build an electric airplane? And then and there, Cece Electric was born.

I had divorced myself so completely from the hobby that I was not even aware of elec tric airplanes. After much discussion and picking of Toni's brain for over two hours, I purchased an Astro 25 motor, direct drive, charger, 5UAF Futaba radio, and even the balsa wood. I made a rough sketch of Cece #1, wing area, span. length etc, and as soon as I arrived home. I immediately started the outline plans.

After one year of building, and a number of changes, the project is completed. The first model had flaps and aluminum landing gear, but proved too heavy. Surprisingly at 7 lbs, Toni test flew the first model and it took off and flew perfectly, no trim necessary, and the CG perfect. However, it was flying too close to stall speed and could not complete a loop.

I built a new wing, no flaps, and moved the landing gear back into the wing. The airplane now weighed 6-1/2 pounds. Toni flew it again and now it would loop, roll, Cuban eight, and flew well. Very stable. No tip stall, excellent flat glide and the transition from no power to full power - 0 - pitch. A pussycat to fly for a low winger, I use, and have used, the NACA 2412-2414 and 2415 airfoil section on 90% of all the airplanes I have ever built, and I have never found a better airfoil section for a combination of stability, aerobatics, and just all around excellent flying characteristics. However, it still was flying too close to stall speed.

Toni and Bill Young suggested gearing the motor and voila, I never dreamed it would make such a difference. I used a Rev-Up 13 x 8 4-stroke propeller. A perfect mate for the geared Astro 25 motor; 6500-6800 rpm on 16 cells, 6000 rpm on fourteen cells. It took off in about 15 feet, climbed at a steep angle (stalled at this angle with direct drive motor), completed tight loops, nice rolls, Cuban eights, inverted flight, snap rolls, Immeltnanns and Lomchevak. It also flew nicely at about half throttle.

The flight lasted almost six minutes using the throttle intelligently, and Joe Fosnot, who flies a Corporate Lear Jet and is an excellent radio controlled model airplane pilot, was all smiles. He said, and I quote: I now feel comfortable flying Cece # 1 and it is a superb flying aircraft.

I would now like to extend my thanks to Toni Naccarato. Joe Fosnot, Bill Young and Bob Hunter. Their help was invaluable. Thanks to Bob Hunter's fantastic new UFO cyanoacrylate glue, building time was reduced over fifty percent. I built the complete empennage in about six hours.

This was my first MonoKote job and Bob Hunter gave me some tapes by Top Flite showing how in apply MonoKote correctly and I also bought a book called. 'Toms Techniques.' These two references taught me enough to perform an excellent job for my first MonoKoting attempt. I highly recommend that you use Balsarite on the outer periphery only, for attaching the MonoKote to balsa wood, and on the fiberglass center section.

The airplane sports a vintage character of the thirties. Open cockpit, wheel pants. tail wires (functional), and cowlcd, wore the inverted Mcrrasco and Cirrus engines of that era, Aesthetically it is pleasing to the eye.

It is a very simple airplane to build, has fuselage with stringers for shape, simple flat built-up empennage, and a very easy to build taperwing. If you are tired of hybrid models, and have a little patience and skill, you will be pleased and proud of an aircraft that is a joy to look at on the ground and an excellent low wing aircraft. Had I kown when I started building the airplane, what I now know after a year of building and testing, the airplane would be another half pound lighter. If you select your wood carefully, you should have an aircraft at about six pounds, with 22 oz/sq ft wing loading, that should further enhance the acrobatic performance.

One more item before you start construction. Cece is short for my wife's name, Cecelia, who is most understanding and helpful during my construction tirades... "

Note this is a low resolution plan, enlarged from the RCM handbook. The text is readable. It would be good to replace this plan with a clearer scan, at some point. 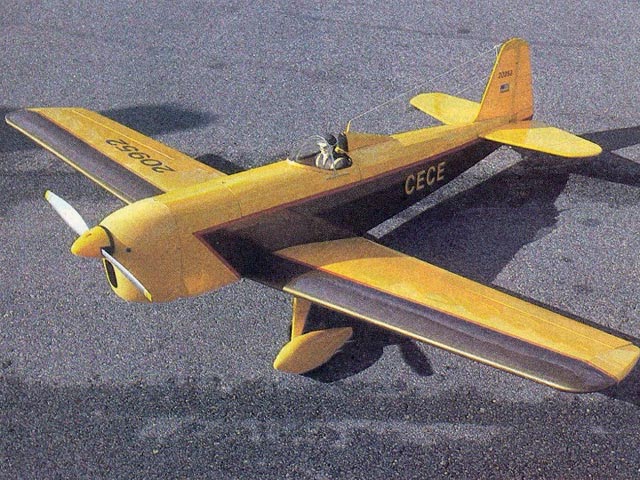