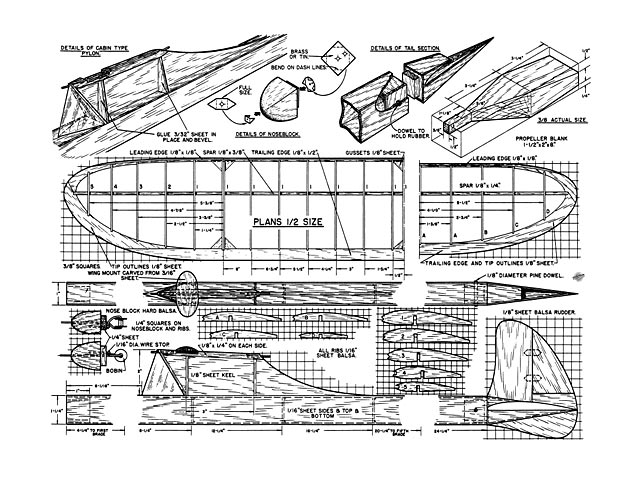 Quote: "With the return of rubber, we felt the need for a simple yet efficient stick model. Slim'n Sleek, by Paul Mueller.

HERE is a little ship that has excellent flying qualities, having been designed for both simplicity and lightness. An excellent flyer, this model should be next on - your list, especially if you're a rubber fiend. But enough buildup, on to the construction.

Fuselage and Propeller assembly: The fuselage is made by cut-ting four sides of 1/16 sheet 'c' cut balsa. Join the four sides as shown on plan to form the square tube. Fill in front and rear of the tube with 1/8 sheet balsa with grain running vertically. The rear fill-in is to support the dowel, the front fill-in is for strengthening the nose block. The tail components of the fuselage are cut from 1/16 sheet balsa and are glued together to form a long pyramid. Later it is glued in place at the rear of the tube. The pylon is put on by laying down the center keel and building up around it. Give entire fuselage a sanding with fine sandpaper, and cover.

Carve noseblock and attach propeller. Rubber tensioner is put on according to where you want the propeller to stop. The original propeller stopped on the right side of the fuselage. Fuselage and propeller assembly are now complete.

Wing and Tail: The wing is made in the conventional manner by laying down the spar and notched trailing edge. The leading edge is added after the ribs are glued in place. Tips are added last. When frame is dry, carve leading and trailing edges to required shape and sand the entire frame. Dihedril is then put in, the amount shown on plan. Wing is covered after dihedral is set. The stabilizer is made and covered in like manner except that no dihedral is required..." 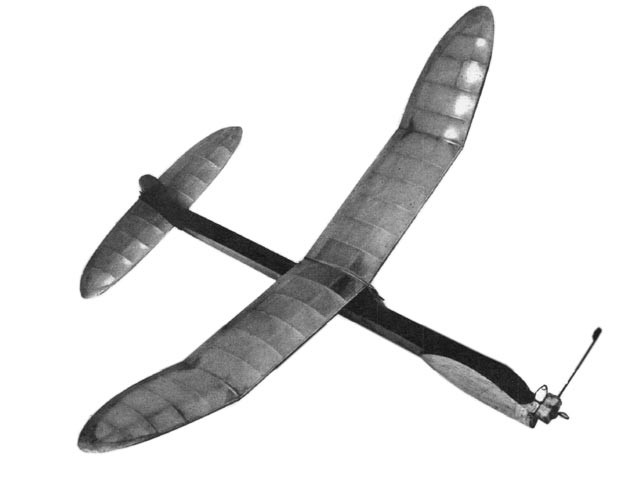