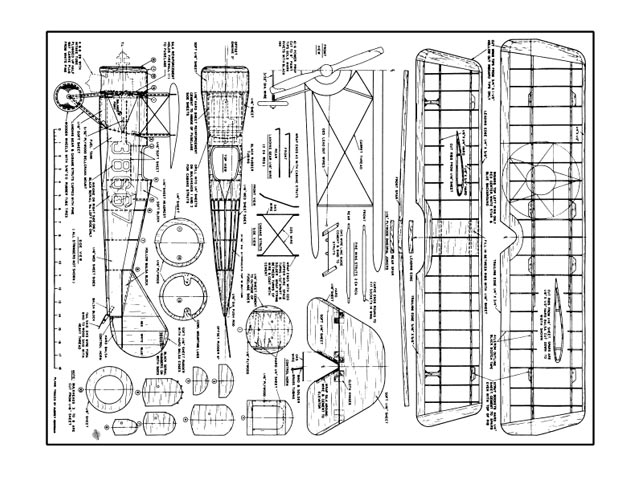 During 1917 and 1918 five hundred and fifty of these frisky little pursuits built in Ithaca, NY were delivered to US Signal Corps. The S-4C Thomas-Morse was fitted with an 80 hp LeRhone rotary giving it 95 mph speed.

The United States did not do very much in military aviation till the last two years of the First World War. At this time we were training pilots to fly the fast French scouts over German lines. Our Curtiss primary trainers were far behind these ships in speed and performance, and left a large gap between fighter pilot training and combat flying.

The 'Tommy' or Thomas-Morse Scout was designed to bridge this gap with high performance and maneuverability, but had less speed than the top-notch fighter planes. Large control surfaces combined with a lightweight airframe and engine gave the Tommy a good rate of climb and excellent maneuver-ability. Many of these ships were purchased by private owners after the war because of the small engine and resulting fuel economy.

The structure of this model Tommy was designed specifically to give good scale appearance. No spars show through on the wing and the ribs are of the correct number and spacing. A narrow leading edge and trailing edge are used so that they will not detract from the appearance. Wire struts for the upper wing and the landing gear wires are covered with white pine to duplicate the spruce struts on the original. Stringers are used in the correct locations and sheet balsa in the areas covered with aluminum.

On scale biplanes the top wing very often flips off at the first rough landing. The main problem is to attach the wing firmly to the fuselage so it will resist being driven back or twisted off by a force on one wing tip. Wooden struts are too brittle to resist this twisting action and fail very quickly. Wire struts are strong enough but very difficult to install using J bolts or binding with wire into plywood bulkheads.

Our little Tommy sports a new type of construction that is quite strong and yet can be installed after the wings and fuselage have been completely covered and finished. The ends of the struts are wrapped with evenly spaced turns of copper wire and lightly soldered. A piece of glue-covered string is then wrapped in between the turns of copper wire and allowed to dry. Upon final assembly the string is again coated with glue and pushed into a hole in the fuselage and wing. When the glue is thoroughly dry this joint will withstand thirty pounds pull or more and also resist side pressure. Note that the cabane struts have a steel wire brace (X) between them to withstand the twisting action from the top wing.

Careful attention has been given in designing the structure to main-tain proper balance. Note that the top wing on this model extends ahead of the firewall and nearly touches the propeller. In order to arrive at a correct balance with this forward wing position, the rear half of the fuselage and tail assembly must be kept extremely light. Also a large engine is used to add extra weight in the nose. The K&B 29 has double the power required but gives very steady performance with the intake plugged up halfway.

Notice in the weight table that the paper and paint job weighs 3-1/2 oz even though it was kept as light as possible for a good finish. The structure must be kept extremely light to overcome this extra weight. This is accomplished by using a 1/16 sheet balsa fuselage, hollow wing ribs, and radial motor mounts which eliminate heavy maple beam mounts. The stunt performance of the model compares well with the original ship.

The model has been put through consecutive inside loops, wing-overs, square loops and three and four leaf clovers. There is no tendency to mush regardless of how it is handled. We do not suggest inverted flying or outside loops.

Start construction with wings. Cut out a tin template to outside curve of rib and use this to slice 1/8 wide strips of sheet balsa. A separate template is required for top and bottom segments. Cut spars from hard 1/2 in sheet with a straight edge and pin down to plans. Glue one half of each rib in position and allow to dry. Turn the assembly over and attach the remaining half of each rib, then add the leading and trailing edge.

This wing assembly is much easier to build than it looks on paper. The ribs are very fast to cut out and require much less effort than cutting square slots in a one-piece rib. When making the bottom wing, splice the spars and leading edge together first..." 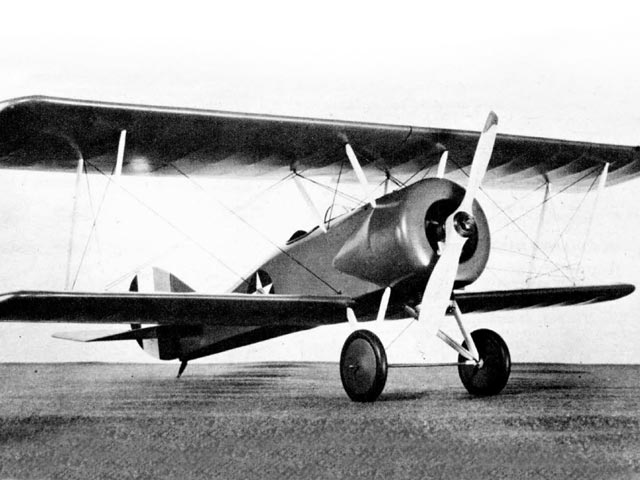