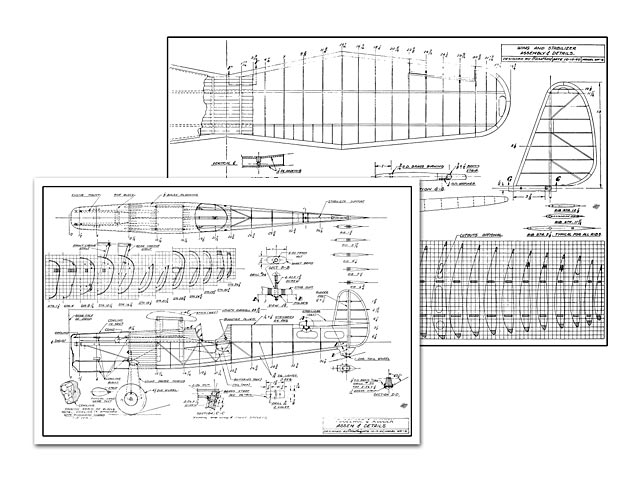 THE prototype of this model would come under the classification of a long-range scout bomber. Its long powerful engine, comparatively large wing and lengthy fuselage all give the impression of an airplane capable of cruising long distances and also being an effective striking arm for the US Navy.

The model itself is a stable, sturdily built flier and performs very well with a 1/5 hp engine. Not meant for contest work, it can be built lighter and become an extremely efficient contestant in model meets.

We tested this model a half dozen times before finally drawing the plans; each one was different from the preceding, and we expect to have many more flights. It flies like an airplane should; in great climbing circles and steady glides that are a revelation to watch. Built well, the model should last many seasons and be a continuous source of enjoyment to its owner.

READING THE PLANS: In general the plans are intended to convey a true picture of the various parts in their relation to each other. All locating dimensions can be derived from scaling the plans, and all sizes of longerons and other small parts will be given both in the manuscript and the plans. Note the stations of the fuselage are measured from zero point, which is the propellor hub rear face. The formers and bulkheads are drawn on a graph, each square of which equals a one-half-inch square on the full size model. To obtain the various formers and bulkheads, lay out a graph on scratch paper and draw in the station contours. The wing ribs are presented in the same manner. The rib stations are measured from the centerline, as are the rib stations of the stabilizer. The rudder and fin ribs are stationed from the top of the fin down.

If this method seems rather hit and miss, remember that in working with balsa wood, very close tolerances cannot be held. Variations of 1/32, 1/16 or even 1/4 inch in some cases are satisfactory, and can hardly affect the model's aerodynamic qualities except in case of too great a variance in the wing airfoil section. In presenting these plans it is taken for granted that you have already built at least one and probably two or three gas models. It should then be quite easy to grasp the construction of this model after a close examination of the plans and reading of the manuscript.

THE WING: Let us begin construction by building the wing first. It is in one piece, has two spars of hard balsa 1/4 in thick, and approximately 67 inches long. If you splice them, use three pieces and do not splice in the wing center section. The ribs are all 1/16 hard balsa except the two center ribs, which are of white pine and 1/4 in thick. Cut all the ribs out and make the cutouts for the spars and the lightening holes. All the ribs except the tip ones are assembled on the spars by slipping the spars into the 1/4 holes. Handle a half wing at a time, and on a layout of the plan form, pin this assembly and line tip the ribs as shown.

When all but the tip and two center section ones have been cemented on, put in the center ribs. These have the front and rear 1/4 OD aluminum tubing sockets bolted to them. A strip of brass is soldered to the aluminum tube with aluminum solder and bolted as indicated..." 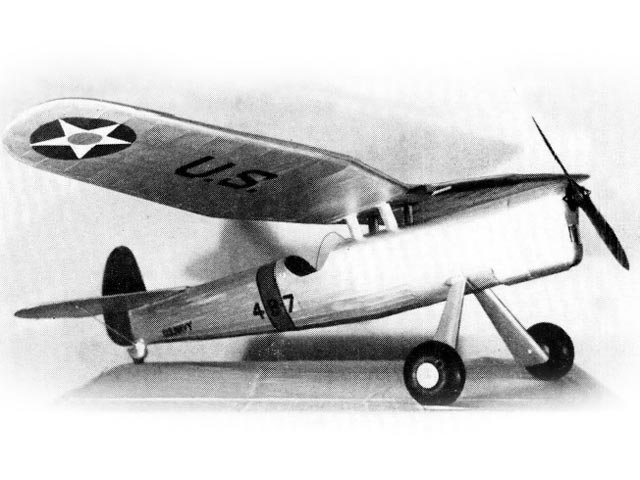