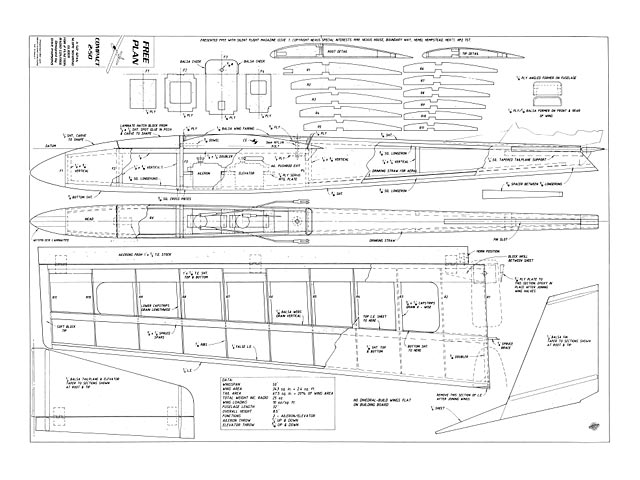 Turned out nice, he said. I turned round to acknowledge the greeting of the walker as he passed by on the cliff path. It has indeed I thought, as I observed my latest creation soar by on the strong lift 200 ft above the waves of the Bristol Channel. But I was thinking more about the flying characteristics of the model glider rather than the weather that day. A fresh South-Westerly breeze of about 15mph was blowing 'smack-on' to the twin bowls of Hunts Bay, just right for the first flight of the new design.

A few questions were waiting to be answered. Were the C of G calculations for the swept wing correct? A couple of clicks of down elevator trim to aid penetration showed it to be about right - maybe slightly nose heavy - that's nice for a change! and the slight nose down attitude as it accelerated was quite pleasing.

Now the next check, a little forward pressure on the elevator stick resulted in a long shallow dive down towards the sea was followed by the recov-ering climb on release of the down input showed the wing/tail incidences were correct and confirmed my suspicion that it was balanced slightly nose heavy and required a little up elevator in level flight. A loop was tried - no problem, then another followed a with faster entry speed and pulling really tight at the top - no flicking out, that's good.

Now a roll - not so good! Try it faster and this time across wind that's better. Full aileron stick deflection was required - give the servo something to do! Consecutive rolls now - comes with practice.

Next climb for height to try the stall, dead into wind, slow back pressure on the elevator stick, starts to nod a couple of times, but no sudden tip stall. Then one wing or the other starts to drop, you can pick it up with opposite aileron. A spin? No, full aileron and up elevator produces a fast spiral dive with instant cessation on centring the sticks. Inverted flight? Only just with that flat bottom wing section. Inverted stall? with full down elevator it just sat there doing nothing, then application of full aileron as well produced an inverted spiral dive. Outside loops? well not really, but Cubans and Immelmans are okay.

Being small and light the little glider is affected by the turbulence and wind eddies on the cliffs more so than would the bigger and heavier soarers, but it is not so small as to be 'twitchy'. It was designed to produce a compact size soarer, hence its name. Control is by two functions with a wing-span of 50 in, thus giving it the full title 'COMPACT 2-50'. Total weight including radio came to 24 ounces, giving a wing loading of about 10 oz/sq ft, and to date it has been flown in wind speeds from about 5 mph in good lift and up to 34 mph but with a slightly more nose down attitude..." 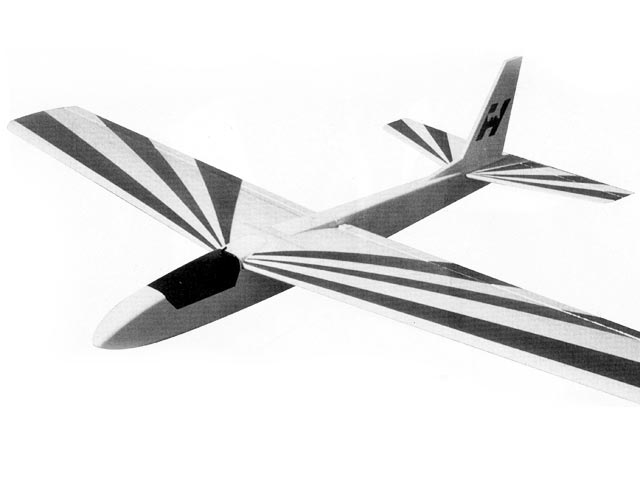