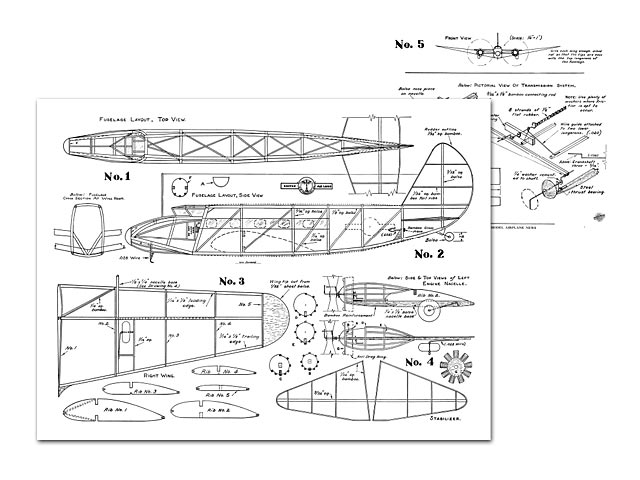 Quote: "How You Can Build a Flying Scale Boeing-247, by Wm H Durand.

A Unique Propeller Drive Makes This Modern Transport Model a Fine Flier and Interesting to Build.

You will find that Boeing's new, high speed twin motor transport, technically known as the 247, makes an unusually interesting model to build. This fast, modern ship with its three-mile-a-minute top speed and its low landing speed of 59 miles per hour is making history on America's air lines and is proving the superior speed, reliability and economy of the medium size transport plane.

The problem of applying power to the two outboard propellers in a flying model of the twin motor variety is solved in a unique manner in this design, which uses no unsightly motor sticks, expensive air or gas engines, nor the inefficient pulley transmission. The Boeing 247 model to be described here uses the crankshaft and connecting rod type of transmission which is very simple and cannot possibly slip. This transmission system is shown in detail on drawing number 5 which accompanies this article.

Besides being easy to construct, the new system makes winding and launching easy and does not spoil the appearance of the model since the moving connecting rod is a mere blur when the plane is in flight. There is very little vibration, only a slight buzz being audible when the transmission is in operation.

The model is very true to scale except that tail surface areas and dihedral have been increased in order to insure good flying qualities. Although this is not an extremely difficult model to build, it is not recommended for beginners.

Fuselage: It is convenient to begin the model by constructing the fuselage. Refer to drawings 1 and 2. Lay out the two fuselage sides flat in the usual manner, but disregard all diagonal braces except the heavier members that may be placed at a slant. Notice that the longerons are 1/8 square balsa while most of the uprights are 3/32 square balsa. It is a very easy matter to form the curved longeron in the nose tsf the fuselage; just press small dents into the balsa on the inner side of the curve with your thumbnail. Space these dents about 1/16 of an inch apart. This makes the wood very pliable, and it may easily be bent into the desired curve. This method is much quicker and easier than soaking or heating the balsa. After the entire fuselage has been assembled, these bent parts should be doped in order to re-store their original strength.

When both sides of the fuselage have been completed, lift them off the board on which you are working and proceed to give each of the uprights a curve similar to that shown in the cross section view in-draw-ing No.1. Use the same method as was used in forming the curve on the fuselage nose longeron; that is, by forming the wood between the fingers with the aid of your thumbnail. This gives the fuselage sides a rounded effect like that produced by cementing small bulkheads to the sides of a rectangular fuselage, only the new method is much less tedious as well as lighter. Just a word of caution - don't give both sides the same curve; make one right side and one left side.

Your next job is to join the sides with the top and bottom cross braces which are formed into a slight curve before cementing in place. You will notice on the plan that the tipper cross members are shorter than the lower ones.

Now you are ready to line up the structure and secure it by the addition of the 1/16 square diagonals shown in the plan. At this stage you may also place the 1/16 square stringers around the nose... " 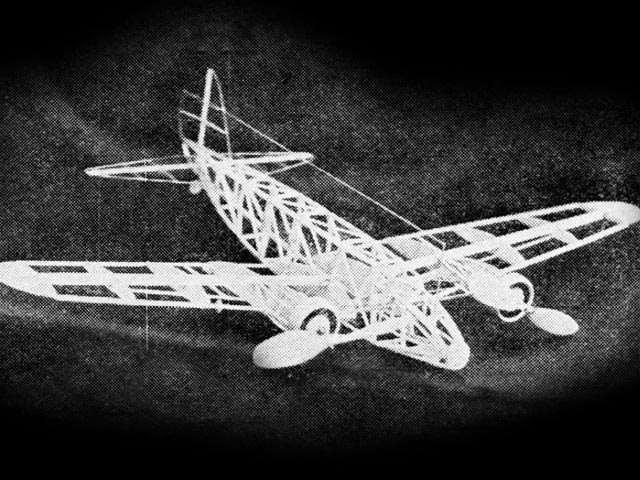