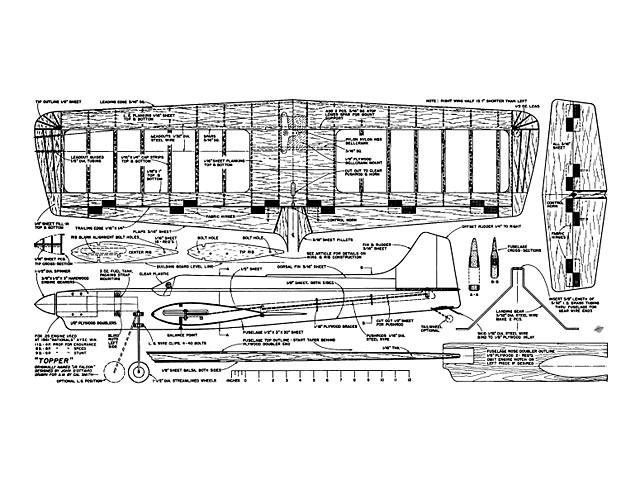 Quote: "John D'Ottavio, interested in modeling for over 25 years, has specialized in control-line stunt flying, winning many Eastern contests. His designs have been widely publicized and he is an active member of three NJ model clubs: Flyateers (Rich's Hobbytowne), Union MAC, and Garden State Circle Burners. As if this doesn't keep him busy enough, he also manages the Roxbury, NJ, Little League! The D'Ottavio's are another modeling family. The older boys, John, J. (14), Mickey (12), and Phil (8) are all sprouting model wings while a younger pair, Victor (4) and Donna (2), will soon join the fun.

D'Ottavio's design is a no-nonsense profile stunter. Its built-up wing has a thick symmetrical airfoil and flaps. Tails are sheet balsa. Fuselage is 1/2 in sheet with plywood and balsa doublers running full length. Control system is fully en-closed for cleanness. Power was a stock Fox .25, a year old at the time of the Nationals. Any engine up to allowable .35's can be used. Bearer spacing may mave to be changed if you shift to a different engine.

Wingspan is 37-in; length, 31-in; wing area, 350 sq in; weight, 28-oz. Fuel tank is a standard 3-oz wedge; spinner diameter is 1-1/2 in. Top-Flite and Tornado propellers in various sizes were employed for best performance in each flying phase. An 11D-4P prop was used for Endurance; 8D-8P for Speed; 9D-6P for Stunt. Fox Super fuel was in the tank.

Like to build 'Topper' for that 1962 AYSC competition? Good! Then read on. Construction starts with the wing since it must be completed before joining to the fuselage. Begin by cutting out the wing ribs. Make one center and one tip rib pattern from thin aluminum, heavy card stock, or 1/16 plywood from the outlines shown on the plan. Note the blank alignment bolt holes near leading and trailing edge. These should be accurately spotted to insure uniform taper of the ribs.

Cut 18 rib blanks from 1/16 sheet slightly oversize. Stack 9 blanks between the center and tip rib patterns, drill and bolt together with two 4-40 bolts. Carve and sand the blanks down flush with the patterns. Cut spar and LE notches. Repeat procedure to make ribs for the opposite wing half. Notch two center ribs for the 3/16 sq spar supports and cut out one center rib for bellcrank clearance. Also punch 1/4 in dia holes through left half wing ribs for the leadout wires. Locate the hole position by referring to the wing plan.

The right wing half is 1 in shorter than the left so the tip rib for this side should be discarded and a duplicate of the next to last rib made. This rib should be reduced slightly in outline to maintain taper. Since the wing is tapered it will be necessary to block up the tip ribs 3/32 in above plan and building surface. Cut a couple dozen scrap wedges to aid in blocking up spars and trailing edges during assembly..."