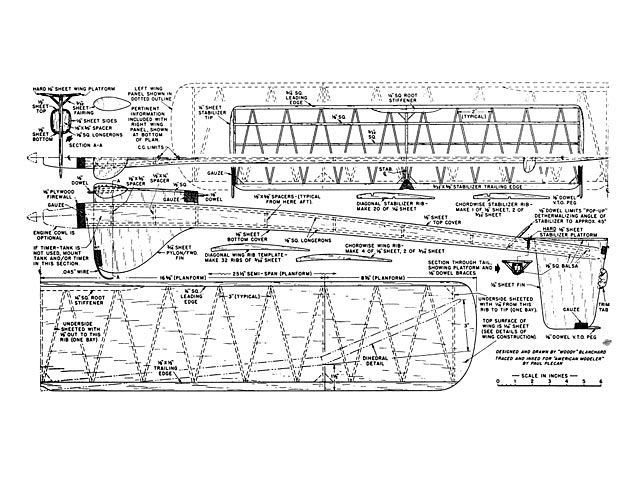 Quote: "Duzit. Semi-high thrust design to fit the new free flight rules and for flying with .049 or .051 power by USA's Champ-of-champs, NASA's Willard Blanchard. Read Woody's spirited defense of the new regs: the most intelligent rules changes since wing areas and cross-sectional areas went out the window.

Much has been said about the 1959-60 AMA free flight gas power loading. One comment heard frequently is that performance will suffer so seriously that interest will be lost in these classes. The author will go way out on a limb at this point and say that in his opinion, the new power loading is the most intelligent rules change since wing areas and cross-sectional areas went out the window.

Experts and old hands could handle the overpowered 'bombs' with reasonable consistency, but at any contest or get-together the mortality rate was unduly high among the models flown by the less experienced. This was a pretty unhealthy atmosphere as far as encouraging new enthusiasts to fly free-flight gas was con-cerned. Despite arguments that, for a given engine size, the increased mass of the model will result in more severe impacts, the upcoming contest season will show a sharp decline in the percentage of free-flight gas ships wrecked.

Those who have not flown FAI gas will be surprised to learn that perform-ance under the new rules can be very good. However, it will no longer be a matter of powering a feather so high that any reasonable sort of glide will result in a maximum flight. We'll be getting some very respectable altitude, but we'll have to fly fairly efficient airplanes to consistently get good flights. This means relatively low-drag configurations, and airfoil sections with respectable lift-to-drag ratios. This also means we should avoid extremely low-aspect-ratio wings (we can't go overboard here, however, since excessively high-aspect-ratio wings are structural problems, in addition to their built-in poor characteristics in gusty weather, due to very high lift-curve slopes). Further, a good all-around airplane should not have an extremely low wing-loading. Feathers make out fine under ideal conditions, but with gusty weather they're hard to keep in trim.

Cut fuselage sides, vertical tail, and pylon/fin to shape. Join sides with tail, pylon and spacers sandwiched between. Add plywood firewall and top and bottom sheet covers. Carve and sand fuselage to an elliptical cross-section, and the pylon and tail to airfoil sections. Add the wing platform, fairings, dowels and tail hold-down hook..." 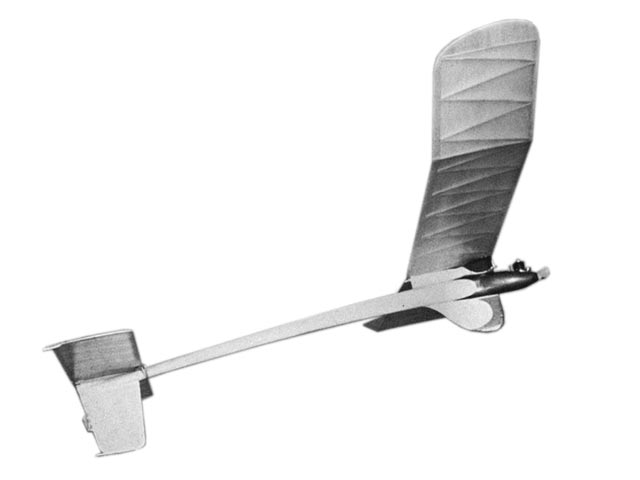