Quote: "Kit Preview: PAA Master. In accordance with the new PAA-Load Half-A ruling requiring a four-ounce dummy occupant, Jasco has brought out the PAA Master, a new free flight model which is an improved version of Frank Ehling's model that placed first in the 1951 Nationals at Dallas, Texas.

The PAA Master is designed strictly for the PAA Load Event and must always be flown with the dummy, otherwise it will be out of trim. Most of the design effort was put into getting as low a sinking speed as possible. The glide is slow and flat, and the model floats with apparent ease.

The low sinking speed was obtained by a combination of streamlining and increasing the wing area. The fuselage was made as slim as possible with a short streamline pylon type of cabin for minimum 'wetted' area. Increasing the wing area meant a lighter wing loading and the ratio of wing lift to fuselage drag improved. A pointed leading edge is used in the wing to reduce the profile drag.

A well-broken-in engine should be used, because there is generally a difference of two to four thousand rpm's between a new engine and one that is broken-in correctly. An engine is considered broken in when it will hold its peak rpm's without a falter.

A 5-1/2 x 4 or a 6 x 3 propeller should be selected. It is very important to have the propeller balanced to get best performance. Otherwise there is a lot of vibration and the fuel may get full of air bubbles. Balancing a prop is easy. Insert a dowel in the propeller and place the propeller between two razors. Scrape the heavier end of the propeller with a razor until the propeller is balanced." 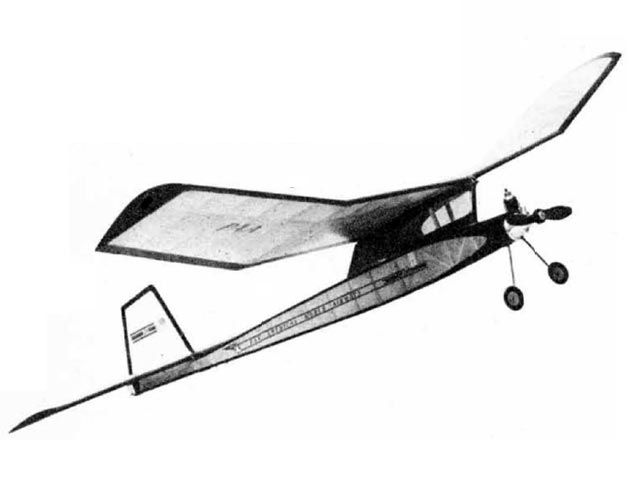