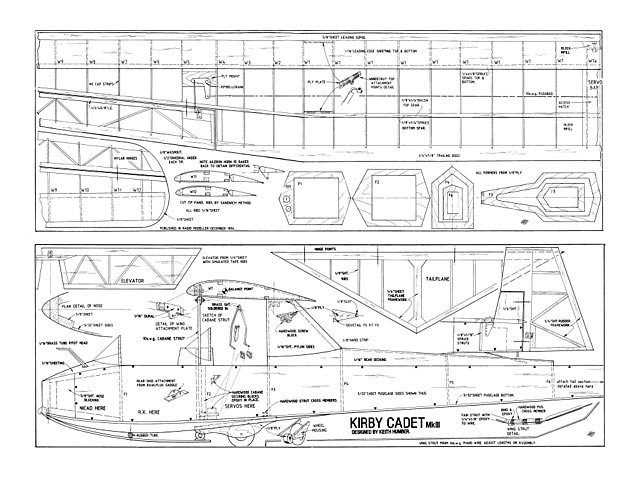 Quote: "Latest in a series of miniature scale R/C soarers - and the best yet! Kirby Cadet Mk3 Tandem Tutor, by Keith Humber.

The Kirby Tandem Tutor is, as the name suggests, a two seat version of the Mk2 (See my full-size plans in the June/July issue of sister magazine Silent Flight). The wing is identical but maintained on a front cabane and rear pylon with a small amount of scale dihedral. It is longer than the single seater and is ideal as a model. My model is the best flying of all three of the Mini Slingsby's in the Cadet series (the Mid full-size plan was published in RM November '92). In fact it is nearly as good any my Mini Eagle III (oz164) (RM September '91). She will slow right down to almost a hover and is really quite efficient, thermalling with the best of them.

Let's build! Constructionally she is, of course, very similar to the single seaters. The cabane wing mounting is the only real difference. The fuselage is built up from 3/32 basic sheet sides on 1/8 ply formers and 1/16 sheet rear top fuselage decking with 3/32 bottom sheeting. The cabane struts are best formed from bent 10 swg piano wire as per the drawing (use the side elevation for length). The cabane is fixed with shaped hardwood blocks and two triangular gusset pieces well epoxied in position. The top fixing is a small piece of brass shaped and drilled for the wing 3 mm bolt and well soldered in position with a hot soldering iron.

The wing has a 1/16 dural shaped plate baked to a backing piece epoxied into the wing. When mounting the wing for the first time, carefully adjust the incidences and, men finality satisfied, glue the dural mounting into position. The rear wing fix is a wood screw into a hardwood block in the rear pylon. The fuselage nose is blocked in with 3/8 sheet pieces top and bottom to the plan view and epoxied in position. The fuselage sides are steamed to curve and glued in position. The nose curvature is then completed with 3/8 sheet carved and sanded to shape.

The skid is cut from old plastic curtain track though 1/16 ply would be just as good. The dummy front fixing is 1/8 ply, and rubber thick wall tube is used as the shock absorber. A shoe from a 3 mm Rawlplug toggle bolt is pressed into service to fix same - it's cheap and looks the part. The wheel mounting plates are 1/8in ply with a 3mm bolt spindle (cut into the fuselage bottom after sheeting bottom with 3/32 in epoxied in place).

Wing: The wing is literally the same as the Mk2 but with 1/2 in dihedral under each tip (so if you still have a Mk2 wing with dihedral, why not upgrade into a Tutor?). 1/8 in washout at tip trailing edges is needed. This model does need a mini servo mounted in the wing centre section and I used a Hitec 101 which goes in well. The aileron horns are raked back to achieve differential (approx 1/4 in rake back).

The 16 gauge strutwires are just as the earlier models ie bound and glued to 1/4 x 1/4 in spruce cross - members and fixed permanently to the fuselage. Use the drawing for a rough guide when forming them and resort to constant checking for length and fit, being careful not to twist the wing - so get the lengths right. Struts are faired with 1/16 x 1/4 in spruce/streamline section and epoxied to the wire retained at the wing with wheel collets.

Tail feathers and finishing touches: The tail group on this model is built up using 1/4 x 3/8 approx sections (cut from 1/4 in sheet) and all surfaces are hinged with mylar tape pinned and super glued into position. The servos are positioned in the rear cockpit with the receiver in the front with the pilot sitting on same while the Nicad is located in nose. Even so, about 2 oz of lead was still needed in nose, so watch the rear weights.

I covered with Solartex and sprayed with Toyota No2 silver from Halfords. The struts are cross braced with thread glued into position - purely a scale decoration but it looks good.

Airborne: Flyingwise this one is a honey, especially with coupled ailerons and rudder - I used a Y lead. Check the rudder and ailerons have the correct relationship and that the CG is well forward and pick a day with wind strength about 2 to 4. She is really easy to fly and certainly represents a good first scale model that's also very easy to build. I think she looks a picture in Air Training Corps colours - just the part on a low fly by.

Finally, once again thanks to my wife Margaret for the flying photos; they're getting better all the time. Now what about that new radio Margaret! Happy landings." 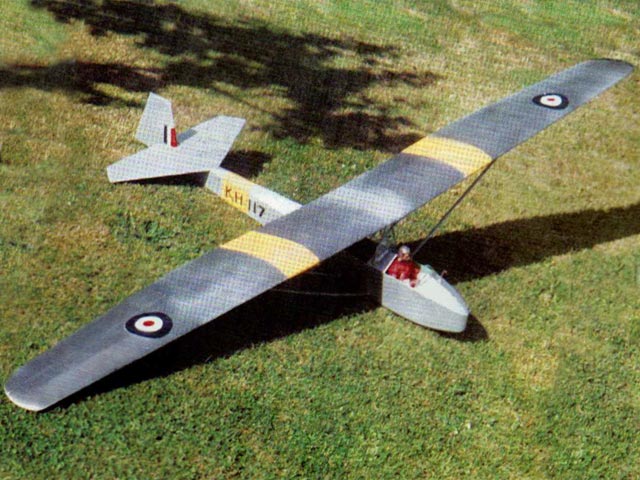