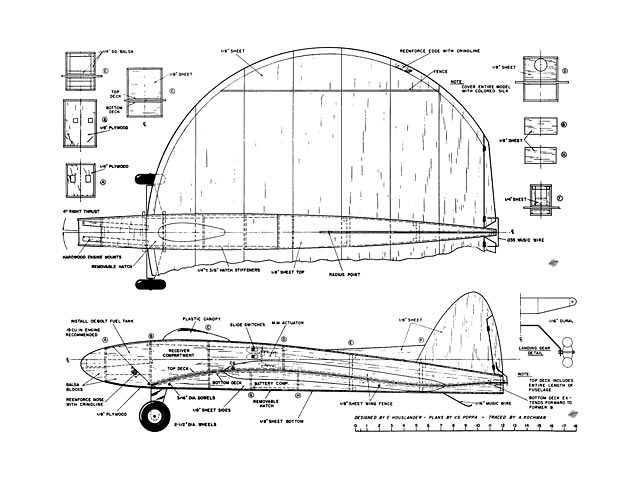 Plato is the third of a series of saucer designs employing the reflex wing section. I had used the section with some success on a Wakefield type fuselage model way back when. But for radio control and 'minus dihedral' this was something else again. In order to bolster my courage, a series of tests were conducted with sheet balsa gliders of all shapes and sizes. These tests proved that the reflex is a remarkably stable method of obtaining lift. Still to be answered, however, was the question of scale effect when enlarged, higher wing loadings, and the necessary ruggedness for radio control.

Plato I was a 24 in saucer, high wing design with the motor mounted above the wing on an extension of the rudder, 6 in back from the leading edge. It was underpowered with an .074 diesel, so an .09 was installed. This proved adequate to get it up there but it was simply too groovey. It would fight a turn and use up about 250 feet in a circle. I've laid this one aside for future use from my rocking chair.

About this time the Pee Wee .020 motor came out and provided the inspiration for Plato II, an 18 in saucer. It was a high wing design but this time the engine was in its normal position in the fuselage. The weight, 14 oz overall, made the wing loading a little high, but it was much more nimble than Plato I.

The first two designs proved the efficiency and strength of the reflex section. It remained to improve the serviceability and simplify the construction so that it could be built with the minimum amount of time and effort.

To achieve this, Plato III was built. The wing was lowered and a hatch pro-vided on the top of the fuselage for easy access to the receiver and actuator. This was done with some trepidation as to its effect on stability. There was no need to worry however, as it had little effect on the flight characteristics. In addition, ground handling was much improved - take-offs as straight as an arrow and those greased landings without nose overs that are typical with low wing designs.

The fuselage is composed of a top and bottom deck. The wing, a 30 inch disk of 1/8 thick sheet balsa, is sandwiched between the two, giving it its peculiar curve that imparts the necessary rigidity in flight. The fuselage sides are made by transferring the outline from the plan onto a sheet of 1/8 balsa. Then trace only the curve which is identified as the top deck line onto the balsa sheet. This line extends from the tail end to 'B' and down to the bottom edge. After cutting and sanding the outline, carefully cut along the top deck line. If this is done accurately in one continuous cut, the 1/8 notch for the wing is provided by simply cutting 1/8 off the bottom of the lower deck with a straight edge. Using the two pieces as templates, make two for the other side of the fuselage.

This is a good time to make the four pieces for the fences out of hard 1/8 sheet balsa using the fuselage sides to draw the wing section curves. Shape the bulkheads and assemble the top and bottom decks separately. Note that the planking along the top deck line is on the inside and flush with this edge, and the same applies to the planking along the bottom deck line.

At this stage it's a good idea to get on with the wing. Select the harder balsa sheets that you have for the leading edge. Double glue all butt joints to insure strength and a smooth contour when the sheets are curved. You should now have a panel approximately 30 inches square. Draw a center line on both sides running 90° to the grain of the wood and the butt joints..."

Note the Plato design was also later reprinted in MB, June 1983. This was just a straight (ripped off?) copy of the original plan drawing, along with a copy of the original AM article text. See supplement file below for scan of this plan. Although scanned at 150 dpi in greyscale, this may be a clearer version to read than our main planfile here, from original magazine page scan. Thanks to Modellismo for hosting the MB scan.

Note also see pages (in Italian) on the Modellismo site https://www.edimodel.it/122-vecchiedia.html for some great photos of an enlarged version of the Plato design. Many thanks to Pit for this link.

Article pages, thanks to RFJ.
Alternate plan scan (from MB). 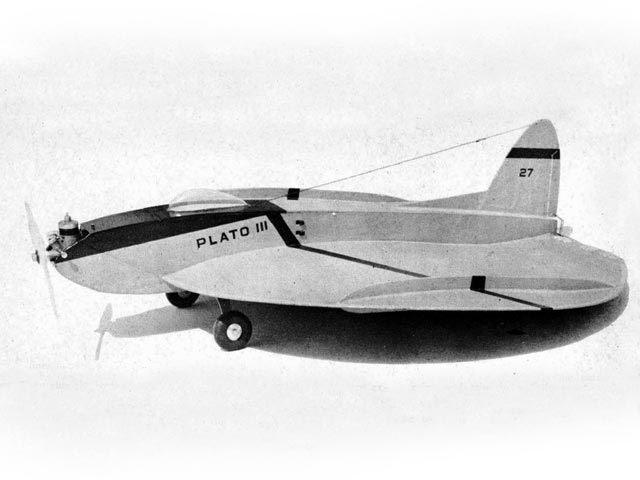