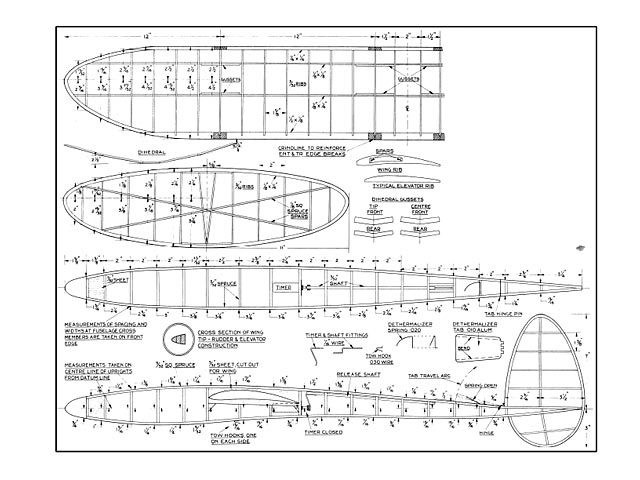 Spruce Up. Towline glider model. Wartime model designed to use spruce rather than balsa.

Quote: "WHEN balsa first began to get scarce, I started to experiment with pine and spruce on rubber and gas models. I soon found that rubber was getting almost as scarce as balsa and in the very near future would be impossible to get ; and gas models were too large and expensive for the mistakes that were bound to come. The tow-line glider, which had been the sport job at the ball park, soon began to be the guinea pig for hardwood construction. We proved that a towline could be just as much fun as the expensive contest jobs which took two and three times as long to construct.

This glider is the result of constant experimentation in both construction details and efficiency. The glide is far above the average. When adjusted, no trouble was experienced in towing. We believe that is due to the flat-shaped fuselage with tow hooks on the side. This model took less than a week to build, working on it each evening.

The first step in construction is to draw the plans to full, size and get the pine and spruce strips cut to the sizes shown on the drawing. Then lay the fuselage out. Here is a very simple and quick way. Place the top longerons out first, both together. Then place two pins on the right hand side of where the upright should be. Take two sticks, put. glue on one and place both up against the pins and the top longerons. Then cut both to the right length with a razor blade. Repeat the process until you have all the uprights in place. When this is completed, go along and put glue on the lower end of each upright. Then all you have to do is to pin both bottom longerons up against the uprights and the job is completed. I built five fuselages in one evening with this method.

When dry, glue in first all the cross braces which are the same size. There are six which are the same size under the wing. When they are dry enough, glue the tail end together and the first cross brace at the nose. Then it is just a matter of cutting and gluing as the curves come. Be sure all joints have a good fillet around them. Be especially sure that the gussets on the wing platform are glued well, for if they are not they will come apart under shock. The glue should be thinner than you usually use On balsa. If it is too thick the joints will not be as strong as they could be.

Installation of the dethermalizer is a simple job. Use an Austin or some similar timer mounted on stiff back ; this is glued in back of the cross braces with the knob toward the rear. An arm bent from 1/16 music wire is soldered to the lug which fits between the jam nut and the knob. When this is installed add two .strips, one on each side of the arms, so that when the fuselage is covered only a .small slot will be uncovered. The fuselage has two doors : one over the timer knob to adjust the timer and one at the nose for weight..." 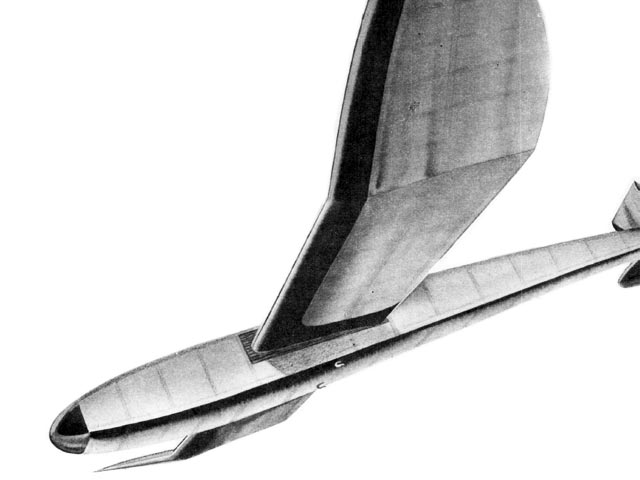