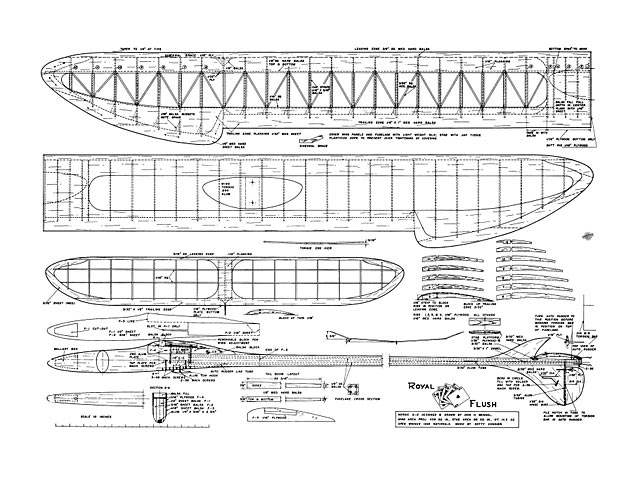 Quote: "You don't have to take our word for it that this towliner is a winner. Just check the results of the last National competition, where the design captured top honors in the Open category. Royal Flush, by Don Wensel.

Test flying and competing in somewhat less than optimum weather, the 'Ohio gang' perfected a reliable, rugged towline glider that works well under a variety of meet conditions.

The 'Royal Flush' is the end results of a design first developed in 1957. The model at that time had a 73 in span developed primarily for windy weather (usually prevalent at contest time in the Ohio area) with strong construction. This design, dubbed the 'Top Hat' by Bob Wuchnic, one of our club members, became one of the best A-2 windy weather models in this part of the country. Its contest record, an enviable one, was established by my brother Bob, Bob Wuchnic, Dan Gunning and myself in the Open Division and Larry Miller in the Senior class. In many A-2 events it was a struggle to get in the first three planes flying against other Top Hat models. Top Hats have won the Junior Air Races both in the Senior and Open divisions. It was first in Senior at the 1964 Nationals and third in Senior at the 1963 Nationals. Both National places being by Larry Miller.

During this period we encountered contests with very calm conditions mixed with light breezes and the Top Hats just didn't have the soaring abili-ties of some others. Early in 1961, I started refining the design to achieve a good gliding model and one that would also handle Ohio winds. The Royal Flush is a highly refined Top Hat with span increased to 81 in, a longer moment arm, an MVA 301 and Ritz combined airfoil section replacing the NACA 6409. The fuselage was thinned and a different rudder and stabilizer grouping employed along with screw adjustments, torsion bar, auto rudder and adjustable tow hook.

Basic wing layout was continued with increased aspect ratio. The wing's polyhedral sections have been a major factor in the winning performance of both the Top Hat and the Royal Flush. The wingtips, dubbed thermal hooks, serve as spin guards. You may have seen A-2s gliding along beautifully when suddenly the glide starts to tighten; eventually the model starts to spin and usually ends up with considerable damage. This is due chiefly to incidence settings being too low and an improper center of gravity. The Royal Flush wingtips prevent this. As the speed of the model builds in a tight turn, the large poly panel provides more lift, acting similar to a landing flap to hold the down panel up, thus preventing a spin and produces more bouyancy in the glide. I have used this wing type on models from 1/2A to FAI power and Wakefield with great success. None of those have ever spun in.

Royal Flush proved itself in 1961 when it captured first at the Cleveland Society of Model Aeronautics'' invita-tional FAI meet and repeated at the same meet in 1962. In 1963 along with a string of wins, it was a member of the Canton, Ohio, team winning first place in the inter-city invitational meet. But it was here that the prototype Royal Flush met a disastrous fate..." 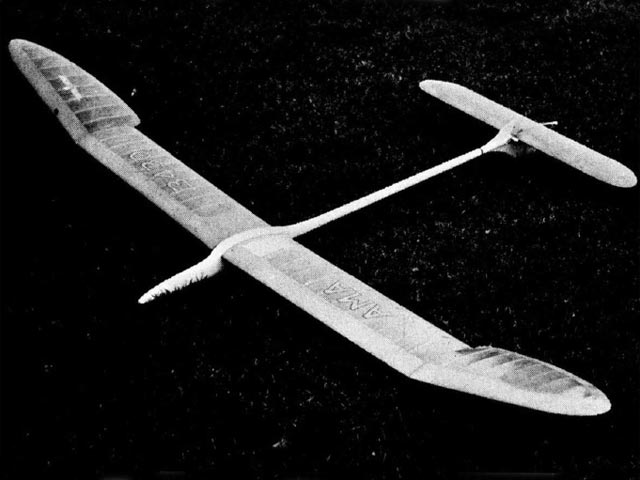 Is there any advantage on trailing edge discontinuities in aerodynamic terms as in this example or is is it aesthetics only? This is not uncommon, it can be seen for instance on several of Frank Zaic Thermic gliders - seven of them in Outerzone :-) - or Dave Thornburgh's Bird of Time - in Oz as well of course. These are the ones I remember off the top of my head but I'm sure there are more.
Miguel - 27/09/2019
Dave Thornburg (Bird of Time) alludes there is less vortex generation at the dihedral break.
JimHales - 28/09/2019
Many thanks Jim, as nothing was ever wrong with the Bird of Time then there may be a grain of truth in that :-) As I don't have a wind tunnel nor any fluid dynamics simulation software I'll have to let this particular fish get away.
Miguel - 01/10/2019
Add a comment