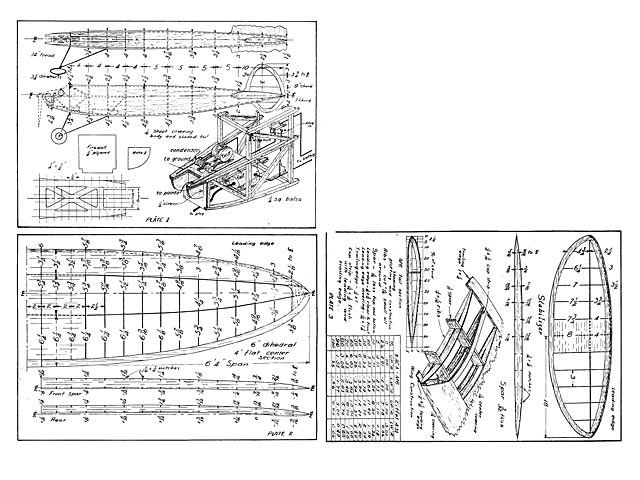 Quote: "Presenting another champion, trophy winner at the Mississippi Valley Contest - a ship of ultra modern design that traveled 100 miles on its winning flight - the 22nd Air Trails Trophy Winner.

By Roy Marquardt, in collaboration with Gordon S Light.

THE day of the outdoor events of the Mississippi Valley Contest dawned clear and hot. Our own Burlington, Iowa, group had camped at the Parks Airport in East St Louis in order to be first on the scene. But we weren't. It was hardly dawn before we heard winders turning and motors popping. After telling the world what we thought of people who disturbed such wonderful dreams of trophies and cross-country flights, we proceeded to add to the din in a more orthodox manner.

An unusually large number of contestants kept the meet from getting under way until 11 am. Soon after, Riser Rider was ready for a flight with 3-1/2 sixteenths of an ounce of gas in the tank. A few seconds later she was high in the air. The motor cut at about 3 minutes, the nose seemed hardly to dip - it was already on a riser. Roads from the airport toward the Mississippi seemed to have a terrifying ability to end abruptly, but finally one went through, and 23 minutes after launching, we stood on the Mississippi levee and watched the model disappear over downtown St Louis.

Fortunately the model carried my name and address and two days later it was reported found 30 miles away, 9 miles on the other side of the city limits of St Louis. Judging by wind velocity, the model was in the air at least 4 hours after we lost it and must have traveled 100 miles in a straight line - all on less than 1/4 ounce of gas - representing a fuel consumption of 51,000 miles per gallon.

Although very easy to build, the model incorporates several new features. The wing and tail are double elliptical, combining beauty and the most efficient outline known. A new method of construction makes it unnecessary to plot all the ribs individually. Fuselage is extra sturdy. An elliptical cross-section would have less drag, but ease of construction and the addition of lift and stability from the duck-shaped tail more than counteract this. Low speed, high thrust line, fuselage shape and the split rudder tend to produce a much more stable combination than the usual contest model.

WING: Plot a 16 Eiffel 431 from the co-ordinates on Plate 3. The ribs themselves are 1/16 smaller than this all around. Transfer to thin metal and cut out. Ribs are cut like ribs for indoor models - from a 1/16 x 16 x 12 sheet made by gluing 2 widths together. Place template on wood and cut around the top edge only. Move template down 1/4 in and repeat until the required number of strips have keen cut. Then turn the template over and repeat, using the bottom edge as the cutting edge. Cut from the rear to the proper length. Cut front and rear of the strips so that top and bottom join perfectly. Rear should be 1/8 high as it hits the trailing edge. Glue up ribs and make a 1/16 in notch in the nose for the leading edge, 7/16 deep.

Draw a full-size pattern for the wing half. Draw a center line and plot the leading edge as shown by the outside dimensions. Then plot in spars and trailing edge. The spar patterns should be on a separate sheet. The spar heights given are sufficient to plot accurately, but if more accuracy is desired, the metal rib template may be placed over a line parallel to the rib line on the plans at the point desired so that the nose of template is centered on the line. Move the rear of the template so that top edge hits the line just at the trailing edge of the wing. Draw around it. Move the rib template up so that the bottom meets the line at the same point and draw around. This is full-wing size and spars should be 1/16 smaller than this at top and bottom. Cut spars from 1/8 hard balsa sheet. Cut 1/16 x 1/4 notches for the ribs.

The trailing edge is formed from 1/4 x 1 strips. Place strip over the pattern parallel to the center line, and starting at the middle cut around the outside. Glue the piece just cut off on the inside at the same distance out. Repeat until the grain cuts across too sharply, then turn the strip until it is tangent to the curve and cut a new angle..." 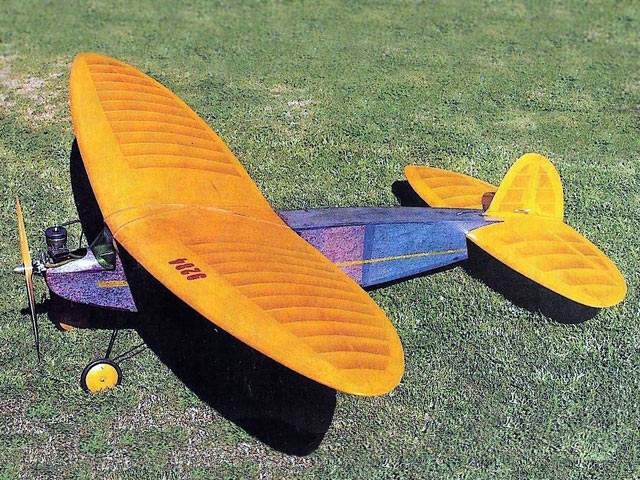 These plans left a lot to the discretion of the builder. The purple and orange one, with the high compression Anderson Spitfire, belonged to Ned Nevels of Napa, CA. The monokoted one belong to the late Joe Percy, a dentist from Texas.
Claude Williamson - 04/08/2022
Add a comment