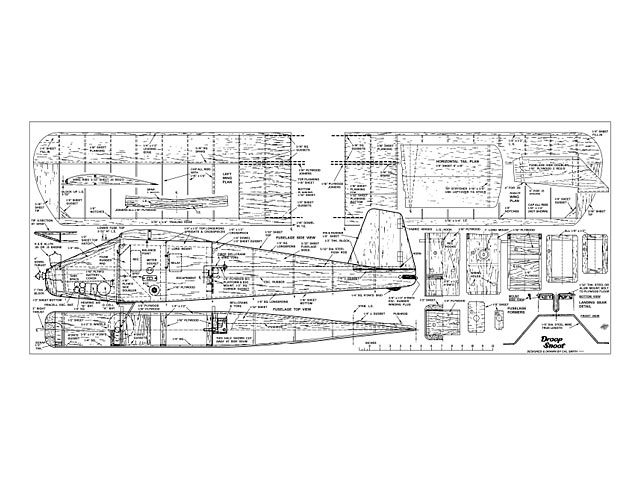 Quote: "Droop Snoot was designed with the beginner in R/C very much in mind. No fancy fillets or round stringered fuselages here, just the essentials. There is ample room for all simple single-control R/C installations. All wood sizes are readily obtainable at your hobby store and the box-type fuselage is easily built. This structure is very strong and will allow for considerable pilot error. The original model hit a parked car on its maiden flight - total damage, a broken prop.

Droop Snoot makes an excellent R/C beginner's model when powered with an 09 engine. Performance will be a bit tamer than the original model which was powered with the K&B-Allyn 15. With the 15 engine the model tears around the sky at a fine clip that should satisfy even the contest-goer.

The model could be built lighter but the additional weight of the structure adds considerable strength since hard balsa was used throughout. This is an important point to remember when purchasing the materials for any radio model. Select medium-hard or hard balsa and birch plywood rather than mahogany if available.

There are two important notes on the plans which should be considered before beginning construction. The fuselage side view shows the engine mounted with 4 degrees downthrust. This will be ade-quate for an 09 engine but a 15 engine will require more downthrust. The plywood side doubler pattern shows firewall angle for both engines so select proper angle for engine you intend to use.

The other note pertains to angle of incidence of the wing. The angle shown produced more nose-up tendency than was desirable. The wing incidence angle should be reduced by lowering the fuse-lage top 3/32 at leading edge, leaving the fuselage the same height at the trail-ing edge shown on the plans.

These two changes are not just arbitrary, they have been proven out in numerous test flights.

Construction can be started with the fuselage. If obtainable use 6 in wide 3/32 sheet for the fuselage sides. If not available, cement 3 in wide sheets together along edge. Pin down on a smooth flat surface to dry. True up one long side of the 6 wide sheet. Most sheets are a bit warped so one edge should be trimmed straight with a plane or razor cut along a steel straight edge.

Mark the position of all formers on the inside surfaces of the sheet in pencil. To do this hold edge over plan side view. Draw former positions across sheet with a square held against the true edge. Lay other fuselage side against first marked and transfer marks to second side. Draw across sheet as before. Cut outlines of fuselage side as shown on side view. Do this to one side then match up other side and mark it for cutting using the first side as a pattern. This method insures identical sides.

Beginning at former #3 cement 1/4 x 1/2 in top longerons and uprights to inside of fuselage sides. Position accurately along former position lines. Though not shown on plans, cement 3/32 or 1/8 sq uprights at former positions 5, 6, 7, and 8 to act as guides and gussets for these formers. Also cement 1/8 sq longerons to top and bottom edges of fuselage rear. While fuselage side assemblies are drying, cut out the 1/16 plywood side doublers for the front end. Use first cut as a pattern for second to insure uniformity. Glue plywood doublers to fuselage sides with hard glue instead of cement. Use Weld-wood or Elmer's Glue-All. Cement 1/16 x 1/2 in strip above doublers then 3/4 x 1/2 in upright at former 2.

Make all formers. Cut plywood firewall 1 and lower part of former 2 to identical width. Cut 1/8 plywood landing gear platform to same width. Formers 3 and 4 should be same width; note that top portion of former 4 is 1/16 plywood while bottom part is plywood. This forms escapement mount.

Study the plans and former drawings carefully so you can make provision for installing the radio equipment you have. Formers should be fitted out now for radio parts before they are assembled to the fuselage sides. Radio installation shown is typical for single-control setup. We prefer to separate heavy components to minimize crash damage. The receiver is the Lorenz two-tuber assembled from an Ace kit..."

Update 02/06/2021: Replaced this plan with a clearer version (redrawn from scratch) thanks to TonyP. 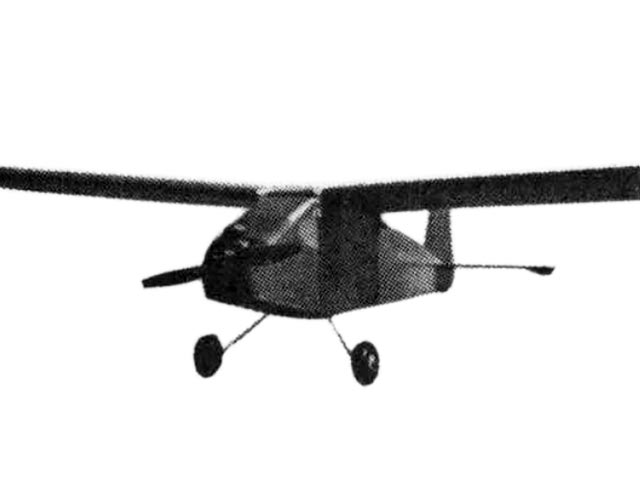