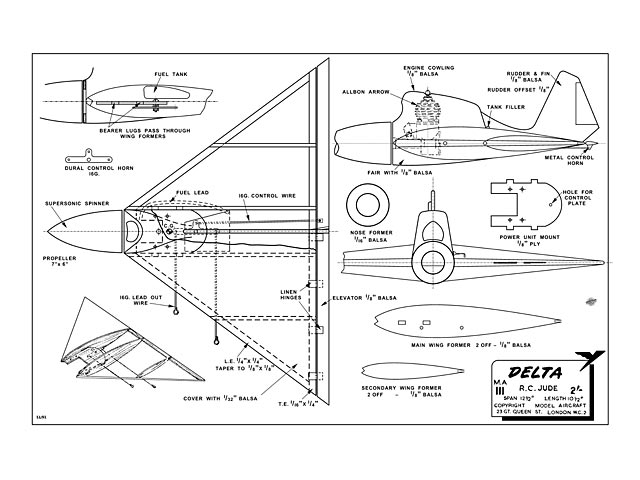 Quote: "THE first model was built to test out the possibilities of the Delta triangular wing type aeroplane, it proved to be a most satisfactory model with a very good turn of speed. Both the United States of America and the United Kingdom are at the present time carrying out full scale research on this form of wing and the very few that have so far been constructed have shown the following peculiarities: (1) A very unusual take off and landing attitude; (2) some difficulty with fore and aft control at low speeds.

On the original model the first mentioned only was apparent, for the model required an angle of attack of some 30, before leaving the take-off dolly. The fore and aft control is as was expected, smooth but quite sensitive.

Delta is classified as a super sports model, for it is fast and on 40 ft lines will reach almost 70 mph. It will also carry out all the usual stunts, although the small diameter of the loop must be seen to be believed!

There is little doubt that with a thinner wing section, a side mounted power unit, and careful fairing, a very high speed model would result. In the writer's case time is indeed a problem so the design and future development is herewith handed on to those who are more fortunate in this respect.

Construction: Cut out power unit mount to shape indicated or if necessary modify to suit engine used. The outside edges must be parallel since this ply member forms the basis for construction of the complete model. Cut out the required number of main wing formers as per diagram, insert engine mount lugs through the formers. Cement the 1/4 x 1/16 trailing edge into position, check assembly to see that trailing edge is parallel to engine mount. Shape and attach leading edges. Cement secondary wing formers to indicated position. Up to this point the model will haVe little strength and should be treated with clue respect. Cut out and fix control assembly to underside of engine mount. Dural was used on the original model but plywood will do just as well. Drill leading edge, shape, fit and solder lead wires and elevator shaft.

Cover complete underside of model with 1/32nd sheet balsa with the grain running across the model. Leave a small space beneath the engine mount until engine mounting bolts have been attached.

Assemble and fit tank and fuel lead. Mount power unit. Shape circular former to size of spinner and attach to the front of the model. Cover top surface of model with 1/32nd sheet, bringing covering as close as is possible around the cylinder so that exhaust fluid will blow back along top surface of wing.

Shape and mount front and sides of cowl the attach top, sand to required form. Cut out fin and rudder.

On the prototypes three lugs were left on the base of this unit and were inserted through to top covering; cement well.

Prepare elevator and hinge into position, attach control horn, add elevator shaft, making certain that there is not less than 35° upward and downward movement. It will be seen that one-eighth of an inch off-set on the rudder is recommended. It was found that anything in excess of this figure caused the model to crab badly.

Do not bring rear edges of cowl flush but leave a gap of 1/4 in on either side of backbone fin. Fair in underside of spinner extension with 1/8 balsa.

A great deal has already been printed concerning take-off dollies so it will suffice if it be said that a normal type three-wheel dolly was used with every satisfaction. Cover complete model with tissue and dope to required colour. The original was finished in gold and looked extremely smart. At first a normal type spinner was fitted, but the model was slightly tail heavy, the added forward weight of the supersonic spinner cured this trouble.

Flying: In the air the model handles in an orthodox manner. The take-off and landing' is, however, unusual. In the case of the former, allow model to gain plenty of speed with neutral control then apply quickly, but smoothly, about half up elevator. The model then appears to pause briefly at an angle of some 30° before climbing smoothly away from the dolly; ease with care into level flight. To make a slow landing bring the model in low, ease on up control a little more rapidly than with an orthodox model, the nose will attain a similar attitude to that of take-off and Delta will gently mush on to the ground. "

Quote: "Hi Steve & Mary, Here is another little delta from the 1950s, this time a C/L model from Model Aircraft magazine. Cheers,"

Update 03/03/2020: Replaced this plan with a clearer copy (patterned background removed) thanks to TonyP. 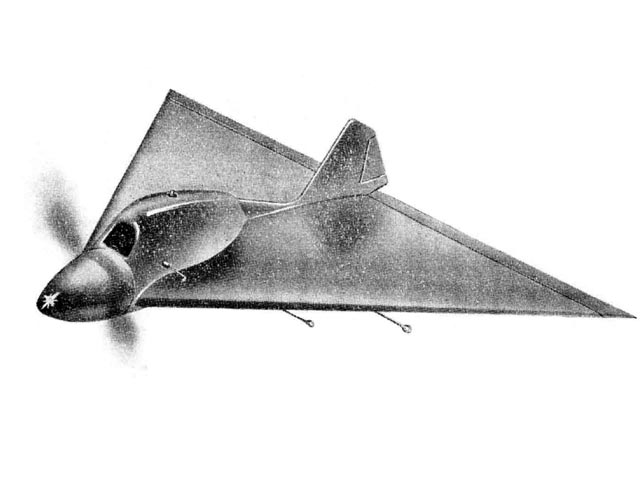