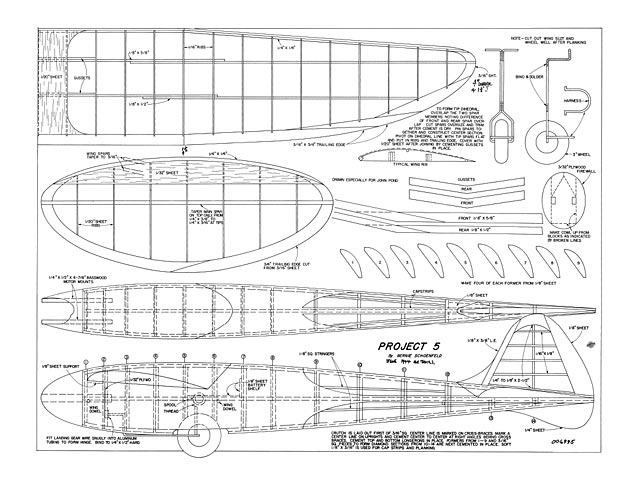 Quote: "Evolution of a Gassie, by Bernie Schoenfeld.

I DECIDED to build my dream ship in the winter of 1938, when rules limiting engine run to thirty seconds really began to show their effect in the design of craft. Models were being built extremely light and very much over-powered - the main idea being to 'get her up' as high as possible in the thirty seconds.

Many of the resulting designs were disheartening, but what could be expected? In order to keep the weight at a minimum the strength factor was sacrificed. Wings were made of light wood and a minimum number of spars were employed; a fuselage in many cases consisted merely of a few puny stringers whose sole purpose was to house a power-plant and secure the wing and tail at an established position. Obviously, the slightest mishap meant a major catastrophe. The ships just didn't have the strength to withstand any shock other than that encountered in normal flight.

I decided then, that my ship would have to withstand all the abuse it might come up against, and still be able to come back for more. I still had the problem of keeping the weight factor down, yet the design of construction which resulted was surprisingly simple to execute.

This type of construction was extremely light and had the strength where it was needed.

The wing and tail were elliptical in outline and employed the NACA 6409 airfoil. The leading and trailing edges were made of soft wood, but were laminated to increase strength. The rib outlines, top and bottom, were cut from soft 1/8-inch sheet, 1/8-inch square, and mounted on a single spar which was tapered to receive and act as a support between the top and bottom of the rib. The spar was the hardest balsa employed in the complete construction of the ship. One-sixteenth squares were used as auxiliary spars and cross-braces wherever necessary, solely as a buckling pre-ventative. After being covered with two layers of rubber model tis-sue and being adequately doped, the wing and tail assembly weighed six ounces. (Pretty good for a five-foot wing.)

The preliminary test flights were encouraging, for it was only necessary to make a few minor adjustments in the location of the center of gravity and incidence of the stabilizer to get the ship to turn in some really picturesque flights. I really felt as though I were on the right track, for, from the very beginning the ship performed as I hoped she would. The take-off was a sharp break from the ground with the nose steadily rising until the ship assumed an angle of approximately 40-45 degrees with the horizontal, which took about four seconds. She maintained this angle constantly with no dips or momentary stalls, traveling at a speed of about thirty miles per hour. But the real surprise came whenever the motor stopped. The plane would appear to stop dead in mid-air. It was on the verge of a whip-stall, and I would wait for it to happen - but it never did! Instead, the tail would rise in almost a snap motion, bringing the plane to a horizontal position, prepared to commence its gradual trip homeward. The glide was smooth and slow; about sixteen miles per hour, and, although she circled widely to the left in the climb, her descent was in a tight circling motion to the right.

I was well pleased with my results thus far, and immediately began to lay plans for Project No. 2. The first major change was the designing of a new fuselage which was not too much of a change from the original, except that it was built entirely symmetrical and more streamlined. The motor was more completely cowled in, and the wing was mounted on a permanently established wing rest. All incidence angles were built into the fuselage contrary to the original construction which allowed for shifting of wing and tail surfaces as well as the changing of wing and stabilizer incidences. This fuselage was considerably stronger than the first despite the fact that the construction time was pretty much the same. In an attempt to cut down the effect of complicated force moment arrangements, the wing was lowered slightly, bringing it closer to the thrust line (center of fuselage).

The position of the center of gravity was also shifted, so that it was now situated directly on the line of thrust, whereas previously it had been considerably lower so as to act more or less as a longitudinal stability factor. No changes were made in the wing or empen-nage or in the length of their corresponding moment arms from the center of gravity.

The flight characteristics of the new ship were rather interesting and somewhat perplexing for a while. Her speed was considerably greater than that of the original in every respect, from the take-off to the glide. The task of making adjustments was an extremely delicate proposition. She had to be handled with those proverbial kid gloves. Forces seemed to be arranged much too critically for comfort and she showed it in her definite spiral tendencies. This I later attributed to the decreasing of the lateral area in front of the center of gravity as well as the increased effect of outside forces, due to the increased speed..." 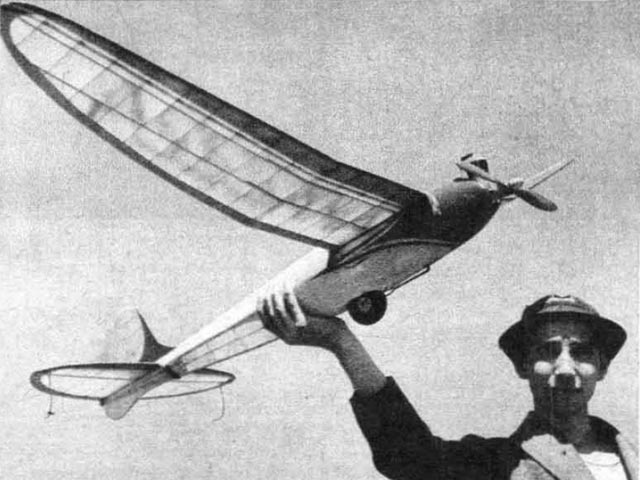