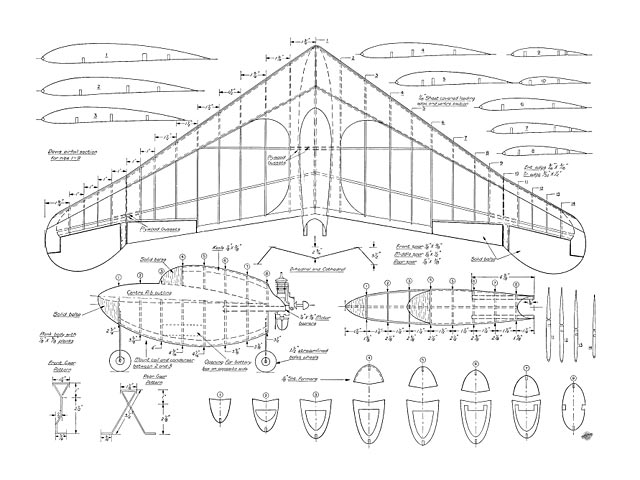 Quote: "Experimental Wing, by Bernard Schoenfeld. A flying wing based on the Northrop design. Sturdy and simple enough to be used for sport flying or experimenting.

THE model represented in this article is a true flying wing. The complete tail unit, including the rudder, has been totally eliminated, leaving only a wing and a pod-shaped body, which houses the motor and necessary ignition system. As a full-sized craft, this body would probably be eliminated, providing the airfoil section were thick enough to house the motor and necessary crew for the craft.

We have heard it mentioned that flying wings would have a greater wing loading in model work because the stabilizer unit which can be utilized to carry part of the weight of the craft has been eliminated. Actually, this is not true. When the tail assembly and long fuselage are eliminated, the over-all drag is greatly reduced so as to allow a higher speed and, thereby, greater efficiency and more lifting ability.

The model used in connection with this article is similar in outline to the Northrop Flying Wing. There are really few changes made except for the change in airfoil necessary because of the great difference in size, wing loading and speed. By virtue of its outline, I suppose it could be considered a semi-scale gas job but, nevertheless a job that is capable of turning in good performances. The airfoil, one of the Davis series for model work, was used with favorable results. In order to maintain the proper contour of the airfoil along the leading edge, where it is most important, a thin sheeting was used which also supplied additional strength to the sturdy wing construction. Basswood spars and ribs make it almost indestructible.

The fuselage, although of balsa because of the planking, is well capable of withstanding the most severe shocks encountered by a model in its test flight period. Actually, balsa wood, if obtainable, could be used throughout without suffering any noticeable loss so far as strength is concerned.

Although the wing loading of the model greatly exceeded that required by AMA regulations, there was no indication of its interfering with the ability of the model to perform well. The only thing that some model builders might consider detrimental would be the speed, to which they are unaccustomed - but which actually greatly increases the efficiency of the airfoil. One of the most noticeable differences in this model, as compared with the average flying wing model that we see, is the absence of gaudy, over-emphasized, sweepback and rudders. The inner ailerons are moved to supply bank and turn, coupled with side thrust of the engine, while the outer elevators are operated in a manner similar to the elevator of a normal tail assembly. It is to be noted that for all practical purposes, the center of gravity should be located at about the 30% mark on the chord of the center rib. This keeps the center of pressure fairly uniform and allows for effective utilization of the control surfaces.

This model was not designed for contest work although it could probably be developed. It is an experimental job whose major purpose is to give the model builder the opportunity to observe for him-self the flight characteristics and aerodynamic reactions that take place in a flying wing. Most model builders do not have enough experience with flying wings to start off by building a contest job. What they do need is a firm little baby that can take it. This model serves that purpose. Its reactions to variation in control are definite while its inherent stability is great enough so that even a poor adjustment will not produce a disheartening effect.

Today sees us at the beginning of the flying wing era. Although the flying wing was conceived much before the type of craft that utilizes stabilizers, it was not considered practical for a long time; therefore, stress was put on development of craft along those lines that we see today. Now we are really beginning to put effort into developing flying wing craft. It is today's preview of the future. It would be wise to take cognizance of this fact and start seriously analyzing and working on the development of this type of craft rather than to consider it as an aerodynamic freak. From the model builder's standpoint, the greatest advantages of the flying wing over the more conservative craft are probably its compactness and its ability to be easily transported. Also advantageous is the fact that building time is greatly reduced and repair work less intricate.

For the most part, people are reluctant to change from what they are used to doing. This reluctance is greatly responsible for the retardation of advancement in a great many things. The model builder must bear in mind that he is dealing with an exact science and with an exact arrangement of forces. He must learn to overcome the influence of conventional shape and realize that new arrangements of forces necessitate changes in shape. The flying wing is not a freak. It is the next step. " 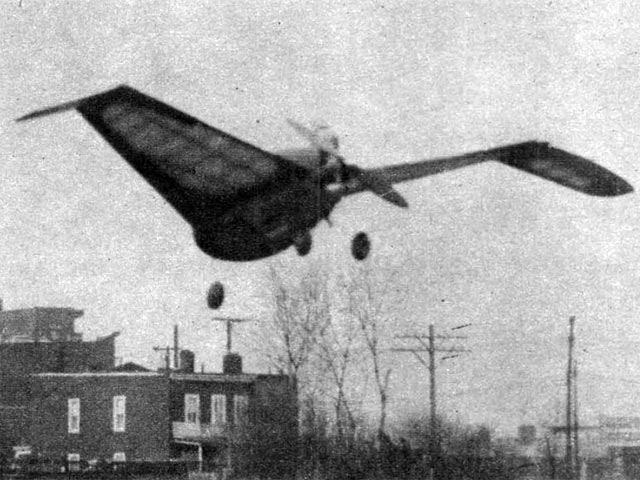 I have studied the plan and article to establish dimensions. As these specifications are missing from both, I would like to advise this basic detail of the model is a wingspan of 38 inches (96.5cm). October 2021.
Pete - 26/10/2021
Um, thanks. We currently have this listed as 38 inch span, see datafile section.
SteveWMD - 26/10/2021
Add a comment