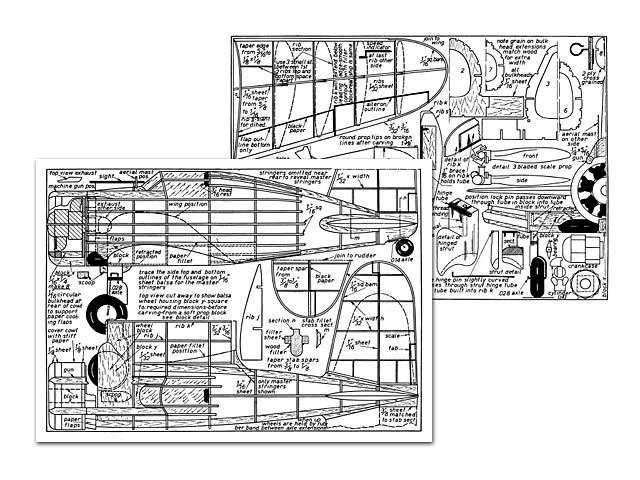 Quote: "A Vought Fighter That Flies. Complete Data from Which You Can Build an Excellent Performing Flying Scale Model of the US Navy V-143 Fighter, by William Winter.

THE new Vought single-place fighter is of all-metal construction and is characterized by its high performance.

Features of the armament and equipment are the two 30 calibre machine-guns and the racks for 300 lbs in bombs.

The model is accurately scaled and includes in its construction a workable folding landing gear. The model will fly with the wheels retracted, hand-launched over grass of course, a well as in the conventional manner. The little ship is a picture in flight or on the shelf. At time of drawing ship was experimental so paint all silver or blue fuselage and orange wings. Use star insignia.

Fuselage: Trace the side, top and bottom outlines of the fuselage on 1/16 sheet balsa and cut out the master stringers, allowing about a 1/4 in width tapering toward the rear as seen on the plans. On them mark the positions of the bulkheads.

Cut the bulkheads from 1/16 sheet balsa in accordance with the patterns given. Cut only the large notches for the master stringers marking the smaller ones for a later operation. Cement bulkheads No. 1 to No. 4 on the two side master stringers. When the cement has set, add the remaining formers. Note that No.8 is two ply cross-grained. The rear hook is bent to shape from .028 wire and fastened in this bulkhead. Add the top and bottom master stringers.

The center section ribs J and K are cut to shape from 1/16 sheet and cemented in place on the bulkhead extensions. Follow the details given in attaching the tubing to rib K. Reinforce and bind with thread as shown.

The wheel housing block which extends across the fuselage will snugly fit between the left and right ribs K. First trim this block down to its required outside dimensions before attempting any shaping. This prepared block is now cut to the top profile shown on the cutaway top view and in the detail. The portion of the block that fits within the body is left flat. The outer portion that extends from the outer rib J to the rib K is shaped to fit the wing as required. The wheel and strut cutouts are made on the bottom to a depth that will accommodate those parts when in the up position. Dimensions for the cut-outs are obtained from the block detail.

Cement the auxiliary 1/16 sq stringers in place cutting the notches already marked as the work progresses.

Shape the machine-gun covered troughs from 5/16 x 1/4 soft balsa and fasten them in position. They are made in two portions as seen on the plans the front sections being attached after the cowl is in place.

The front curved edge of the cockpit enclosure is bent to shape from 1/32 sheet. The headrest is 3/16 sheet..." 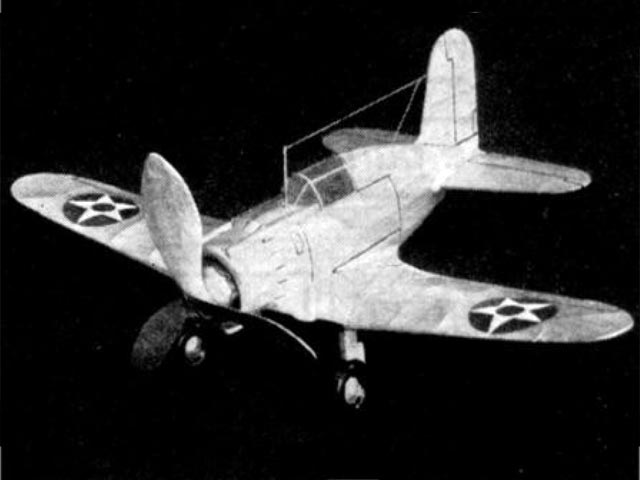