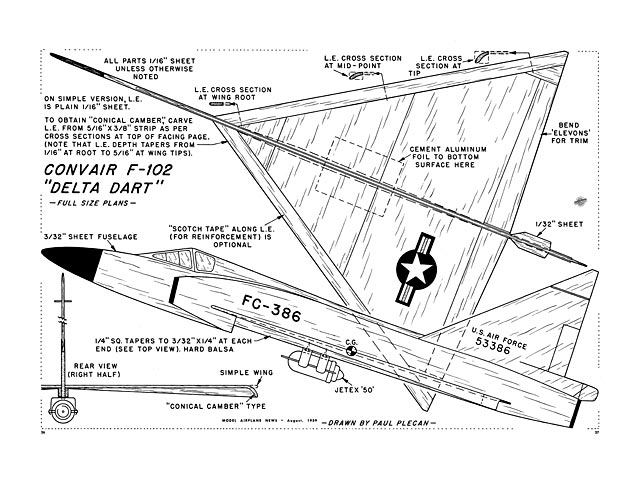 Quote: "Conical camber works on a model, too! Hand-launched glider and Jetex versions fly better. What is next? Convair F-102 Delta Dart, by Don Monson.

When Convair engineers tested the prototype of their delta-wing F-102, they were surprised to learn that it wouldn't go supersonic even with afterburner, especially since wind-tunnel tests showed that the delta wing had less drag than the swept wing while it was passing through the sound barrier. The main cause of this effect was the excessive interference drag between the wing and fuselage.

About the same time, two new aerodynamic discoveries were divulged by NACA scientists: (1) a reduction in interference and wave drag by application of the 'area rule,' popularly referred to as the coke bottle design, and (2) a reduction of the induced drag, ie the drag due to lift, by use of 'conical camber.'

Conical camber means that the leading edge of a delta wing has a progressive downward camber increasing in radius of curvature as it passes from root chord to tip chord (Ref 2). Theory and experiment show that both area rule and conical camber have maximum effectiveness in the transonic range, ie the transition between subsonic and supersonic flight, with conical camber being effective also at high lift co-efficients; and when Convair applied these modifications to their F-102, the result was the highly successful supersonic F-102A that you see flying today.

The model version of this plane originated when we began to wonder what the effect of conical camber would be on a paper glider. A few hours and several gliders later, living room tests showed a noticeable decrease in the glide angle of the glider with conical camber over the one without camber. Further glide tests in a gymnasium where more conclusive tests could be..."

Quote: "Hi Steve & Mary, Here are a couple more little Jetex plans from the 1950s that I have cleaned up. Back then I built and flew these mainly as catapult gliders, Jetex fuel pellets were hard to come by out in the Aussie bush.

The F-102 Delta Dart by Don Monson (from M.A.N.) does really fly better with 'Conical Camber', but carving the LE is a bit of a pain, (and time consuming). I worked out a 'short cut' [see plan sheet #2] using a long triangle of hard 1/16 in balsa, that seemed to perform just as well. I only have the first page of the Article, sorry." 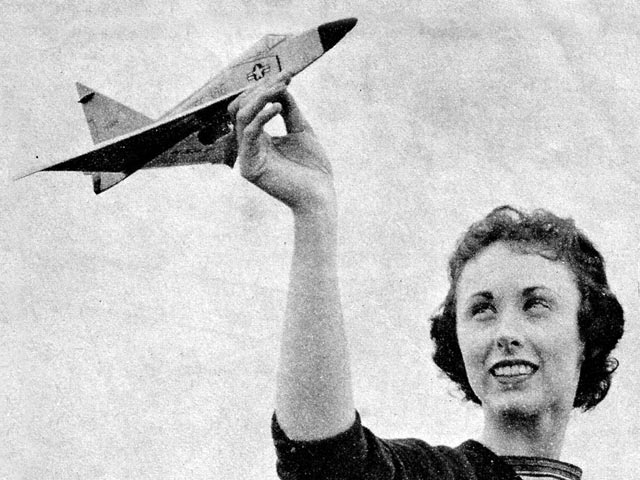 Another one from back in the day. I built one of these using the magazine plans and crappy Testor's balsa. That it flew at all is a testament to the design. Model magazines were beyond my budget at the time, but a bicycle ride to the library yielded stacks of magazines that you could actually take home with the help of your library card. Summertime left plenty of room at Girard Elementary School for model flight, as long as your creation wasn't too big.
Jetex rocket engines weren't all that successful in humid Alabama non-air-conditioned Summers, so it was best to use up the solid fuel pellets quickly before the moisture rendered them unusable. The fuel pellets arrived from England in a matchbox lid container, complete with a length of fuse for ignition. If you needed a short test flight, one pellet would render less burn duration, giving you time to make adjustments before contacting the earth. Two pellets would yield plenty of flight time (less than 10 seconds) to get it to altitude. Doesn't sound like much but if trimmed properly would get it pretty high. As the pellets soaked up moisture from dripping south Alabama atmospheric conditions, they became reluctant to light. Scoring the pellet surface with a pocket knife would help, for a while, that's why you needed to use them up quickly. Your included length of fuse presented another difficulty. It contained a tiny wire core, probably soft copper, which would clog the nozzle and limit the thrust if not pulled out after ignition. Fingers really weren't the best tool for wire grabbing, meaning you needed a pair of carbon encrusted long nose pliers in your pocket. It was a frantic ignition sequence to hold the model, light the fuse with your trusty wind-proof Zippo, grab your pliers and yank out the wire before gently letting go in the proper launch attitude. I still have those smutty pliers (somewhere) cast by Fox of magnesium in a vain attempt to use the metal in the most inappropriate manner possible. I also had a pair of wire cutters constructed in an identical fashion, which didn't last long trying to use them to actually cut wire.
The Delta Dart flew beautifully once adjusted properly. My assumption that its lack of ANY dihedral would be a problem proved unfounded, leveling out at the top of launch just like any free flight model, and better than most. Like all rocket engines, the faster it goes, the faster it goes, really moving by the end of burn. Then it would settle into a nice smooth glide with just a little turn whichever way it wanted to go. Lots of fun for a kid on a bike, small enough to carry. I don't think Jetex is available anymore, plenty of possibilities as a catapult glider.
Doug Smith - 19/09/2019
I think this a Delta Dagger the Delta Dart was a F-106
Ray Holland - 21/11/2021
I'd call it the Delta Typo :-) From 1957 on both the 102 and 106 were visible in airbase aprons and a careless eye might mix easily them up. No need to call the cops.
Miguel - 21/11/2021
Add a comment