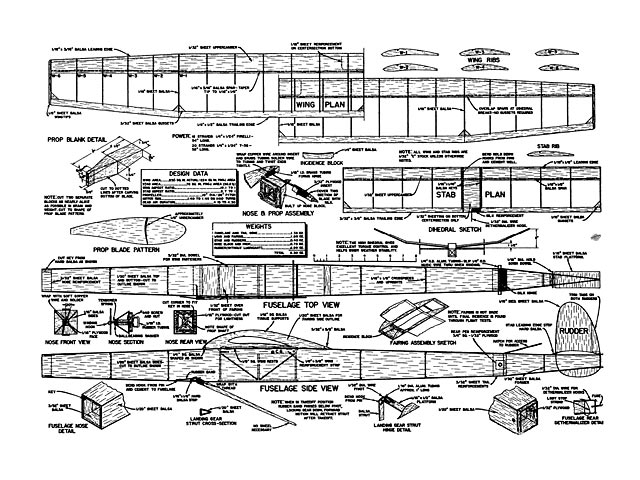 La Sorra is the result of two years of intensive development and research into all phases of Wakefield flying. The original model of this series was Haig Parechanians' 1951 New England eliminations winner. Ten different models were built and flown before the design emerged in its present form. This model combines simplicity with high performance - important when flying Wakeields. Every weak point in the structure has been eliminated and excess weight removed until the strength to weight ratio is much higher than that of the conventional type of structure.

The large area, high aspect ratio wing utilizes a modified NACA 6410 airfoil, giving a high liff-drag ratio and slow sinking speed. A 9% airfoil is used on the stab, whose 30% area has been found sufficient to assure stable flight in all kinds of weather. The high A/R stab gives excellent anti-stall charac-teristics and gets the twin rudders out of the prop blast. This makes it easier to adjust the turn without any danger of spiral dives. A fairing over the wing is used to meet the cross section re-quirement of Wakefield rules, while re-ducing the dead weight of a deep, wide fuselage. This results in clean wing-fuselage joint, with none of the troubles inherent in pylon wing mounts.

Perhaps the most unusual feature of the model is the sheet balsa fuselage, which has no longerons or closely spaced uprights. This is much easier and quicker to build than the paper-covered framework type almost always used on Wakefields. With the proper wood and careful workmanship this fuselage can be built as light as 1.1 ounces, and still be strong enough for Wakefield flying. There is no worry about cracking a longeron or breaking a few uprights. The sheet is easily repaired and will withstand crackups which would demolish a paper-covered fuselage. It is very rigid and will never twist under the strain of a fully wound motor. Previous models have been flown with a return-gear system and no structural problems developed from the additional stresses. The increased popularity of sheet fuselages in all kinds of gas models is evidence of their advantages.

Sheet covering is used on the wing and tail leading edges to preserve a true airfoil shape. Other types of wing structure have been tried, but the loss in performance offsets any gain from lighter weight. This type of construction will also survive landing in a tree.

While on the subject of light weight I would like to contribute a few thoughts of my own. The lighter the model the better it will fly on the same amount of rubber. However, too many Wakefield designers build a very light airplane - only to have it badly damaged before they can complete three official flights. At one time I was building models of this type which weighed less than three ounces, but something always seemed to break at the wrong time. Many superlight models get one terrific flight only to be broken before they can repeat. I think that 3-1/2 oz is a good weight for competition flying.

Models of this series have won many East Coast contests and got up to semi-final competition in 1951 and 1952. It has placed in every meet entered and has always made three official flights. Four members of the New England Wakefield Group have built these models, and all have been very success-ful. The first official flight of the model shown here was 4:19 in dead evening air, at the 1952 East Coast Challenge meet, held at Hicksville, Long Island, where La Sorra had high time of the contest and insured first place for the Boston team. My wife, Connie, built and flew her own model, placing fifth in the New England eliminations, and missed the semi-finals by only a few seconds.

Complete construction details are available on the full-size plans." 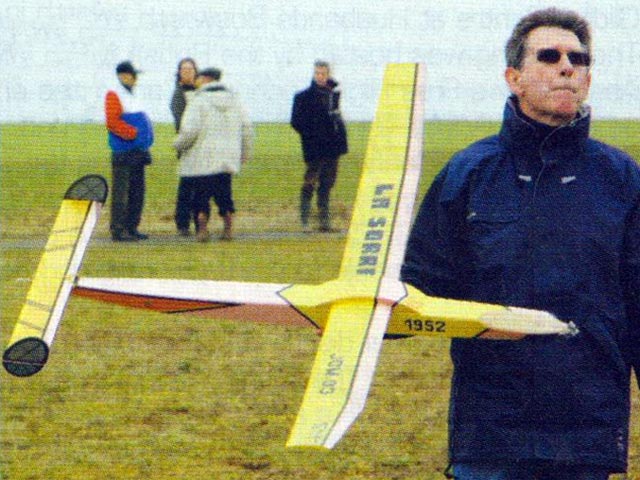