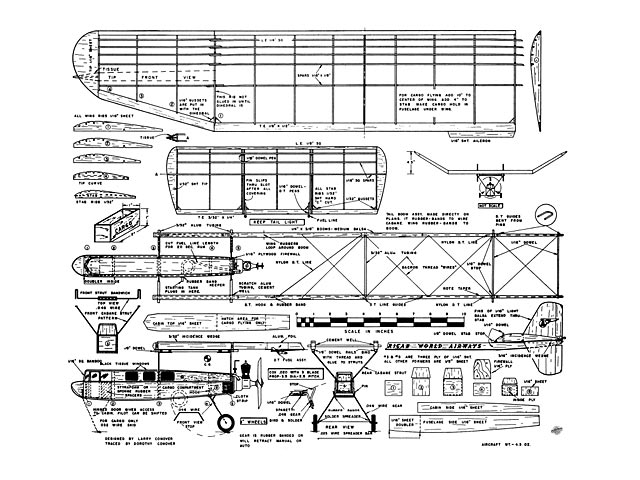 There is something fascinating about a flying boat. Way back in 1912-1914 Glenn Curtiss and others did some dandy ROW experimenting. Osa and Martin Johnson explored stone-age African lakes, rivers, and jungles with their twin engined Sikorskys. Pan American World Airways opened new aerial high-ways in the early 30's across the Carib-bean. They did it with the Sikorsky S-40.

A bit later (!) in 1959, Pan Am announced the 020 gas event for model aircraft competition. Clipper Cargo a la Pee Wee power was also included in their model aviation program.

Now here was a challenge. Take a bit of the legend of Pan American and its flying boats, design and build this spirit into a competition aircraft with all weather capability, and a potential for taking prizes.

The designing began with a little aerodynamic type thinking. So we have these features: The propeller is completely exposed, and the air which it thrusts backward is used only for pushing the model forward. No torque or turbulence wasted on dirty fuselages. The strut-mounted wing is high, away from fuselage or slipstream interference.

Weight and strength can be concentrated in the small fuselage. The tail booms, wing, and cabane struts are all rubber banded together. In even the worst crash, things just shift or rubber bands break. Nothing else, usually.

The dethermalizer is a standard pop-up tail, with its fuse placed forward to eliminate CG shift due to the long tail moment arm.

The takeoff gear is rubber banded to the fuselage for flexibility and simplic-ity. It can be made to retract either by hand, or automatically. This is done by different methods of wrapping the rubber bands around the gear struts, or the stop.

The pilot's compartment allows moving the dummy to adjust CG.

This is a multi purpose airplane. It can be used for Clipper Cargo by following the suggestions on the plans. Maximum load lifted so far is eighteen ounces on single flights. The little ship climbs so high as a payload gas model, that I have used it in regular 1/2A events.

Construction is a bit more challenging than the usual pylon model, but you can do it. Start by making the main fuselage box. Don't forget the 1/16 sheet doublers in the pilot's cabin. The cabane struts are sandwiched between plys on former #3 and #5. Note that #3 has strut arm pointing aft, and #5 is forward.

The top of the lower box is a piece of 1/16 sheet, cut roughly to shape, glued on, and trimmed later. When this is dry you can cut the opening for the dummy pilot..." 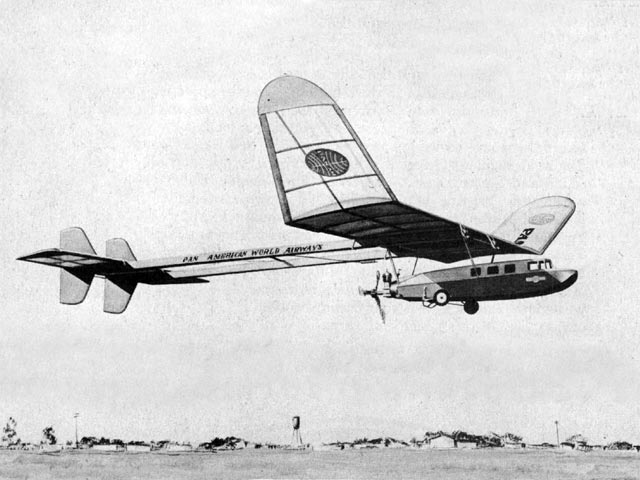