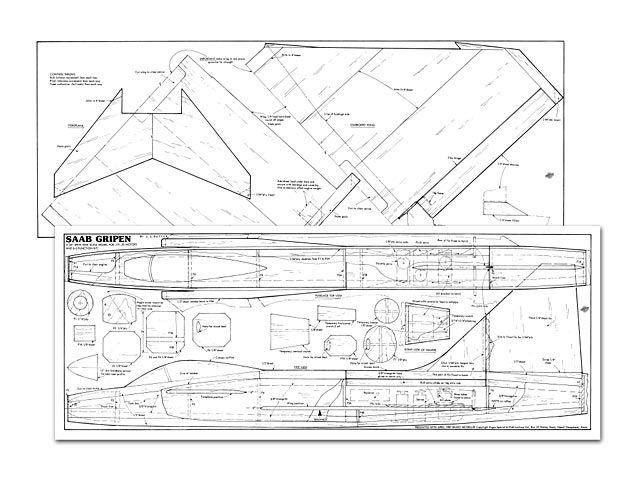 The Saab Gripen (Griffon) is one of the latest generation of air-superiority dogfighters, not to be confused with its stablemate the Viggen. Like the other aircraft of its generation it's a canard, the idea being that all the forces involved create lift (a tail has to produce a down force to point the nose up) and so the aircraft can turn tighter. The canards on the model are fixed, so it's hard to tell if they really make all that much difference but it will certainly turn tight if needed. Incidentally, if you have never heard of the Gripen before it probably has something to do with the fact that the full size prototype does not fly till June this year!

Let's get started: Construction of the model is straightforward but a little bit different in that it is a one-piece model and is assembled as such rather than wings and fuselage separately. The wings, canard and fin could hardly be easier to make as they are simply 1/4 in balsa cut to shape and glued together. Try to avoid very soft stock to make sure adequate strength is available. (Photo 1) Cut away the elevons after shaping the wing to section; I top hinged the elevons with film later.

Make up a pair of fuselage sides from hard 1/8 balsa reinforced with thin ply (Photo 2); I prefer to use 1/64 ply but there should be little practical difficulty with thicker material. Using a square of some kind, mark the position of the fuselage on the wing and canard and slide the pieces together. Check the alignment of the canard to wing in particular and don't have the wing too tight a fit in the slots. Glue the wing to the fuselage (not the canard yet) and add the formers F3 - F6 inclusive. Check that everything is straight. Note that the exact position of F5A can be adjusted to give adequate room for the R/C gear used.

Pull the tail in and add F7A, pull the nose in and add formers F1A and F2. F2 may vary in size and position with the motor/mount used but check its alignment very carefully. I used 5 minute epoxy to glue it as this gives a little time to make fine adjustments.

At this point I made sure that the engine mount would fit in, and fitted the fuel tank and canard. I opted to use a fairly small tinplate tank of around 3 oz capacity and built it in to keep the nose as strong as possible. You may want to do things differently. Now is also the time to add all the 3/8 in triangular section too. (Photo 3) The triangular strip between F5A and F6 forms part of the R/C access hatch eventually so it is only tacked in place. Glue the top and bottom sheet in place (remember about that hatch) and cut the slot for the fin. Glue the 1/8 ply F7 (you wouldn't like the battery to go through your expensive R/C gear in an accident, would you?) in place and make up the cruciform to support the temporary F8 from scrap 1/8 in. Plank between F7 and F8. Temporarily fit the motor and spinner (Goldberg is best but expensive) and mark where the top decking has to be carved to.

Remove the motor and get busy with the razor plane and glass paper. The aim is to get a fairly circular section but leaving the fuselage squarish under the wing makes it easier to hold for launch..." 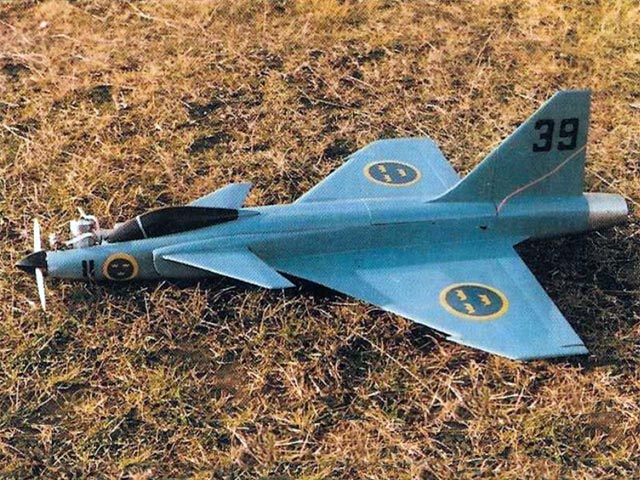