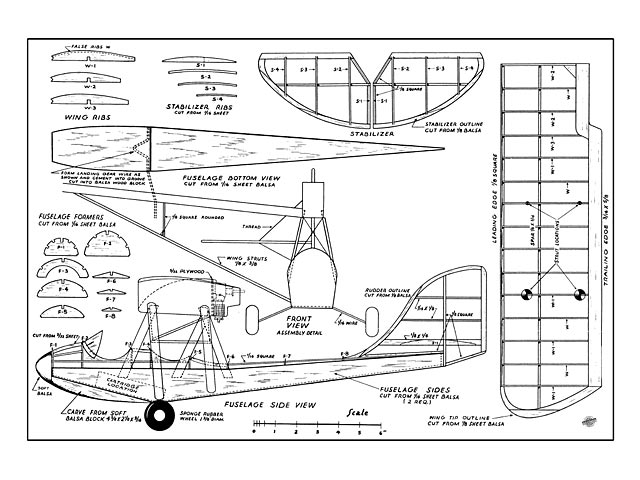 IT WAS during the summer of 1932 at the old North Beach Airport, better known now as La Guardia Field, that I first saw the Curtiss Junior. It was a warm sunny day and exceptionally calm, but rain had been predicted for the late afternoon. The usual Sunday crowd had come to witness a spectacular delayed parachute jump from 2500 feet. Wing walking and stunt flying were also on the program. All the activities had taken place as scheduled with the feature attraction, the parachute jump, being announced over the public address system. It seemed as though even the rain, scheduled for the late afternoon, was going to get into the act. Sure enough, over the public address system came word that the jump would have fo be called off due to high winds.

At this time I noticed a small lightplane approaching the field. It was a peculiar looking ship and one that I had never seen before. As it came nearer I could make it out much more clearly. It was a pusher type, two-place trainer - the Curtiss Junior.

The pilot was seated up in the front cockpit and seemed to be having considerable trouble bringing his little ship into the wind. The Junior dropped down in front of the hangars and it was evident that it was going to make the shortest landing on record. It was barely making headway and yet it seemed exceptionally stable considering the fact that it was hovering about five feet off the ground. Two field mechanics walked over toward the ship and from where I stood it seemed that they were talking to the pilot. Then it happened! One mechanic walked around to the opposite side of the ship and on a signal from the pilot the two mechanics literally pulled the Junior right out of the air.

The stability that this little ship showed at that time has always impressed me, but its feasibility as a gas job never seemed practical. In scaling up the Curtiss Junior- for Herkimer's CO2 motor, the propeller diameter is the basis on which the size of the model hinges. In our case, where a six inch prop gives excel-lent results, we wound up with a model having a wing span of 38 inches. Our model is absolutely perfect to scale ex-cept for changes in construction and a slight increase in dihedral. Even the wheels offer no problem as a 1W diam-eter balloon type wheel is easily obtain-able at your hobby dealer.

Here are a few of the specifications of our Curtiss Junior CW-1, taken from the characteristics sheet supplied by the Curtiss-Wright Airplane Co. The Junior is a two-place, low-powered airplane for sport and training. A 45 hp Szekely engine gave it a top speed of 80 mph and it cruised at 70 mph. Landing speed was 32 mph. Rate of climb was 600 ft. per minute.

Even a quick look at the plans will show you that this model is amazingly easy to build. We have tried to keep construction easy enough for the beginner who is taking that important jump from rubber models to engine-powered flight. In choosing your balsa wood, remember that the flying weight of the finished model should not exceed 7 ounces.

Fuselage: Lay out the bottom view on a sheet of 1/16 medium soft balsa. Only one is required. Do the same for the sides, which are also cut from 1/16 sheet. Cement sides to bottom, working back toward the tail. While this is drying, cut out all the formers. Cement formers in their proper location.

When everything is lined up perfectly - which it should be if the sheet bottom and sides were cut accurately - add the stringers. A soft balsa block 4-5/8 x 2-1/8 x 9/16 in is now firmly cemented to the underside of the fuselage and carved to give roundness up at the nose. It also adds strength to the under side of the fuselage on bad landings. The fuselage section at F-1 is pretty much of a perfect circle, so keep this in mind when carving the lower block. When satisfied with this shaping operation, firmly cement the soft balsa nose block in position and carve to shape.

1/32 sheet is used to form the cockpits. Bend the landing gear from 1/16 music wire and cement it firmly to the underside of the balsa block which has been previously grooved to receive it (refer to fuselage bottom view of the plan). Small washers are soldered to the wire on either side of the wheels to keep them properly aligned.

The motor mount struts are now cut from 1/8 x 3/8 medium hard balsa. The rear inverted 'V' strut is best assembled first, before installing. As can be seen from the front view, these struts are beveled at the lower end and cemented directly to the sheet balsa fuselage sides. The struts enter the fuselage between the lower stringer and the sheet side.

Engine nacelle is cut from a medium balsa block 1 x 1-3/4 x 3-1/2 in and shaped to the side view. Note in the front view that struts are recessed into engine block. This is very important as the strength of the entire engine unit depends upon how securely the struts are attached. A piece of 3/32 plywood is cemented to the engine block and the CO2 engine is attached to it with three 1/2 in wood screws. 2-56 machine screws may be used in place of wood screws, but they are not essential as engine thrust is against the block, and being located in the rear, the engine is fairly safe on bad landings.

The air tube is neatly bent and fastened to under side of engine block with straight pins, bent to form small staples. A drop of cement will more than hold staples in place. Cartridge holder is slipped into fuselage through front cockpit..." 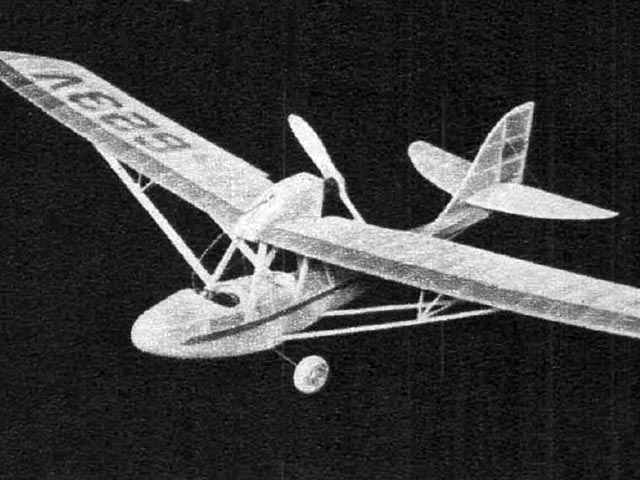