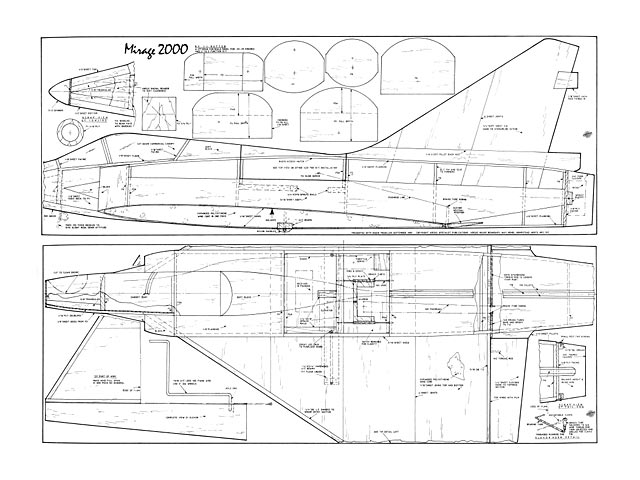 Quote: "This particular model represents something of a record for me in that it took me about four years to build it instead of the usual two or three weeks! Not that there is anything difficult about the model, it just happened that I went off the idea with the model three-quarters finished, when I realised that the original idea of powering it with a diesel would ruin the Solarfilm finish very quickly.

Only when a suitable glow motor became available did I bother to dig it out again, hence the lack of actual construction shots - I'd already built it before I thought about publishing it! The model is a typical delta in that it is quite fast in a straight line but loses a lot of speed in manoeuvres other than in the rolling plane, due to the airbrake effect of the wing. The roll is very fast and reasonably axial considering the need for slight 'up' all the time on the eleveons. Despite its speed the model is also capable of flying very slowly and the typical landing slide (you could hardly call it a run with no wheels) is very short.

Other than some shortening of the nose to lessen the need for tailweight, the model is quite close to scale and, like most of the Mirages, has very appealing lines (to me at least).

Getting cutting: Construction begins with the wing which is foam with balsa skinning in the case of my model - though veneer would be cheaper. In answer to those wondering how to cut a delta wing with a hot wire cutter my answer is that I didn't. I carved and sanded it instead. The foam core is a piece of 1 inch thick styrene from the local DIY store, cut to shape with a very sharp kitchen knife.

The thickness of the LE and TE is marked symmetrically about the centre of the foam and lines representing the basic flattened aerofoil section are marked on the top and bottom of the wing. The knife is then used to rough cut the section before finishing it off to a smooth shape with new glasspaper and very light pressure. To keep the foam flat I made the top section first and skinned it with balsa before starting on the bottom section. Needless to say, this demands a certain level of confidence that you are going to get it right - foam is very cheap compared to balsa.

Once the skinning is done the hard balsa LE and TE are added and carved and sanded to blend in with the aerofoil. The control surfaces are 1/4 in medium, carved and sanded to a more or less wedge-shaped section. I top-hinged the elevons with film on my model but I realise that other builders have their preferred methods.

The control arms on my model were my usual flattened and bent brass tube soldered to 14G piano wire torque arms. At this point I covered the wing with the base colour film..." 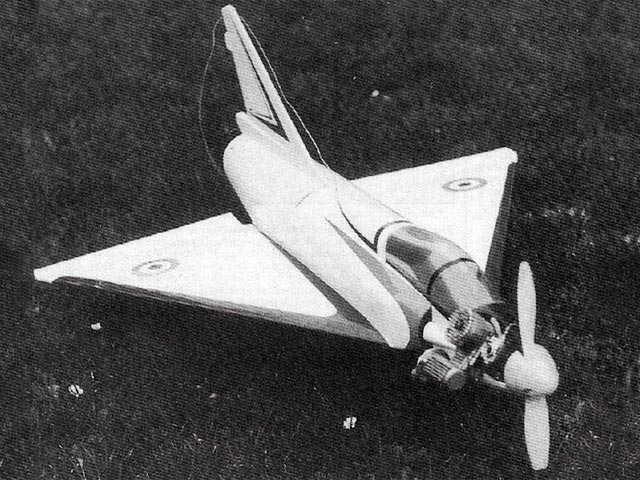