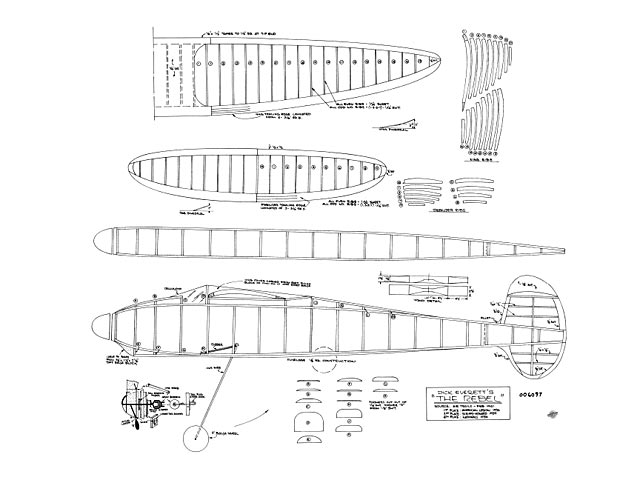 Quote: "Stop! Here's that design you'll want for next season. It has class, performance. Nice construction, too. The Rebel, by Dick Everett.

THIS ship is the product of six years of experimenting with Wakefield models. Its forerunners have been very successful and have placed high in many contests, including fourth in the finals in '36 and second in the '39 Scripps-Howard contest and first in the American Legion contest in '36. The ship itself was designed primarily for something different with a pleasing appear-ance, all of which went hand in hand with streamlining. The climb is very fast and the glide one which you dream about. It flew right off the drawing board, so to speak, and required very little adjustment except on downthrust.

One very distinctive feature is the high stab which pulls the ship out of an impending stall in the true manner of a pilot. The elliptical wing and dihedral make the ship laterally stable and it has never gone into a steep bank. The retractable landing gear works very well and the ship makes very smooth unassisted take-offs. The wing-tip skids allow the model to land without the tips touching, and the wheel protruding stops nosing over, all in accordance with the new rules. Now let's get to work.

The first thing to do, as usual, is to make the two fuselage sides and join them. This construction is made entirely from 1/8 sq hard. The formers and stringers are then added. Make the nose block and cement in place. The final shaping is done after the cement is dry. The folding tail boom is now made, taking care that there is no play in the hinge to allow the tail to slop around. Shape the nose blocks and cover the portion indicated with sheet balsa. The windshield is then made, the wing platform built and the holes for the rubber established. The retractable landing gear is next; take care to allow enough tension in the rubber band to hold the landing gear securely in place when up. The rudder is made, taking care to cement the top in place securely, for it has to take, a lot of stress with the elevator on it. The fuselage and rudder are then covered with silk, preferably wet to get around the curves. It is a good idea to sand all the frameworks thoroughly before covering. Four thin coats of clear dope are then brushed into the silk, after which it can be color-doped or striped.

Use soft balsa wood for the leading edge, as it has to be bent to shape. It should taper from 1/4 x 1/2 in at the center of the wing to 1/4 sq at the tip end. In cutting out the ribs for the wing and stabilizer, do not forget to mark the little center line in ink on each rib. When these center lines are lined up with a straight line on the workbench, the leading edge has been bent to the proper curve, and the trailing edge may be added.

The three-inch dihedral is made in the usual manner. After the wing has been covered, it should be sprayed with water and propped up so that the tips are off the workbench 5 inch. Now weigh down the center with odds and ends until it rests on the workbench. You now have the proper elliptical dihedral. Allow to dry in this position. Two coats of- dope are brushed on with-out removing the wing from its 'weighed-down' position. Before removing the wing to dope the under surface, allow the dope on the upper to dry thoroughly.

The elevator is made in exactly the same manner as the wing except that there is no curved dihedral. The elevator spar tapers from..." 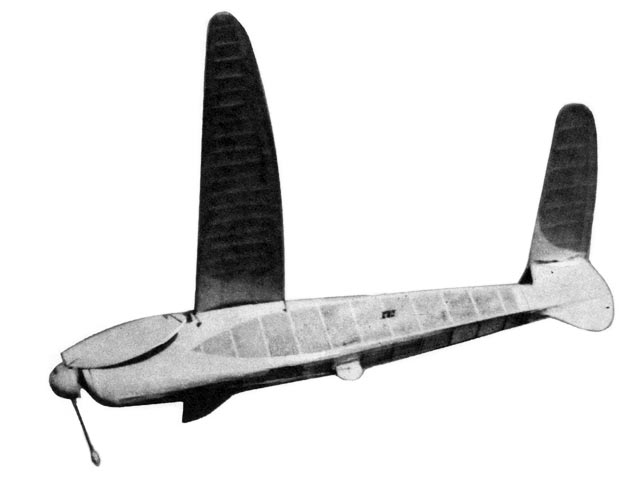