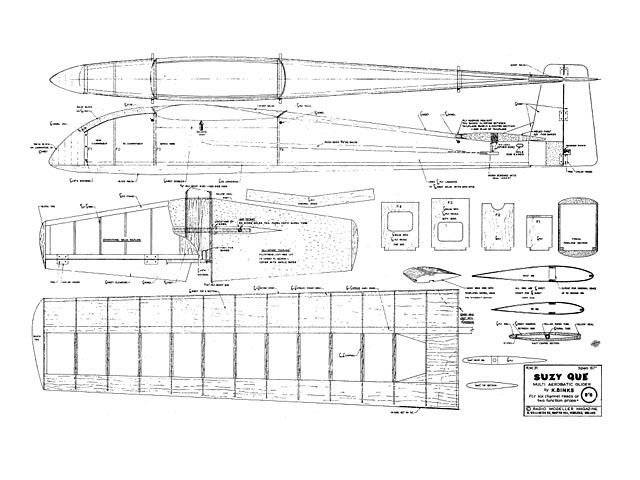 THIS model is the result of an effort obtain as many manoeuvres as possible from a model without ailerons, using a six-channel reed system. Ailerons or not, the most difficult manoeuvres, of course, are the outside loops, inverted flight and a true 'leaf' spin.

The wing, being the most important part of any design, was undertaken first. The aerofoil section, Eppler 374, is fully aerobatic and, with a thickness of 11% is extremely fast - yet, with a little up trim, the model becomes as docile as you like. The tips are 7-1/4 in chord, because tips under about 6 in generate very little lift, and a model with narrow tips will stall and drop a wing very easily at low airspeeds. The aspect ratio of 8:1 sounds a little low for a soarer, but I have found this a good compromise for aerobatics, using rudder and elevator. The set-up allows truly stalled spins with ease, while inverted flight, vertical eights, loops, outside loops, spins, inverted spins, stall-turns, flick- and barrel-rolls are just a few of the manoeuvres of which Suzy Que is capable - without ailerons!

The small drawings reproduced in the 'Seadog' newsletter obviously left something to he desired as to accuracy - inevitable with stencil duplicating - and also the CG was omitted, so I am glad that the plan is being published in Radio Modeller - especially as I keep getting asked for details of the new all-moving tailplane!

Construction: Here are some general pointers on construction, with a few notes on the special features, basic knowledge of building techniques being assumed.

Fuselage: this is built with laminated sides, 1/32 ply with 3/32 balsa, contact-cemented to them with Evo-Stik. The 1/4 in sq strips are to give glueing area for the bottom 'block', which is 1/2 x 1/4 in sheet, laminated. The formers F3 and F4 are laminated, but F1 and F2 are 1/4 and 1/8 in ply respectively. The fuselage sides are flat on the bottom edge to facilitate building it on the board, when accurate aligning of the fin, and the wing and tailplane platforms is simplified. While on the board, the top block (1/2 in) may be added. The fuselage can then be removed and completed with the addition of the bottom block. The hatch cover is formed from scrap balsa pieces cut to fit to a pre-curved 1/32 ply base, so that the curve is maintained.

The 1/8 balsa wing doublers make a strong seat for the wing, and also provide glueing area for some 1/8 in sponge for the wing to rest on. (The best source I know for this material is Woolworth's foam innersoles!) The nose may be bound with bandage to prevent its bursting open in a high speed crash, (if you go in for this type of advanced manoeuvre).

The installation of equipment is left to the individual, as everyone has his own methods and ideas for his own particular gear, The original had 3 Bonner/Soraco servos, with an 'in-line' trim-bar. With the RCS Digi-Three now installed, of course. only two servos are used. The fuselage was given one coat of clear cellulose dope and four coats of Kingston Diamond polyurethane.

Wing: The ribs are cut out using the 'sandwich' method and a 'Zip' razor plane - a real time-saver. (Oh, so that's where the phrase 'zip-zip section' came from! - Eds.). The spars and leading edge are all spruce, to allow some flexibility. The 1/2 in ply (yes - half-inch ply!) dihedral brace is sandwiched between the parts to give maximum strength - and to hold the wing together in the most violent manoeuvres. The 16g wire let-in to the leading and trailing edges is a must, to prevent the wing-retaining bands from cutting into the wood... " 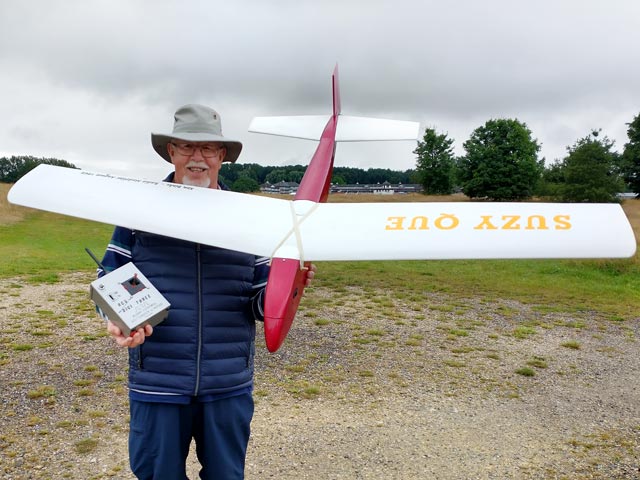 Still an excellent model to start slope soaring.With the throws increased the Suzy Que can perform many manoeuvres not expected with a two function glider. Its uncanny how axial the rolls are! the generous dihedral which facilitates this amazingly doesn't compromise inverted flight. Writing this has me tempted to build another some 51 years later!!!
Ken Binks - 05/07/2020
Hi Steve, hope you're keeping well. Some photos to accompany the Outerzone plans. Here is Ken Binks himself posing with my Suzie Que model [main pic] , plus a recreation of the Aug 1969 RM cover [pic 007, 008].
Phil_G - 24/08/2021
You can find my build blog here: https://www.andy-green.co.uk/suzyque/
Andy Green - 10/11/2021
Add a comment